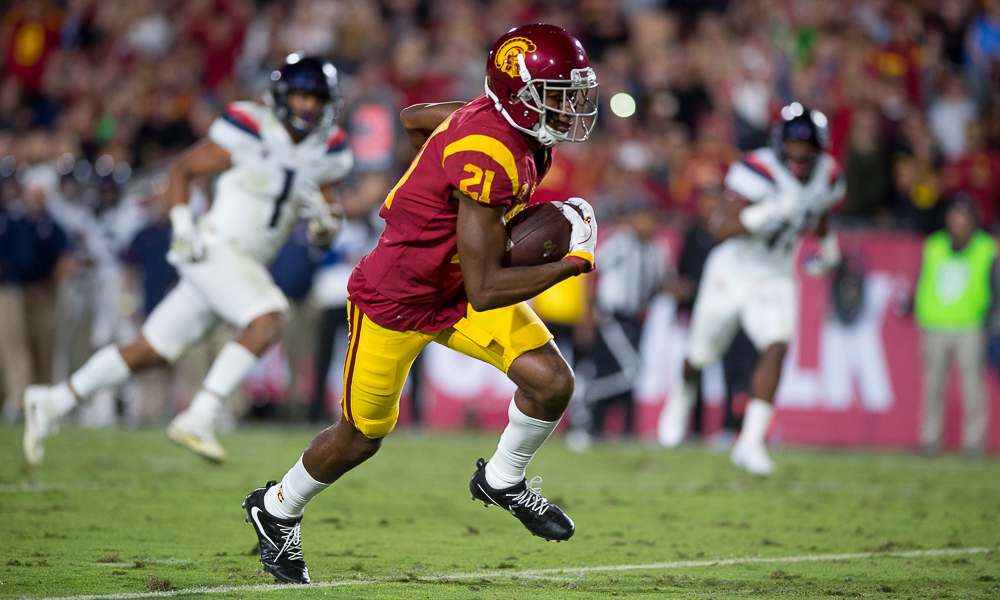 One of the biggest revelations from the scrimmage last Saturday was the play of Velus Jones, who had three big plays including a pair of touchdowns as he provided a speedy downfield option that hadn’t been present too often this spring.

Not only was it good to see Velus continue to advance his game this game but the Trojan wide receiver group needs someone to step up outside of Tyler Vaughns and Michael Pittman. We know what those two can do but outside of that there is a surprising amount of uncertainty as we wrap up spring and head to fall.

Vaughns has been the lead receiver through spring as he picks right up where he left off in the fall. Josh Imatorbhebhe would probably be the next name up on the outside as he has definitely shown flashes of using his athletic combination of size and speed, some really good run after catch results. Josh just needs to stay consistent (and stay healthy).

Pittman is right there with Vaughns when he is healthy and they form a very nice starting duo on the outside. I was hoping to see Randal Grimes take a big step up this spring with so much opportunity but we just didn’t see it as Randal was banged up a bit. All the skills look to be there with Grimes, we’ll see where it goes in the fall.

In the slot, Trevon Sidney took the #1 snaps for much of spring while Velus Jones was working at tailback to help with depth at that spot. Sidney has skills and can make some acrobatic plays but didn’t show enough yet to make a real case for the job, and the play of Velus lately will most likely have him leaving spring in the lead role. Pie Young is also in that rotation when healthy.

You’ll notice there’s not an awful lot settled as far as depth, which was obviously hurt in the off-season with the departures of Deontay Burnett, Jalen Greene and Joseph Lewis. That’s a guy who could have pushed for the all-time reception leader at the school, a versatile senior and a former #1 WR in the nation.

The good news comes in the fall in the form of Amon-Ra St. Brown and Devon Williams. Of the two, St. Brown is the more ready made to contribute from day 1 and it will be interesting to see where the coaches put him. The natural inclination is to have him in the slot, I think he could work well there with his physical style and Velus could offer a change of pace to him. But Amon-Ra can also work as an outside receiver to stretch the field, maybe not the pure speed of Velus but a game-breaker for certain.

Williams will be a reserve on the outside and he’s a physical mismatch but it will be about learning the fundamentals of the position as he’s never been a full-time receiver. I will say this, there aren’t many incoming freshmen who pass the eyeball test like he does when he visits for spring ball. Pretty much anyone who sees him has the same reaction “that’s a big one”.

Another reserve option coming in the fall will be John Jackson III, and he brings a 6-2, 195 frame with the possibility of playing in the slot.