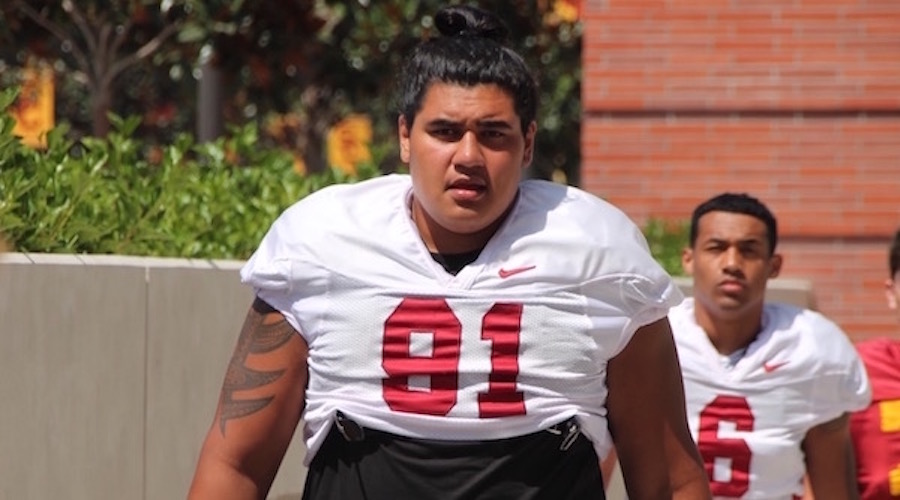 This could be one of the stronger defensive fronts that the Trojans have put on the field in recent years when you consider the combination of depth, experience and overall talent.

It starts in the middle at nose tackle where Brandon Pili manned the starting spot in spring. Pili saw action in the second half of last season after injuries to others at the position pressed him into action. The so-called “Dancing Polar Bear” performed well with his energy and raw skills, and you have to imagine his game will only get better with more time in the system. He certainly looked like he is ready to be a starter based on what we saw in spring.

The player we didn’t see in spring was Marlon Tuipulotu as he continues to recover from a back injury. All signs continue to point to him being ready and available for fall camp, and he would form a pretty dominant 1-2 punch with Pili in a rotation. Another option is Jay Tufele, who can play along the line at multiple spots and filled in as the reserve nose tackle this spring with Marlon out of action. Jay was able to redshirt last year and he is ready to get on the field. There is also a freshman arriving in the fall in Trevor Trout.

At defensive end, Christian Rector steps in for Rasheem Green as a veteran option, and we also saw last year that Rector can be effective as an OLB/edge player from when he filled in for the injured Porter Gustin and earned 2nd team All-Pac-12 honors. We will see Christian line up at either spot depending on the style of offense for the opponent. Caleb Tremblay was the primary #2 this spring as a junior college transfer and he brings a lot of physical maturity and energy, but there was also a transition to a different level of football at times. As mentioned above, Tufele can also be an option here as well.

We don’t always see a 3-down lineman set but when we do Malik Dorton is the starter. Malik has worked his way into a reliable senior presence and the coaches have a lot of trust in him. Keep an eye on Connor Murphy in this spot as well as he moves inside from his outside linebacker spot. Connor will be looking to add more bulk between now and fall camp in order to handle the workload and Helton seemed to think he got off to a good start with the move based on what he saw in spring. Liam Jimmons has size for run-heavy packages. Jacob Lichtenstein was out for much of spring with injury but should return for fall.