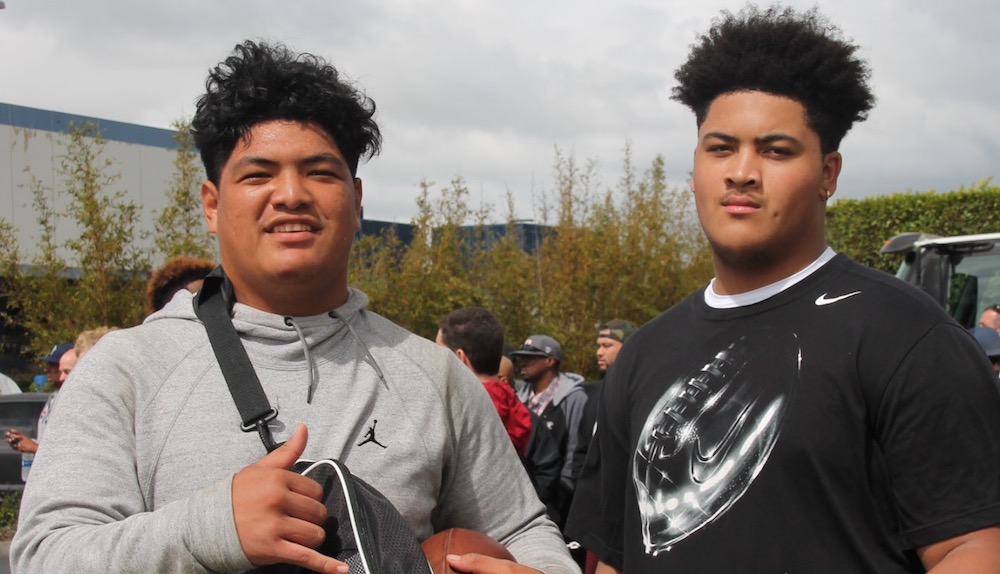 I had the chance to view The Opening Regional down at Charger Practice Facility this past Sunday . . . and as usual, it was well worth the visit.

First, having the chance to watch the top recruits in the West, along with hearing the thoughts of GarryP and seasoned scouts like Randy Taylor is truly a treat.

Here were some of my thoughts on key recruits in the 2019 cycle, and some other tidbits . . . you may notice a strong Mater Dei-St. John Bosco theme running through the commentary:

Class of 2020 recruits Bryce Young (Mater Dei) and DJ Uiagelelei (St. John Bosco) are officially Siamese twins now. If you find one at a camp, you’ll probably find the other. And while they will be compared to one another for the forseeable future, they could not be more different physically:

· Bryce Young showed the quick release and good mechanics in the drills. The only drawback . . . his size. He is about 5’11, and 180lbs with a big breakfast.

· DJ Uiagelelei is bigger than most defensive ends, and displayed quick feet in his drop-backs and a cannon arm. One scout remarked that his only drawback is a slow release.

· Orange Lu’s Ryan Hilinski (class of ’19) came away with the MVP of the QB group. He will throw for a million yards with that WR corp he has to work with.

Sean Dollars of Mater Dei and George Holani of St. John Bosco were the standouts. I was disappointed I didn’t locate Jordan Wilmore (Leuzinger HS) and Kenan Christon (Madison HS in San Diego) who both have offers from SC.

· Dollars may have been the best performer at the camp regardless of position. He is explosive, with that phone booth elusivity. He runs with a lot of bounce, and made a lot of blue chip LBsreach for air in the one on one drills.

· Holani is impressive physically. He is light on his feet and did very well in the pass blocking drills.

Physically, the TE group was ridiculous with 4 or 5 guys standing 6’5 or more with a lot of size.

· Mike Martinez (Mater Dei) looked like an NBA power forward. The kid has a nice pair of hands, and was un-guardable at the catch point. He’s not fast, but that’s because the kid wears a shoe size that a scout said has to be special ordered.

· Jude Wolfe (St. John Bosco) checks all of the boxes. He’s got excellent hands, runs good routes and is huge.

The WR class is not as stacked as it was last year, but there were plenty of good ones on display:

· Bru McCoy (Mater Dei) was a guy I thought may be a TE . . . not anymore. He has a college body, catches the ball in traffic, and runs very well for a kid pushing 220lbs.

· Kyle Ford (Orange Lutheran) is another college ready player. He was tremendous in the WR-DB drills.

· Jalen Johnson (Roosevelt HS in Corona, CA) was a pleasant surprise to me. He ran the best routes of any WR I saw, displayed good hands, and better than average speed.

· Stanford commit Colby Bowman (St. John Bosco) was also very good. He competed in the fastest man race and had some nice catches in the WR vs DB drills.

It was the usual suspects who stood out in the OL drills:

* Jonah Tauanu’u (Narbonne HS) is the prototypical OT in size. He had a little trouble with the speed rushers, but had some very good moments too.

* Washington commit Nate Kalepo (Rainier Beach HS in Washington) has good feet and is just hard to get around at 6’6, 300lbs

* A guy who came from nowhere was Logan Sagapolu (Skyridge HS in Utah) who looked good at Center and at Guard. He looks a little shorter than his listed 6’3 height, but at 320lbs, he just sat down in his blocks with a ton of leverage and was hard to move. He had more pancakes than anyone I watched. He put himself on the map at this camp.

* Another guy I liked was Luke Felix-Fualalo (Mater Dei). He has great size (6’7, 300lbs), and looked very good technique-wise at OT.

This was one of the few camps where I thought the defense got the better of the offense overall . . .

Here’s what I observed from some of the standouts:

* DE Kayvon Thibedeaux (Oaks Christian HS) – this kid plays with the enthusiasm of a JuJu Smith-Schuster – dancing between reps, calling out opponents . . . all with a killer first step off the snap of the ball.

* DE Drake Jackson (Centennial HS) – a really good day displaying multiple pass rushing moves. His dad had on more Trojan gear than I wear . . . so I think we know where the family is leaning.

* NT/DT Kenyon Ware-Hudson (Mater Dei) proved he’s all the way back from the knee injury. He’s your prototypical fire hydrant in the middle of a DLine.

* Justin Flowe (Upland HS – Class of 2020) is an alpha dog. Physically imposing, ultra-competitive and usually the winner in any match-up. . . except RB Sean Dollars.

* Mase Funa (Mater Dei) was a guy I went into the camp thinking he was an Inside LB prospect. Not anymore – the SC offeree has what it takes to play that Uchenna Nwosu OLB position. Funa also displayed some coverage saavy with an INT in open field drills against the TEs.

* DeGabriel Floyd (Westlake HS) had a very good day. The former Trojan commit was the only LB to corral RB Sean Dollars in the one on one drills.

* Chris Steele (St. John Bosco) was overall the best in coverage. A very competitive guy who had tremendous foot work.

* Jordan Patterson (Narbonne HS) is going to blow up on the camp circuit this Spring. The 6’3 DB was very aggressive in coverage, displaying speed and power.