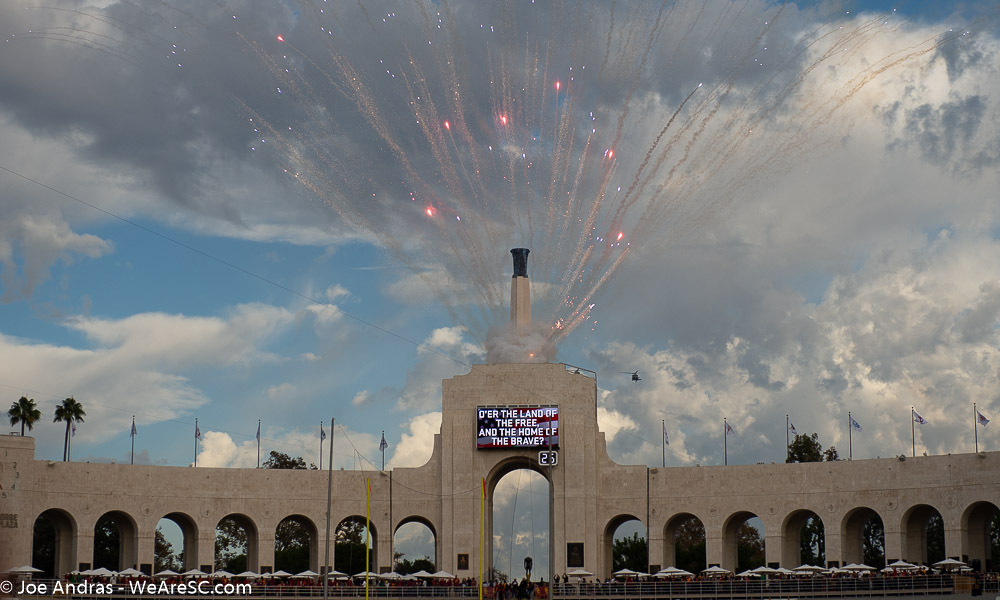 While there is certainly a massively more important worldwide focus right now, a combination of missing March Madness and USC Trojans spring football, as well as some free time thanks to social distancing, has given us an opportunity to get a little creative in our coverage for the time being. And with it, we’re asking WeAreSC readers to come together to select the best USC football game of all time.

Be sure to check out and vote in our previous three quadrants:

Today, we’re looking at the “other” quadrant, with a national championship vs a No. 1 vs No. 2 matchup, and a pair of Northern California rivalries going against each other.

A game-winning touchdown pass with just two seconds left would make any matchup an instant classic. The fact that it happened in a game that pitted the Nos. 1 and 2 teams in the nation makes it even better.

Like many other games that have made this list, USC found itself down multiple times in this game. With Oklahoma leading 17-7 late in the first half, the Sooners muffed a punt and the Trojans capitalized, thanks to a fourth-down conversion by tailback Marcus Allen and a touchdown pass by quarterback John Mazur.

Oklahoma eventually went back up by 10 with just 13 minutes to play. USC again converted a fourth down, and Allen capped off the drive to cut the Oklahoma lead to 24-21. After forcing an Oklahoma punt, thanks to another Sooner fumble (Oklahoma fumbled 10 times–10 times!–in the game and lost five), USC took over at its own 22-yard line with 4:30 left in the game.

On the ensuing drive, USC again had to convert a fourth-down play–a Mazur sneak for two yards and a first down (USC then let 12 seconds run off the clock before calling a timeout). An incompletion and a near Oklahoma interception left USC with a third-and-10, which it converted with a pass down to the Oklahoma 7-yard line with 17 seconds remaining.

On second down, Mazur threw to a wide-open Allen in the endzone, but tight end Fred Cornwell came underneath and tipped the ball into the air, thinking the pass was intended for him. Then on the next play, with nine seconds left, Cornwell redeemed himself, catching the game-winning touchdown as Mazur scrambled to his left.

Oklahoma fans knew it would be a Sooners blowout. They couldn’t have been more right and more wrong at the same time.

In a BCS Championship Orange Bowl matchup, the No. 1 USC Trojans absolutely obliterated the No. 2 Oklahoma Sooners, 55-19.

Was this objectively a great game? Absolutely not. Does it belong on this list? Absolutely yes.

There are few 15-minute periods USC fans have enjoyed in the history of Trojan football more than the second quarter of this game, when the Trojans took a 14-7 lead and stretched it into a 38-10 halftime lead that was pure dominance.

USC safety Jason Leach picked off Oklahoma quarterback Jason White and the Trojans quickly capitalized with a 54-yard touchdown pass from Matt Leinart to Dwayne Jarrett. USC cornerback Eric Wright then picked off White and Leinart found Steve Smith for a five-yard score. Smith scored again as he hauled in a 33-yard touchdown pass while falling to the ground for the second of the Trojans’ highlight-reel touchdowns–tight end Dominique Byrd got the Trojans on the board with a spinning, one-handed touchdown grab in the first quarter.

The second half was a victory lap for the Trojans, as USC ran the lead to 55-10 before settling for a 55-19 win and a national championship.

USC racked up 525 total yards, forced five turnovers and helped Trojan fans to a 60-minute celebration in what certainly qualifies as a great game from a USC fan’s perspective.

There can’t be many college football games in history where offensive records were set and a combined zero points were scored in the fourth quarter. But that’s what happened when quarterback Aaron Rodgers and Cal came to the Coliseum in 2004.

Cal had upended USC in triple overtime the previous season, costing the Trojans a chance at an undisputed national championship, and Rodgers was having the game of his life for the No. 7 Golden Bears. He tied an NCAA record by completing his first 23 pass attempts of the game and got the ball back with 4:30 left at his own 35-yard line.

Cal marched down to the USC 9-yard line and Rodgers’ only incompletions to that point had been passes he’d thrown away. Cal’s defense had shut down the Trojans in the fourth quarter, as USC did not record a first down in the period. But with 1:47 left, it was the Trojans’ defense that responded.

After a Rodgers incompletion, USC’s defense sniffed out a shovel pass and eventually sacked Rodgers as he scrambled. Another Rodgers incompletion left the Golden Bears facing 4th-and-goal from the 14, with the Coliseum crowd blaring. Rodgers couldn’t find wide receiver Geoff McArthur in the endzone on fourth down, and the Trojans defense held, moving USC to 5-0 and on the way to a perfect season.

Like the game against Cal, this one also came down to a final drive. Unlike the Cal game, this one had USC with the ball, and a different final result.

USC took a 14-12 lead into halftime thanks to an interception return by Tyrone Hudson off of Stanford quarterback Jim Plunkett.

With just three minutes remaining and backed up deep in his own territory, Plunkett hit receiver Randy Vataha on a jump ball for 67 yards, and a Cardinal field goal gave them a 24-23 lead, with Stanford players celebrating a certain victory after the kick.

And that looked to be the case, as USC faced a fourth-and-five at its own 20 yard line with no timeouts. A handoff to tailback Clarence Davis picked up the first down. USC quarterback Jimmy Jones completed three passes to take USC down to the Stanford 18-yard line. USC receiver Gerry Mullins was tackled in bounds on the final offensive play, so while the clock stopped for the first down, USC had to hustle out kicker Ron Ayala and the special teams unit.

The clock struck triple zeroes as the snap went back, and Ayala drilled the field goal to give USC the 26-24 win.

The win helped USC to an eventual Pac-10 title and a Rose Bowl win against Michigan.