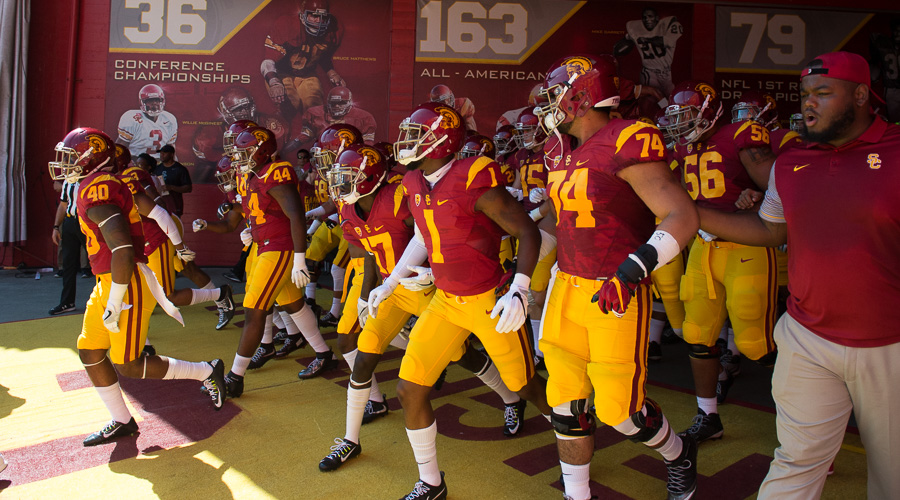 WeAreSC readers are selecting their finalists in USC’s greatest games against Notre Dame, UCLA and in the Rose Bowl. Now it’s time to unveil the finalists in the “other” quadrant.

These games come from the same season, though different calendar years, and–despite both being USC wins–are games with two wildly different paths to victory.

In 2004, Cal came to the Coliseum looking to knock USC off for the second year in a row, and later that year, Oklahoma was looking for another national championship, as the No. 2 Sooners squared off with the No. 1 Trojans.

There can’t be many college football games in history where offensive records were set and a combined zero points were scored in the fourth quarter. But that’s what happened when quarterback Aaron Rodgers and Cal came to the Coliseum in 2004.

Cal had upended USC in triple overtime the previous season, costing the Trojans a chance at an undisputed national championship, and Rodgers was having the game of his life for the No. 7 Golden Bears. He tied an NCAA record by completing his first 23 pass attempts of the game and got the ball back with 4:30 left at his own 35-yard line.

Cal marched down to the USC 9-yard line and Rodgers’ only incompletions to that point had been passes he’d thrown away. Cal’s defense had shut down the Trojans in the fourth quarter, as USC did not record a first down in the period. But with 1:47 left, it was the Trojans’ defense that responded.

After a Rodgers incompletion, USC’s defense sniffed out a shovel pass and eventually sacked Rodgers as he scrambled. Another Rodgers incompletion left the Golden Bears facing 4th-and-goal from the 14, with the Coliseum crowd blaring. Rodgers couldn’t find wide receiver Geoff McArthur in the endzone on fourth down, and the Trojans defense held, moving USC to 5-0 and on the way to a perfect season.

Oklahoma fans knew it would be a blowout. They couldn’t have been more right and more wrong at the same time.

In a BCS Championship Orange Bowl matchup, the No. 1 USC Trojans absolutely obliterated the No. 2 Oklahoma Sooners, 55-19.

Was this objectively a great, competitive game? Absolutely not. Does it belong on this list? Absolutely yes.

There are few 15-minute periods USC fans have enjoyed in the history of Trojan football more than the second quarter of this game, when the Trojans took a 14-7 lead and stretched it into a 38-10 halftime lead that was pure dominance.

USC safety Jason Leach picked off Oklahoma quarterback Jason White and the Trojans quickly capitalized with a 54-yard touchdown pass from Matt Leinart to Dwayne Jarrett. USC cornerback Eric Wright then picked off White and Leinart found Steve Smith for a five-yard score. Smith scored again as he hauled in a 33-yard touchdown pass while falling to the ground for the second of the Trojans’ highlight-reel touchdowns–tight end Dominique Byrd got the Trojans on the board with a spinning, one-handed touchdown grab in the first quarter.

The second half was a victory lap for the Trojans, as USC ran the lead to 55-10 before settling for a 55-19 win and a national championship.

USC racked up 525 total yards, forced five turnovers and helped Trojan fans to a 60-minute celebration in what certainly qualifies as a great game from a USC fan’s perspective.