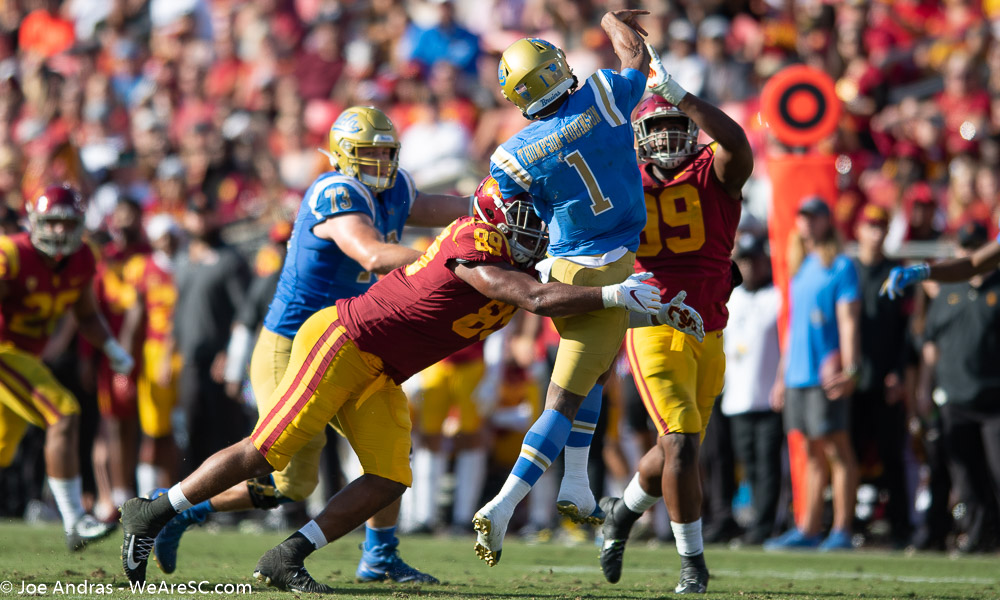 And then there were two. The USC Trojans and UCLA Bruins have produced some truly terrific games throughout their histories and this crosstown rivalry, but WeAreSC readers selected their top two and have set up this UCLA final.

The 1967 USC – UCLAmatchup sailed through the first round, beating the 1990 shootout with nearly 70% of the vote. The other quarterfinal was much closer, as 1988’s Rodney Peete “Measles Game” edged out 1987’s USC comeback completed by Erik Affholter’s juggling touchdown grab, with 54% of the vote.

In 1967, the USC – UCLA game had as much–and probably much more–at stake than any game in this long rivalry. The Trojans and Bruins spent the entire year toward or at the top of the national poll. Entering this game, UCLA was No. 1 and USC was No. 2 in the coaches poll (No. 4 in the AP poll), the winner would claim the AAWU and national championships and the Rose Bowl berth, and UCLA (Gary Beban) and USC (O.J. Simpson) had players that would finish Nos. 1 and 2 in the Heisman Trophy voting.

And then the game lived up to the hype, regularly featuring on every “Game of the Century” list.

UCLA jumped out to a 7-0 lead but USC tied it at 7 on an interception return touchdown by Pat Chashman, who read a throwback to the tailback, jumped in front and took it more than 50 yards for the score. A 52-yard end-around run by Earl McCullouch eventually set up an O.J. Simpson touchdown run, where he broke at least four tackles and gave USC a 14-7 lead at halftime.

Beban hit wide receiver George Farmer for a deep touchdown in the third quarter to tie the game at 14.

In the fourth quarter, the Bruins took advantage of an interception as Beban threw for a touchdown pass to give UCLA a 20-14 lead with 11:40 left in the game. But the ensuing extra point was tipped and sent wide by USC’s 6-foot-8 Bill Hayhoe, who had already blocked two previous field goal attempts in the game.

Then, with 10:38 left in the game, USC quarterback Toby Page called “23 blast,” on third-and-seven, and Simpson went 64 yards on one of college football’s greatest and most important runs.

The USC defense swarmed Beban for the rest of the game, resulting in several sacks. UCLA never threatened again. Fittingly, the game ended on another USC sack, and the Trojans came away with the 21-20 win.

Though that 1967 USC team was coming off a 3-0 loss at Oregon State heading into the UCLA matchup, the win over the Bruins combined with a win over Indiana in the Rose Bowl earned the Trojans a national championship.

The 1988 version of the Crosstown Showdown comes with its own moniker as well: “The Measles Game.”

USC quarterback Rodney Peete spent two nights in the hospital with measles during the week leading up to the game, and it was unknown whether he would be able to play. But play he did, completing 16 of 28 passes for 189 yards and a touchdown, and added another touchdown on the ground.

UCLA, led by quarterback Troy Aikman, cut USC’s lead to 21-16 at one point, but an Aaron Emanuel touchdown run pushed the Trojans ahead 28-16 and they’d go on to win 31-22. With the win, USC captured the Pac-12 title and a Rose Bowl berth.