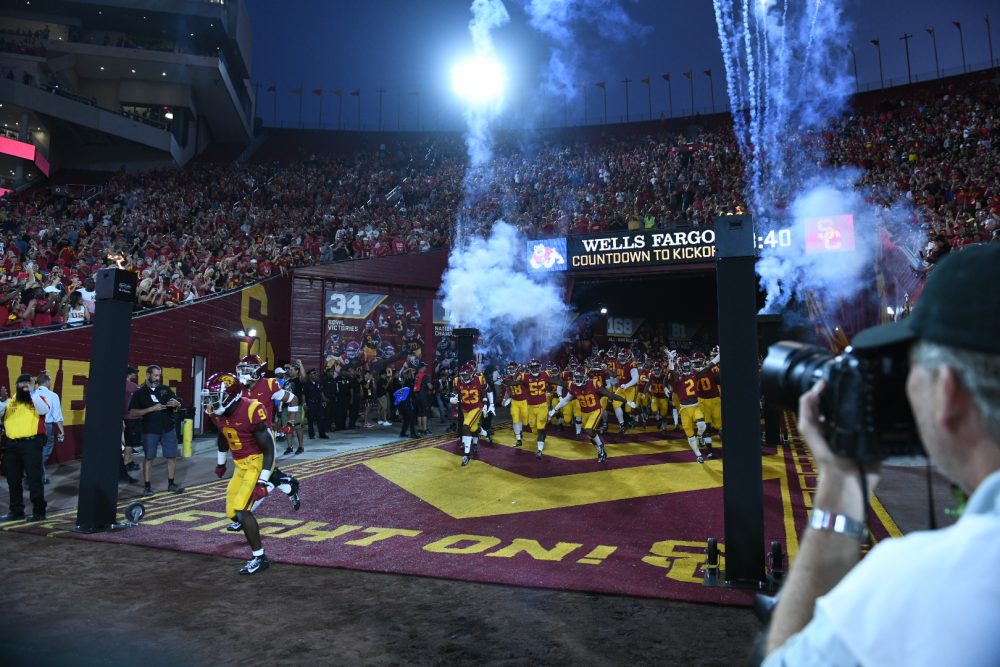 Between coaching moves, players entering the transfer portal and announced early entrants into the NFL Draft–with still more to come–the Pac-12 will look decidedly different in 2019 than it did in 2018. As USC is still in search of a defensive coordinator, we run through some of the biggest changes for each program that have taken place so far.

USC head coach Clay Helton remains, but he’ll be without defensive coordinator Clancy Pendergast and special teams coordinator John Baxter in 2020. The Trojans also lost outside linebackers coach Joe DeForest to North Carolina State and defensive graduate assistant Chris Hawkins to Arizona State. So far, USC’s big offseason coaching move has been to keep offensive coordinator Graham Harrell and sign him to an extension, but that could become another situation to monitor if Washington State expresses interest in Harrell becoming the Cougars head coach.

Wide receiver Velus Jones entered the transfer portal and has since announced his transfer to Tennessee, where he will be reunited with former USC offensive coordinator Tee Martin. The Trojans will also likely be without offensive lineman Clayton Bradley, who was granted a sixth year of eligibility but has put his name into the transfer portal. Bradley missed all but three games in 2018 and all of 2019 while recovering from a back injury.

According to a report from FootballScoop.com, the Trojans will move John David Baker from an analyst role to inside receivers/tight ends coach. Baker is close with Graham Harrell, having worked with him at North Texas.

Arizona has made nearly wholesale changes with its defensive coaching staff after finishing last in the Pac-12 in defensive scoring. The Wildcats hired Paul Rhodes as their new defensive coordinator, bringing him over from UCLA, where he served as defensive backs coach.

Arizona added defensive line coach Stan Eggen, who came over from New Mexico, and linebackers coach Andy Buh, who has Pac-12 experience at Stanford (2007-09) and Cal (2013).

The biggest on-field change for Arizona will be at quarterback, as Khalil Tate is off to the NFL. USC fans got to see a little bit of Grant Gunnell, Tate’s replacement, last season as a true freshman, as he threw for 196 yards and two garbage-time touchdowns against the Trojans.

Oregon is going to get plenty of press as the program that has filled the void created by USC’s past two seasons (and rightly so), but Arizona State is going all out to make a statement in Los Angeles as well. The Sun Devils hired Hawkins away from USC, and he’ll take over as the defensive backs coach in Tempe. Arizona State also brought in wide receivers coach Prentice Gill, a former USC assistant known as an excellent recruiter. Hawkins, Gill and associate head coach Antonio Pierce are going to put a ton of time into recruiting Los Angeles, Southern California, and California in general. No program signed more of the top-40 California prospect in the 2020 class than Arizona State, which grabbed seven (compared to three, so far, for USC).

Arizona State will also have a new coordinators on both sides in 2020, as former defensive coordinator Danny Gonzalez accepted the head coaching position at New Mexico (a USC opponent in 2020) and former offensive coordinator Rob Likens was dismissed. ASU cornerbacks coach Tony White was promoted to coordinator on that side of the ball, while Zak Hill will take over the offense after spending four years at Boise State. Arizona State also promoted Derek Hagan to a full-time position, as he’ll work with wide receivers and tight ends.

Arizona State will bring back talented quarterback Jayden Daniels, who missed the USC game due to injury but was one of the better Pac-12 quarterbacks while healthy. But the Sun Devils will lose some depth behind him, as Joey Yellen (who played against USC) has announced his transfer to Pitt, and Dillon Sterling-Cole is in the transfer portal as well.

Colorado looks to be putting it together somewhat on the recruiting trail, as the Buffaloes signed a few potential instant-impact guy for next season, starting with defensive end/outside linebacker Jason Harris. But the real player to watch could be Antonio Alfano, a former five-star defensive end who announced his transfer from Alabama to Colorado and is currently waiting to hear if he will be able to play immediately.

It will be a new face at quarterback for the Buffs in 2020, as Steven Montez’ eligibility is finished. USC saw backup Blake Stenstrom very briefly in the Trojans’ 2019 win in Boulder. Tyler Lytle could get the nod, or incoming quarterback Brendon Lewis could become another true freshman starter for Colorado.

Oregon will have a new offensive coordinator in 2020 after Marcus Arroyo took over as the head coach at UNLV, but there is no official word yet on who it will be. The reported frontrunners are former Mississippi State head coach Joe Moorhead and LSU offensive analyst Jorge Munoz. Los Angeles Rams assistant Jedd Fisch and Tulane offensive coordinator Will Hall are also reportedly in the mix. As with USC, this will be the second coordinator change in two seasons at Oregon, as the Ducks hit a homerun by bringing in defensive coordinator Andy Avalos for the 2019 season.

There could be a couple familiar faces when the Ducks take on USC next fall, as former USC wide receiver Devon Williams transferred to Oregon early last fall. Oregon also signed USC linebacker target Justin Flowe in the 2020 class, as Flowe will almost certainly see the field as a true freshman.

Oregon will have a new quarterback in 2020, as Justin Herbert is off to the NFL. The Ducks are in the market for a grad transfer there, but also will bring in a couple of four-star quarterbacks in the 2020 class–Robbie Ashford and Jay Butterfield–to compete with Cale Millen and Tyler Shough.

The Beavers like what they have in head coach Jonathan Smith and rewarded him with a three-year extension that runs through the 2025 season.

Stanford has received two massive pieces of positive news for the 2020 season, as left tackle Walker Little and cornerback Paulson Adebo have announced they will return to school rather than enter the 2020 NFL Draft. Those aren’t just the two best players at their respective positions on the Stanford roster; they likely represent the two best in the conference.

As for the bad news, Stanford might want to look into some sort of sponsorship rights regarding the NCAA transfer portal, because they’ve owned it this offseason. Fifteen Cardinal players have entered the portal and just one has announced a return to campus (tight end Scooter Harrington). At this point, the Cardinal could lose quarterback K.J. Costello, running back Trevor Speights, offensive linemen Devery Hamilton and Henry Hattis, and defensive linemen Michael Williams and Jovan Swann.

Costello would be a significant loss, though Stanford got some experience playing without him in 2019, as he played in just five games due to injury. The linemen would also impact Stanford next season, as those are potential starters heading elsewhere.

UCLA has also been hit hard by the transfer portal, again, as wide receiver Theo Howard has already announced his transfer to Oklahoma and starting offensive lineman Chris Murray intends to leave Westwood as well. Those are two of 10 Bruins in the portal this year, after 18 explored transfer options last year.

Head coach Chip Kelly said he didn’t anticipate making any coaching moves despite UCLA’s struggles in 2019, but he still needs to fill his defensive backs coaching position, after Paul Rhodes was hired by Arizona as the Wildcats’ defensive coordinator.

Utah will have a new quarterback in 2020, as Tyler Huntley moves on. It’ll likely be a battle of transfers, as former Texas quarterback Cameron Rising arrived at Utah last season and former South Carolina quarterback Jake Bentley will arrive this year as a graduate transfer. The Utes will also have a new primary running back, as Zack Moss is off the NFL. The Trojans didn’t have to face Moss for a full game in 2019, as he suffered an injury during the USC win.

Utah’s defensive backfield will look almost entirely different than the one Matt Fink shredded in 2019. Defensive backs Javelin Guidry and Jaylon Johnson declared early for the 2020 NFL Draft. Combined with the seniors Utah was already scheduled to lose, the Utes have no experienced players returning at that level of the defense for 2020.

The first head coaching change of the Pac-12 offseason was a massive surprise, as Chris Petersen announced he was stepping down. Washington moved quickly to promote former defensive coordinator Jimmy Lake and the Huskies should be able to make a seamless transition into 2020.

Washington will have a slightly different look offensively, however, as offensive coordinator Bush Hamdan was replaced by Jacksonville Jaguars offensive assistant John Donovan. He has some NFL experience and also coached for James Franklin at Vanderbilt and Penn State, but this was a hire that was met by plenty of confusion and frustration from Washington fans.

The Huskies will also have a new quarterback next season, as Jacob Eason’s stay in Seattle lasted just one season. Jacob Sirmon, Dylan Morris and true freshman Ethan Garbers are candidates at this point, but a graduate transfer at the position probably can’t be ruled out.

Washington will also need to find a couple of replacements at running back and tight end, as tailback Salvon Ahmed and tight end Hunter Bryant have declared early for the NFL Draft. Ahmed and Bryant combined for 202 of Washington’s 373 total yards in the win over USC in 2019.

At this point, the Cougars are without a head coach, though former Washington State assistants Alex Grinch (current Oklahoma defensive coordinator) and Graham Harrell have been mentioned as potential candidates, along with Boise State head coach Bryan Harsin, North Texas head coach Seth Littrell, and others.

The Cougars will need to replace quarterback Anthony Gordon and a few possibilities still exist there, as a new coach could certainly bring in a graduate transfer.