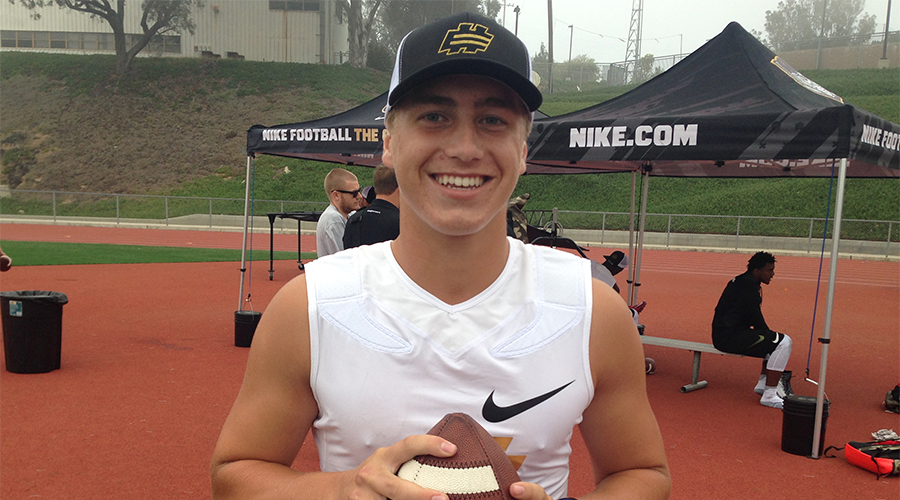 With the Trojans’ recruiting situation at quarterback for the Class of 2017 very much up in the air, one signal-caller to keep a close eye on in the coming weeks is Newport Beach (Calif.) Corona Del Mar’s Chase Garbers, a player whom the USC coaching staff has been in frequent contact with as of late.

Taking part in the Elite 11 Finals this past weekend in Redondo Beach (Calif.), the 6-foot-3 passer showcased a strong arm and solid accuracy on his throws. And while, in the end, Garbers didn’t finish high enough in the final rankings to earn an invitation to The Opening Finals, he certainly showed enough to provide reason to believe that he has a very bright future ahead of him.

Not surprisingly, Garbers’ stock has steadily risen throughout the recruiting process. With Ole Miss serving as the most recent of the close to 20 offers that he currently holds, he’s begun to compile a list of leaders, and USC is in the mix.

“I’ve kind of started to focusing more on a couple schools,” said Garbers, who completed 68.7 percent of his passes as a junior for 2,715 yards and 33 touchdowns with just three interceptions. “Washington, Cal and Vanderbilt, and then I’m also talking to USC and Texas A&M a lot.”

Out of that group, all but USC and Texas A&M have extended an offer, and it’s Washington and Cal that figure to have the inside track in the race for his signature at this point – with both programs set to host the talented signal-caller for unofficial visits in the next month.

Up first is Washington this weekend.

“With Washington, I really like Coach Smith [Offensive Coordinator Jonathan Smith], and I like the tradition up there with Coach Petersen [Head Coach Chris Petersen],” Garbers said. “They have a great recruiting class already, I have family in Seattle and then I like what they do with the offense.”

Later this month, on the weekend of June 25th, Garbers will head up to Berkeley to spend some time at Cal.

“Coach Spav [Offensive Coordinator Jake Spavital], he’s a great guy and I really like what he does,” Garbers said. “He’s the youngest offensive coordinator in college football, which is a plus. Plus, Cal is in the state of California, and you can’t go wrong with that.”

In addition to the two trips up north, Garbers will be checking out one more school much closer to home – USC on June 18th, where he’ll participate in the Skills Camp.

With Tua Tagovailoa, having recently given a verbal pledge to Alabama, and his apparent replacement atop the Trojans coaching staff’s wish list, Jack Sears, still undecided and set to announce his decision in July, Garbers has emerged as the potential next candidate in line.

In fact, there’s reason to believe that if Garbers performs well at the camp at USC in a couple of weeks, an offer could follow shortly afterwards.

“Coach Helton [USC head coach Clay Helton] wants me to go up there to camp, just so I can throw in front of him for an hour or so,” Garbers said. “That’s where things stand right now. Hopefully after the camp they offer.”

If an offer from the Trojans ultimately does come to fruition, Garbers isn’t hiding the fact that it could have a significant impact on his recruitment.

“They’d definitely probably be in the top list,” Garbers said. “My family on my mom’s side are all USC fans. I actually had a cousin, Joey Augello, who played at USC and graduated this year. And I have really good friends who go to USC, so USC and Newport Beach kind of intertwine. So yeah, the hometown school, it would be nice to have that offer.”

Another factor that could ultimately help USC out is the relationship that Garbers has developed with both Clay Helton, as well as Trojans quarterbacks coach Tyson Helton.

“Clay Helton compared me to Matt Barkley, which he said was good because he kept him his job, so that’s always good to hear,” Garbers said. “I’m in contact mostly with Tyson Helton. We text probably every other day, and he’s come out to see me twice. He’s a really cool guy and I like what those guys do.”

Without an offer in-hand from USC right now, however, Garbers can’t seriously factor the Trojans into the equation just yet. And with the two trips up north also coming up, not to mention potential visits to Vanderbilt and Ole Miss also a possibility, his recruitment will certainly be an interesting one to follow – but as he points out, not for too much longer.

“I could be making my decision in June, going into July,” Garbers said. “Sometime in that range.”