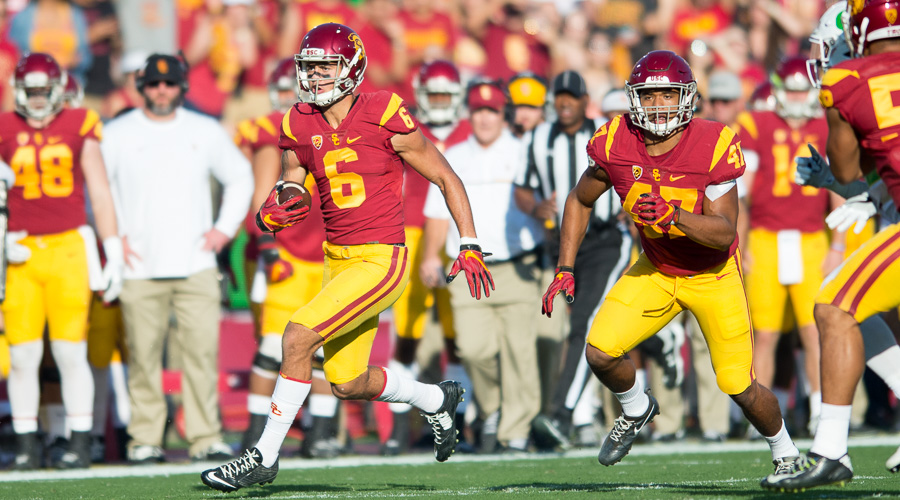 The freshman wide receiver just couldn’t bring himself to call it a day, staying a good 30 minutes after the conclusion of the session to get extra work in. Even after the lights were turned off, he could still be spotted on the southwest corner of the field, working on his route running and release moves.

“Today I didn’t have the best day,” said Pittman afterwards. “I kind of had to work it out until I felt like I could leave.”

That determined mindset has most certainly served Pittman well in his initial season on campus at USC.

Having made steady strides right from the moment he stepped on the field this past spring after arriving as a heralded mid-year enrollee, he’s stood out on a consistent basis in practice in recent weeks, and he’s seen his minutes on offense increase as a result.

That was the particularly the case last weekend in USC”s 45-20 victory over Oregon, when he found himself serving a significant role for the first time, compiling four receptions for 61 yards – after making a total of just two catches in the seven games prior.

“Mike made the most of his opportunity, and we’ve seen it coming,” said USC head coach Clay Helton. “You know, all of a sudden the light comes on for a freshman, and it has over the past couple of weeks.”

Pittman’s emergence is certainly good news for a USC offense that has blossomed under the direction of quarterback Sam Darnold. With a combination of 6-foot-4, 215-pound size, outstanding athleticism and deceptive speed, Pittman has the potential to add a unique dynamic. An absolute star on the high school level at Westlake Village (Calif.) Oaks Christian, he racked up 81 catches for 1,990 yards and 24 touchdowns in his senior season alone.

With the Trojans possessing a wealth of veteran talent at the wide receiver position, however, Pittman wasn’t able to jump right into the mix as early as he had hoped, but he never lost perspective on the situation, keeping a positive outlook throughout.

“It’s hard when you’re taking reps with the No. 2 group,” Pittman said. “Sometimes it just gets in your brain that you’re a two, but you just have to fight it off because we have great guys like JuJu [Smith-Schuster] and Darreus [Rogers]. Those guys are obviously going to get drafted, so you can’t take it too hard because those are two really good guys.”

And so, Pittman decided to do his best to make his presence felt in practice on a daily basis, and in any every way possible. That includes on special teams, where he first made an impact for the Trojans this season.

“That’s where I really got my feel for the college game and the speed,” Pittman said. “So, that’s just helped me in my development.”

It was on special teams where Pittman came up with one of the highlight plays of the day in USC’s victory over Oregon. With the Ducks punting, Adoree’ Jackson was able to draw the Oregon coverage team by pretending to get ready to return the ball, while it was actually headed toward the opposite side of the ball to Pittman – who began the play closer to the line of scrimmage. He got back in time to catch the punt before breaking down the sideline for a 28-yard gain.

“We practiced that all week,” said Pittman, who also blocked a punt against Utah State earlier this season. “The punter actually put it in a pretty good spot. We track down where the punters kick it, and that was his only punt of the season on that hash. It was set up to score, but I think we got like 20 yards out of it. My teammates were bashing me because I didn’t score, but it was a fun play to run. “

Another area where Pittman has been catching the attention of the Trojans coaches is with his run blocking. Not a facet of the game that most freshmen receivers find success in early in their careers, Pittman arrived at USC with an already developed appreciation of the craft, due in large part to his father, Michael Pittman Sr., who spent 11 seasons playing in the NFL.

“My dad was a running back, and he was always telling me how good blocking receivers really helped his game,” Pittman said. “That just kind of clicked. If I can block, then I can get on the field more.”

Having put in the work, and proven himself in every other way, it’s not surprising that Pittman finally received the opportunity to show off his pass-catching skills against Oregon. And with the way that he performed in that contest, there’s reason to believe that more passes could be headed his way in the near future.

“I appreciate him making the most of his opportunity when he gets it,” Helton said. “He’s a guy, we know now you can put in there and he’s going to be able to get the job done, and it should lead to some bigger and better things for him.”