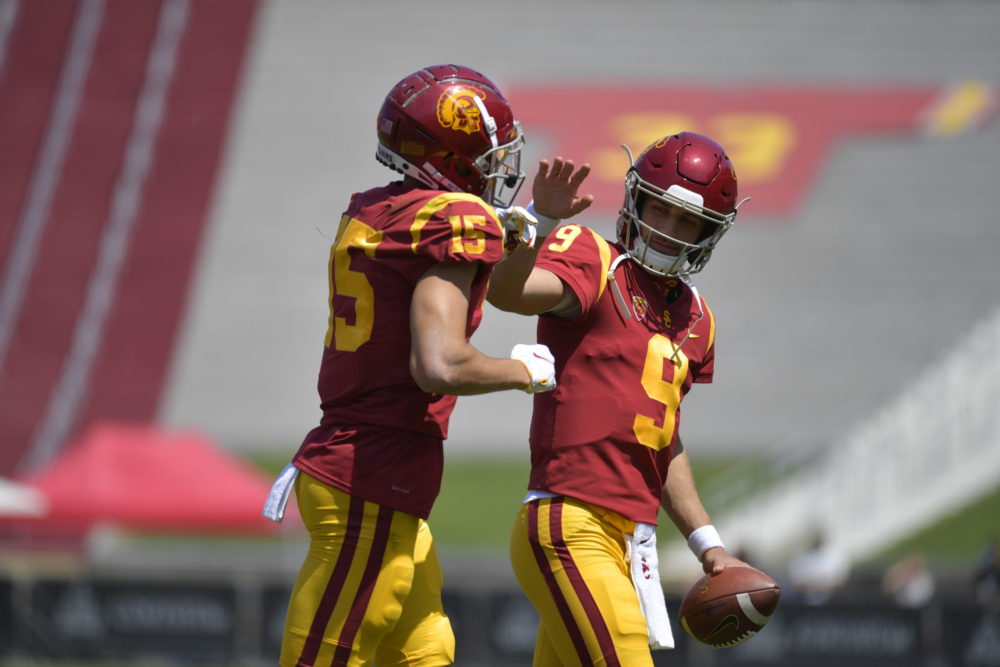 The selections that come as no surprise dot the first team, where USC landed six players. The group is led by quarterback Kedon Slovis and also includes wide receiver Drake London, linebacker Drake Jackson and cornerback Chris Steele. Those four have consistently been mentioned when it comes to preseason accolades in the conference and it wouldn’t be surprising to see multiple team captains out of that group.

Joining them on that first group were punter Ben Griffiths and long snapper Damon Johnson.

The second team featured four Trojans, in offensive lineman Andrew Vorhees, defensive lineman Tuli Tuipulotu, safety Isaiah Pola-Mao and kicker Parker Lewis. Plenty is expected from Vorhees as one of the leaders of the offensive line this season and his performance at left guard, or wherever he winds up along the line, will be critical as far as USC’s offensive production is concerned.

A major jump is expected from Tuipulotu, which might seen unfair given how well he played last season as a true freshman. But expectations are there for him to become a leader along the defensive line as a true sophomore. He turned in a terrific spring ball performance.

Pola-Mao will be an interesting fit in the backfield. He’s a returning team captain, so extensive playing time is expected. He began the spring at the safety spot he’s occupied the last few seasons, but was moved to nickel when Max Williams went down for the season early in camp. He responded really well there, but with Greg Johnson returning to health and hoping to grab that spot back where he played, last season, the USC defensive coaches could have an interesting decision as to where Pola-Mao fits best with a growing number of options back there, including transfer safeties Xavion Alford and Chris Thompson Jr.

It’s evident that plenty is expected of USC’s special teams this season, given the three specialists are either first or second-teamers here. Confidence is high in those guys and the Trojans responded very well in the first year under coordinator Sean Snyder. A step forward there is expected as USC hopes to field the best special teams units in the conference.

USC’s third-teamers are running back Keaontay Ingram and kick returner Gary Bryant Jr. Ingram’s performance this season will hinge on just how many times his number is called and the blocking he gets up front from the USC offensive line. He has the talent to make his selection to the third team look like a slap in the face. But USC’s running game the past two seasons makes a third-team selection look like immense praise for a Trojan tailback. It’s clear that Ingram as the lead back and most potent out of the group is growing into a consensus opinion.

The fourth team is where the interesting selection occurs, in offensive lineman Jonah Monheim. He played in just one game last season, when the Trojans were down multiple bodies along the offensive line against Washington State. He also didn’t start spring ball with the starters, though he did get some time with the first team in the weeks following the spring game. He saw a bulk of his time at right tackle, where Jalen McKenzie returns, though Monheim was praised by the offensive coaches as someone who could play all five positions along the line. It’ll be very interesting to watch how Monheim fits into the line this fall. Both head coach Clay Helton and offensive coordinator Graham Harrell have praised the second-year lineman for what he’s done so far and Helton said he had one of the best spring of any player at any position. It’s likely a returning starter will have a real battle to keep Monheim off the field this fall.