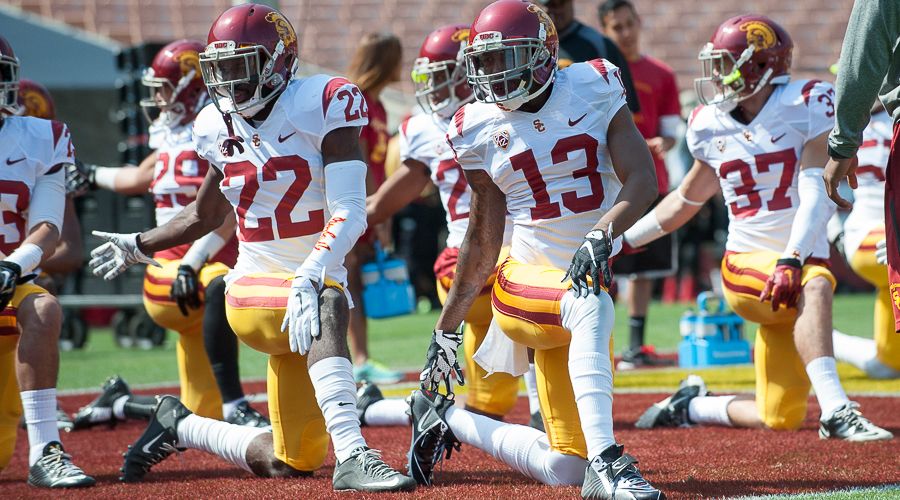 After a little trouble getting in to the parking area yesterday (a good sign) it was lovely being back home in the Coliseum. Some of my favorite people were there waiting at the press entrance and again at the press box entrances on the ground floor and up on the broadcast level. Hugs all around.

A really BIG CROWD, maybe the best I’ve ever seen for a spring game, I guesstimated 25,000 and turned out I was not far off. The interest is sky high for this team, and the Trojans, at least according to the fans, are on the way back!

The band is wearing gray t-shirts, and has only maybe half of their contingent, but still sound better than 80% of the bands in the country in mid-season, while playing at the spring game.

Speaking of which, I was a little sad the band) or some of them) were not on stage Friday for the playing of Tusk at the Fleetwood Mac concert at the Fabulous Forum. They used the original footage from the recording session at Dodger Stadium back in the day, giving us a look at those retro band uniforms. The Ucla chant was so loud you could hear it throughout the building.

A look down on the field shows a ton of Trojan Football alums—Boselli, Peete, Cowlings, Leonard Williams, Sam Cunningham. By now you know the list.

Jordan Moore and JJ are doing the live broadcast of the spring game on The Beast 980 on which they have broadcast their show all year long with great success. I get to go on with them at the close of the show, right after JK McKay. The Three Amigos/Stooges/Musketeers back together again for another season. Love my boys!

The weather is just great.

A super grab by Ju Ju at the goal line, but it takes us three downs to get in from the 2 and later from the 5, so we’d better figure that out. Or our defense is really god down deep. Your call.

By the way, my eldest daughter, who is expecting grandchild #2 on July 4th, got a new dog and her 8 year-old daughter named it Ju Ju….she watches every game and listens to me on the radio from their home in Cincy.

Kessler appears to be under pressure in the pocket, and that’s good news in that our front 7 is doing well.

I have to go do the interview now and have to stop writing (that’s what it says on my note pad), By the time that’s over, the spring game is over for another year. Only 147 days to go.

Cap the night of with a baseball win over the westwooders. Big one on Sunday.