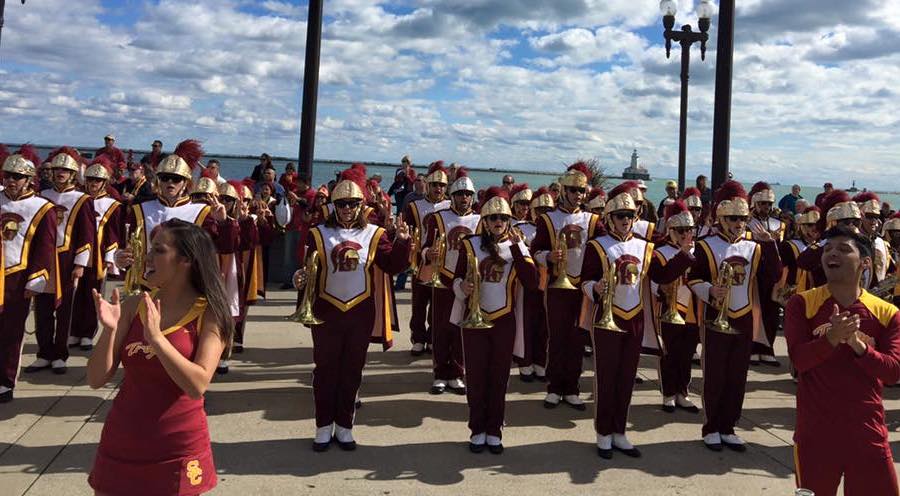 My trip to Notre Dame, other than the game result, was really quite nice. But since the result is all that matters, this week I find myself sulking and having trouble getting going. I believe that might be depression creeping in. I hope the team feels otherwise.

Originally, we were going to leave on Friday, but smarter heads prevailed and allowed us to get out of here Thursday afternoon. That meant we got to bed around 3 am on Friday morning. I watched two movies on the quiet flight out—Entourage and San Andreas. Both were equally cinematically inclined.

I used to watch the HBO TV version of Entourage, so it was just a larger and longer episode. Nothing much to it unless you were a big fan of the TV show.

The Rock carried the other one of course. He seems to know he’s “campy” and plays it really well. Good special effects, and Frisco gets wrecked, including the Juan Marichal statue getting toppled like Saddam Hussein.

Truth be told, I didn’t get to see the end of the movie as our flight landed with a large thump —really hard landing. A portent of things to come as it turned out.

Friday, I woke up early had breakfast with some of the football staff guys, and caught the bus to Chicago for the pep rally.   My wife Jenny made the trip on her own dime for the first time ever (and brought along step son Leo). They met me at the end of the Navy Pier, which is very, very long and of course the concert from the band was at the end of the pier.

Well attended as always. We find out that Notre Dame has banned USC from appearing in the pre-game show, and as always do not provide seats, even on the field, for our huge band contingent, so they have to stand the entire game. Unlike most of the people who greet us all game long, the leadership there doesn’t get it that fans should come first and they’d love to see BOTH bands perform.

Speaking of which, there’s a post-game band concert often by both school’s bands. Would it not make sense to come to an agreement where one school could play a song without the other playing, and then wait as the other school plays a song, back and forth and so on? When they both play at the same time, no one can enjoy either song, and everyone booed. I don’t blame them either. Let’s find some common sense, eh?

We stayed in Chicago and visited Wrigleyville to take in some of the atmosphere prior to the start of the NLCS. Go Cubs! Apparently however, they did not get the message, as the Mets, who KO’d the Dodgers going the distance, are blowing the Cubbies out as of this writing, and figure to meet KC in the Series.

Dinner and to bed after driving through our town of residence on this trip, Michigan City, Indiana.

The following morning, we got going nice and early, taking the back route to the stadium, one that took about 45 minutes.

Once on campus, we all took met up with my ex-wife and her new beau, resplendent in his Ohio State garb (no accounting for taste), and my daughter Stephanie and her husband-to-be Tony up from Cincy. I hadn’t seen her in quite a good amount of time, so it was great to have face time.

We visited the Dome, the Grotto, the church. Listened to the bagpipe concert. Then the ND men’s glee club, then the football team walk and the band concert (I missed that, had to go to work before they came out). It’s a great college football day and tradition, and if you’ve never been, make it a bucket list thing on your list!

The game? Ah, yes. Well we look, er, inconsistent. Great at time, awful at others.

This is a really good team, and still, believe it or not have a chance to win the conference if they can—starting this week—put it altogether and keep it altogether on both sides. But the line play is the key, and I have not seen anything yet to say that this will happen. Can it? Yes. Will it? Dunno.

Notre Dame is really good also. They and Stanford may play a final four showdown in Palo Alto in late November. That game might wipe Stanford out leading into the Pac-12 final the following week. Keep that in your pocket.

There’s still plenty to play for, and the team appears to me to have the capability to turn the corner and make it quite the season IF they get a win this week at home vs #3 Utah this Saturday. But if not, it could become a real grind.

I like to think this team is ready to roll in the right direction for the rest of this season. Cockeyed optimism. Call it a weakness.

On the trip back, I finished San Andreas, then watched Ant Man, which was really fun. Then I tried Birdman. I fell asleep.