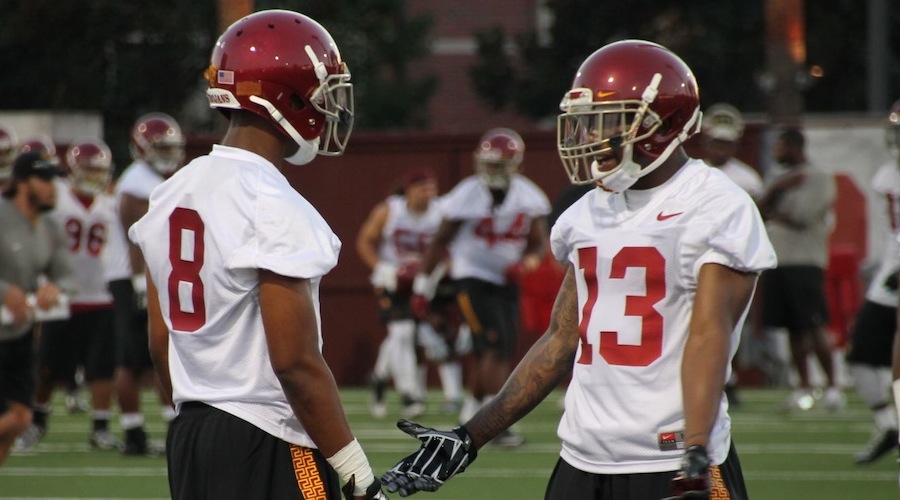 There is a certain air of excitement that follows you around on the day of the first summer practice. Just hanging around waiting for it to happen, or on the drive in.

Instead of driving in on Vermont, the gate is closed because it’s a Saturday, so we drive in on McClintock. I seldom walk over this way any more, no real reason to come over.

First thing I notice is University Village is gone, of course, but a new development is taking shape and looks to be abut 50% completed.

The old McClintock building in which I used to run KSCR the campus radio station has been totally re-done. Maybe it’s just a facelift, but honestly, when I was in there (constantly) in the mid-to late 70’s it was just a step away from needing demolition. Nice to see at least the outside is looking better.

The media has been given a new and even smaller area in which to conduct professional business of promoting the USC football program. We are now on a part of Howard Jones field looking directly into the sun, from the 10-yard line into the end of the end zone, a space of 20 yards. Oh the teeth gnashing. I surmise the media viewing, which seems to be getting filled with smaller and smaller pieces and portions, may be heading the way of the Dodo Bird.

I can tell you this, and I don’t speak for the others: it makes it harder to do one’s job well.

It’s always great to see old friends we really haven’t seen in person in many cases since the end of Spring ball.

We all have a curious eye on the new guys, even if they are only in helmets and jerseys and shorts. You kind of get a sense of how big the guys are in reality, and how fast they are, what their bodies actually look like.

First guy that stands out to me is Biggie, who is really good sized for a freshman.

JuJu has added Schuster to his last name. Honors his step dad. But try saying the following quickly: “over the middle to Smith-Schuster”. Maybe he just becomes a first name guy like “Reggie”.

There are about 12 guys trying out for the punt return and kickoff return jobs. 90% will never see the field as such.

Will Wood kickoff and Boormeester kick FG’s and PAT’s? The former is right footed, the latter a lefty.

The fields have a fresh coat of paint on the fences, with murals surrounding the field of USC football historical exploits. Brian Kennedy Field now sports a beautiful artificial turf.

Claude Pelon is bigger. Banner looks as good as I’ve ever seen him.

The team will helmets again Sunday, then add shoulder pads for the next two, finally going with full pads on Wednesday this week.

There is a crispness and sharpness that comes with experience and a level of comfort between coaches and players, players and the system and plays.

I love seeing Jalen Greene play in the slot. Any time we can throw to him in open space, good things will happen. He should be the number once choice to handle all Wildcat plays.

Tight Ends? You and me.

I see Ronald Jones break off a run during a scrimmage and put on a move that reminds me of you-know-who. It is abnormal (paranormal?).

Max Browne is one of the top backup quarterbacks in the country.

I spend time introducing myself to as many incoming guys as I can. They all seem very nice, but Biggie Marshall stands out, with a bubbling personality and friendliness about him that can’t be taught.

I am told he is equally intense and tough on the field, and smarter than any when it comes to knowledge of the game and his position.

Practice, if you count players arriving early for the 6:30 pm start along with those guys handing out afterwards for extra work, runs 3 hours and 35 minutes.

And that’s what I saw on my first day of summer practice.