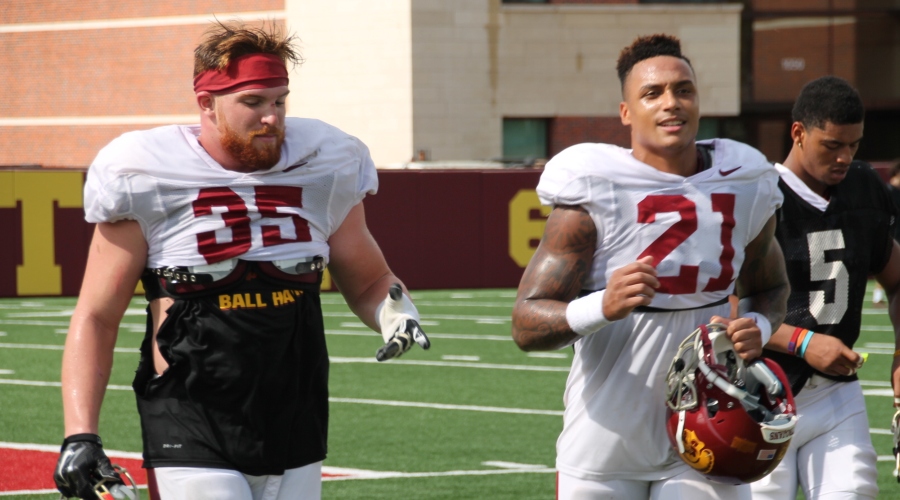 After the first two games, which seemed very much like NFL pre-season games, I am (just like you, no doubt) tremendously fired up and interested to see where we stand when playing a better know and usually tough, proven opponent.

Stanford has everyone’s attention, and I got that feeling from Sark during our pre game radio interview, always taken care of on Thursday, post-practice. There seemed to me to be a general tension and anxiousness…..focused and workmanlike towards the “real” schedule that starts this weekend.

Stanford has been very god in recent years—two Rose Bowls, a tough offensive line and rugged defense. They may be a bit down, but Hogan is a proven winner, and they have offensive weapons. Their defense is very stingy.

Cody has been criticized for having much less success against better opponents in big games. It is generally a criticism that has not been un-earned, and he knows it.

This is a real chance to silence those critics on that point and I an imagining he will have another big game. I also dreampt he will get picked off for the first time this season….but don’t blame me if it comes true.

I said before the season and I’ll say it again: I don’t think this one is all that close. Not an Idaho rout, but a “scoreboard easy” win for SC over the Farm.

I’m eager to see Lamar Dawson back in there. He and Cam Smith give us a nice depth at MLB. He has had a most frustrating career, but still has a chance to do big things.

It appears that Kevon Seymour may miss this one, meaning Biggie Marshall gets his first career start. Keep an eye on that, too, on Saturday night. It ought to be a nice night weather-wise.

Maybe not so much for ASU—100 during the day and 75 at night leaves us with a dry 85 at kickoff time, if not worse next week. But it’s a dry heat.

Do you like Ga. Tech at South Bend this Saturday? I sorts of do. But not BYU at the rented Rose Bowl Stadium.

I avoided being rained on Tuesday at practice because, frankly, I can’t find my umbrella.

I love that Jake Olson got cleared to practice, and look forward to seeing him play in a game, and then to interviewing him post-game.

I saw him walking away from the McKay center after practice with a friend and his dog, a white Lab.

The Dodgers, despite their bullpen, look more alive than earlier. Thanks Clayton.

The Angels are playing like they are dead, even though they aren’t.

How ‘bout those L.A. Rams. Even if it was against Pete. Happy birthday to our former head man.

Our women’s volleyball team has a 29 set winning streak heading into a tournament tonight at Oklahoma. The school record is 38. Could beat that if all goes well, next Wednesday at Pauley. SC is ranked third.

That’s one spot behind SC men’s water polo, who, with a win at the Norcals at Stanford this weekend, would be #1 again.