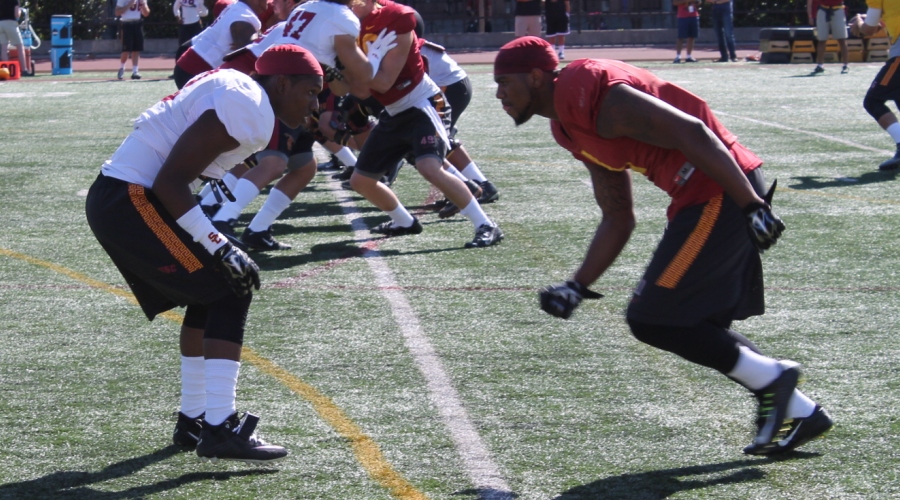 One more spring practice to go!

Saturday is always a fun day—a chance for everyone to get together and check out the Trojan football team that will be in 2015, sans the newcomers. The Coliseum hasn’t been used a whole lot since the end of the season, although there have been a few events, not the least of which was a soccer match (a “friendly”) between Mexico and Ecuador that drew 90-000.

Let’s see what improvements might have been made since we stepped inside last time to see the boys rout the Domers last November.

After watching this last on-campus practice today, I am still left with the feeling that this will be a team with a better record and is in fact a better squad than the one we had last year. I say that in part due to the talent still here, the talent to set to come in, but mostly an intangible—I just “feel” something different. They seem to be operating at a higher level, with less fake enthusiasm and more real hard work.

This seems like a team of football “gym rats”. Together they just seem to love the game.

Steven Mitchell has really broken out. Delvon Simmons, too. Plenty of others. Very few have taken any kind of step back, other than Bryce Dixon…and we’ll all know together one of these days what happened and what is going to happen with him.

It appeared that maybe the Trojan football alumni club might be having a meeting after practice today…..I say that as a lot of old familiar faces were at practice, and it sure was great to see Gentleman Jim Hardy back on the field, where he hardly ever used to miss a practice before they shut the gates.

It hardly seems possible that enough time would have gone by that Troy Polamalu would be able to retire, but retire he has. Two Super Bowls, lots of All-Pro years, and didn’t he make us all proud with the way he handled himself on and off the field.

He was one of the most likeable and approachable guys at SC when he was here. Always had time to stop and chat with everyone.

Speaking of Halls of Fame, Jenny and I have been invited to attend this May’s USC Athletic Hall of Fame event in the McKay Center. We get to sit with my stats guy and best buddy Mark Hoppe and his wife, plus no less than Jon Arnett and Ron Yary and their wives.

I understand that somehow, no media member was included in the voting this time. That’s a shame because there are plenty of deserving people in that category to keep inducting at least one for the next 50 years.

What a great sports weekend is upon us: The Masters, baseball, hockey (there will be a new cup champ this year), hoops coming down the stretch, and on campus, top ranked women’s tennis and SC vs Ucla baseball among other things to keep you occupied.

I went to Dodger opening day. Sat in the left field bleachers where I spent most of my youth. They’ve got a new PA guy who pretty much just gives us the information we need. Not a cheerleader, thankfully.

The sound system is turned up so loud and is used so frequently you can barely hold a conversation with the people with whom you came to the game. And the incessant screeching into the microphone by hosts in the stands and on the field seems to never end—or have much of a point.

No one seems to trust their fans to actually know when to cheer any more.

Yes, I know, I know—I’m getting old. But it’s just not a pleasant experience. I’d watch on TV but……

Well, they’re still our boys in blue, come what may.

Very sad to hear about the passing of Trojan Basketballer Doug Widfeldt.  Only 57 years old, he helped SC to the ’79 NCAA tournament.  He was on some teams that played when I was sports director at the campus radio station KSCR.  I always like talking with him, and more than once we shot free throws after practice together.  Gone too soon.

Get to the Coliseum early: I hear there’s gonna be some good tailgating. Don’t forget the scrimmage will be radioed live on 980 The Beast with Jordan Moore and John Jackson. I’ll make a guest shot at just after 4.