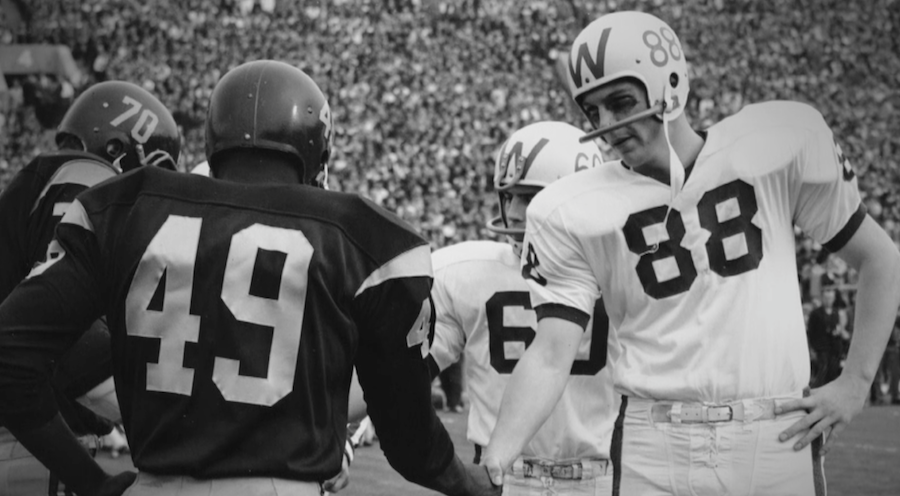 I love the senior walk off of the practice field for the last time after the last practice. Great tradition in a place known for great traditions. The younger guys give them good natured farewell “beating” through their human gauntlet leaving Howard Jones/Brian Kennedy field.

It’s special and of course a bit melancholy.

I love scoring 100 points in college basketball…..again. This team has won 6 in a row, 9-0 at home heading into conference play. I still think this team ends up a little over .500, but depending on league placement, that might sneak them into the big dance a year early, and certainly if not that, a trip to post-season play in the NIT to set up what promises to be a big year in 2016-17.

Coach had to have some time to get his own guys in, get them geared up and age them a little. Here come the Trojans.

For Christmas in 1962, I opened an envelope from my father. I had always before received toys, or, from relatives, clothes (ugh). Never an envelope to that point.

I was as disappointed as an 8 year old could be to get a piece of paper in an envelope.

In 1960 my dad started taking me, his then 5-year-old eldest son, to sporting events. We saw an old LA Angels game at the old Wrigley Field in downtown LA, and a couple of Marshall High football games, the first in ’60 at home against Lincoln, where I laughed at the thought of a person dressed as a Tiger when it wasn’t even Halloween. Later we ran back and forth from the car to the fence in a pouring rain to watch pieces of the Marshall-Garfield city quarterfinal at East LA College, won by the Barristers.

I think I got to go to the old LA Classic in basketball at the brand new Sports Arena during Christmas of 1961. I have a program, but maybe it’s just because he brought it to me. I know I attended a lot of LA Classic games over the years when I was a kid, but which one was first is a little fuzzy looking back 50+ years.

I definitely saw the final outs ever for the Dodgers at the Coliseum in September of 1961, as we were attended the Ringling Brothers Circus at the Sports Arena and as we exited the Greatest Show on Earth to a spot under the torch just in time to see Jim Gilliam ground into a game ending double-play.

In ’62 I went to a Dodger game or two, and even joined the Junior Angel Fan Club (my dad worked for KMPC, the Angel station) and got to witness Bo Belinsky’s no-hitter on May 5, 1962.

So it wasn’t as though I had never seen a sporting event.

But that football season of 1962, I got my first taste of USC football. I saw the games against Duke and Navy with tickets pop got from the station. I didn’t know a ton about the game, but I sure love the band and the horse. And the winning. And I started listening on the radio and following “my team”.

And they never lost. Ever.

So I open the envelope and it’s the biggest ticket I have ever seen…giant sized and glossy and shiny and on hard paper, not like a regular season ticket. It was a ticket for the Rose Bowl. I had known of the Rose Bowl for a while. For some reason there was a pennant on the wall over my baby brother’s bed from the 1958 game featuring Oregon. I did not know about it’s importance in the sporting world, but I knew I got to go, and that felt very exciting.

“It’s on New Year’s Day, January 1st and I can’t go I have to work on radio in San Francisco that day, but your grandpa is going to take you”.

I loved grandpa, good guy and cool guy for an old guy (he was younger then than I am today). He took me fishing on his boat in San Clemente and we spent time together in his beach house there often through the years. I liked him, in fact, a lot more than my father did I’m pretty sure.

I did some due diligence (the pre-cursor of prepping a broadcast) and read up on as much as I could about the game to come. As a matter of fact, another gift was a book on the history of the Rose Bowl, which I pored over several times before the game.

I learned that Wisconsin was a definite roadblock in our quest for winning every game and that USC “owned” the Rose Bowl through the years.

Game day came, and grandpa and grandma picked me up early (I had to be rousted out of sleep it was dark and so early) and they advised me to take a heavy jacket….”it gets cold and dark fast before it’s over”.

I can’t remember much about the drive over. I’m sure we talked some. But we parked on some street and went on a rather long walk as the sun came up in Pasadena. We came around a corner and all of a sudden there were thousands of people standing along a big empty street.

“Where are we, what is going on here?”

“We’re at the Rose Parade”

Cool! A parade. And then came the bands and beautiful floats and guys in cars and guys on horses. Wow! I LOVE a parade!

Back to the car, drive to the stadium and a walk to the seats. I might have been napping during some of this in the car. I don’t remember much until waking into the stadium and seeing the enormity of the stadium, a DIFFERENT stadium than the familiar Coliseum!

Our seats were really crappy. Wisconsin side, and down low in the days before the field had been lowered. When the Wisconsin players, dressed in white with red trim stood up, we really couldn’t see much but their back and backsides. Everyone around us yelled for them to sit down so we could see. They did not.

There was a lot of yelling. And bands playing and a guy in a Badger suit and cheerleaders jumping around. But they were mostly quiet. We got way ahead and my grandpa (not sure where grandma got off to) wanted to know if I wanted to go to “beat the traffic” (whatever that meant) . I suggested I wanted to stick around.

Then the quiet people in white started hollering more and more. And the score was changing form us being way ahead to us being ahead by just a little. And I could see the football flying through the air followed by roar after roar. It was getting dark. Very dark. Too dark, I knew from playing in the street with my friends, to see the ball. And when you can’t see the ball, it’s time to stop playing and go in for dinner.

I could see the clock running out, and then a huge road from guys dressed in cardinal and gold and the people in white got quiet and started to leave.

And as the clock ran out, my grandpa grabbed me by the hand and we moved down to the front row, and then all of a sudden we and thousands of others ran onto the field and towards the goal post.

I watched as big men shook the goal posts back and forth until they started to break with a loud crack you could hear no matter where you stood. And they fell, and everyone squished us as we reach for a piece of wood on the ground painted red and gold. I got a piece the size of a pencil and stuffed it in my pocket.

As I stood up, a guy in a USC uniform wearing #19 basically ran me over. He stopped and picked me up, dusted me off and said sorry and started off on his way to the locker room.

I did something I had seen athletes do in sports and swatted him on the butt with my hand. Then Prince Hal Bedsole dropped his towel right next to me, and I grabbed that before anyone else could react. I still have it. One of three I have—Mike Garrett’s that he actually tossed to me when he finished speaking to the crowd at the Coliseum after his final home game ever against Wyoming (just after the famous picture where I am reaching out touch my hero), and one from Bobby Chandler who left it on the bench when the game ended in the Rose Bowl against Michigan in 1970. Again we were on the field when that game ended.

Did I ever tell you how I was standing ON the Michigan sideline, rooting for Stanford when Rod Garcia won the game with a last second field goal? Like standing next to Michigan players. With my little brother and his friend and my girlfriend. Crazy.

The traffic has never changed. It was horrific. No wonder an NFL team will not go there. I am sure I talked for a few minutes, and then fell asleep the entire rest of the way. When we got home, my grandma was magically back in the car, and they bid me adieu at my house on Holly Knoll Drive.

The next morning, the sports page was awaiting me at the breakfast table with my bowl of Trix. And after reading it, I cut it up and dutifully put it into the scrapbook that started with the Belinsky game. A scrapbook that started a lifetime of keeping sports clippings, which continues to this day and will continue until I check out.