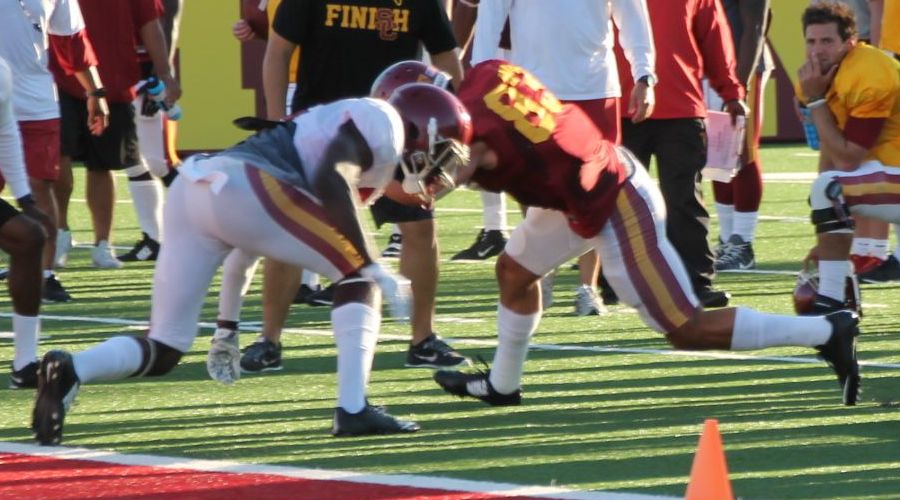 No treat coming east from Santa Monica for practice that starts at 5:30. If you leave at 2, you get there at 2:45. If you leave at 3 or later, it takes forever. I left at 4 and walked in at 5:40….still too early to avoid watching stretching.

It was quite a bit warmer today with both the early start and the opening of a five day long predicted heat wave.

Harvey Hyde is here! Good to see the Coach. Of course if you want t come out for good eats and company, I am appearing on his radio show tomorrow (Thursday, August 13) night from 6-8 live from Settebello on Colorado in Pasadena. It’s our annual kickoff show.

The team is in full pads today. Dedeaux Field is packed with boosters and donors eating and drinking and being serenaded by a portion of the band.

The first scrimmage comes quickly, and we find that the full pads only means light tackling, not really full hitting. As Coach HH says: “You have to learn how to carry your uniform before you can really start to hit.”

It does give me a good chance to start filling in my spotting chart used during broadcasts, and I can tell you this: one way I can tell this team might be a better one than recent years is that I was/am able to put the charts together without any real guesswork at most positions. In other words, we are set up already at a bunch of sports with known quantities, instead of wading around camp wondering who will start here or there.

This season, it’s really more about filing in the depth chart, and sometimes even that dance card is pretty well filled.

The team breaks up to combat each other in 1 on 1 drills. High energy, high intensity and FUN! Something the Dodgers could use some of.

This team seems to have some of those pesky “intangibles” you hear so much about. Toughness, intensity and cohesion. Much more than last year.

The media members say if offered the chance to participate in such drills, even just against each other, they would opt out. Not me, I’d give it a go for sure.

On a personal note, I have begun to exercise after my knee surgery and also am eating better. Gently adding minutes of running to minutes of walking. Today, however, my legs are sore, and I am using a chair at practice.

Colin Cowherd is here. Looking forward to his new show.

I notice some guys who were running everywhere on day one are now walking some of the way to their next destination on the field. Summer camp is meant to be conditioning as well as learning. It looks like some of the men are hitting the first week wall. Good thing they have tomorrow off. By the way, the first team OL runs all the way. Maybe not fast, but there’s no walking.

The second scrimmage is 3rd offense vs 1st defense, then 2’s vs 2’s and then 1st offense vs 2’s and 3’s. It’s hard to report on much since they are almost 100 yards away and I have no binoculars.

What I do feel is that today was not particularly crisp. A lot of drops on both sides, and missed assignments here and there. I’m thinking that they are tired and NEED that day off tomorrow.

In the late scrimmage, Steven Mitchell puts on a couple of great displays of open field running—turning this way and that—to lose the defender trying to figure out where he’s heading so he can tackle him.

And Ronald Jones——WOW! He seems to have “it”, and reminds me of that guy from awhile back.