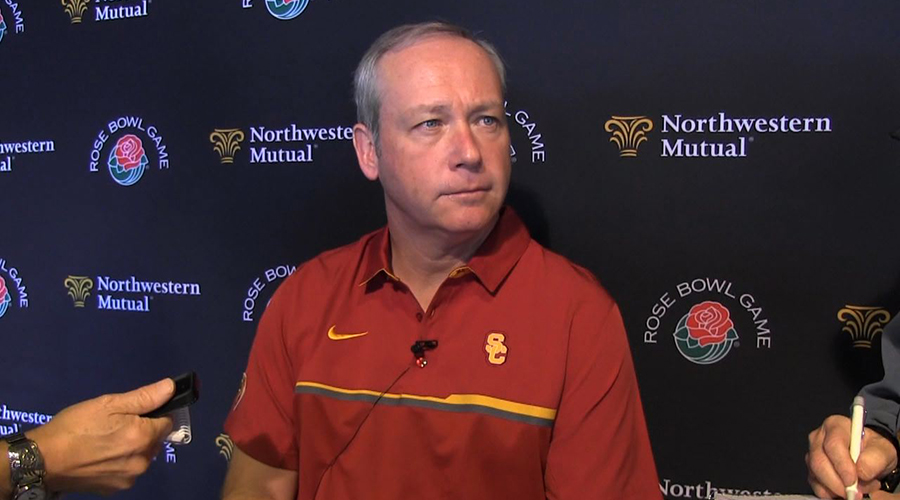 Those widespread rumors at Friday night’s SDCCU Holiday Bowl became reality when it was officially announced on Saturday afternoon that USC Trojans defensive coordinator Clancy Pendergast (photo above) and special teams and tight end coach John Baxter would not be returning to head coach Clay Helton’s coaching staff for the 2020 season.

The Trojans, who lost badly to the No. 16 Iowa Hawkeyes, 49-24, in a game that illustrated the depth of the problems on USC’s defense and special teams. The Trojans’ defense gave up 328 yards to the Iowa defense, which included the Hawkeyes scoring touchdowns on their first five possessions while the Trojans’ special teams gave up their third kickoff return of at least 97 yards this season — and the second kickoff return touchdown.

“I want to thank Coach Pendergast and Coach Baxter for their dedicated service and efforts,” Helton said. “However, in evaluating our team’s performance this year and after consulting with AD Mike Bohn, it is evident that these changes are necessary.

“My coaching staff and I fell short of fielding a championship team. We are taking immediate steps to improve our competitiveness and meet the winning expectations of our student-athletes and fans.”

Trojan opponents scored 30 or more points six times this season, although not all of those points were strictly attributed to the defense.

In two of the three bowl losses in the Clay Helton era, the opponents (Iowa and Penn State) each scored 49 points.

Combined, Pendergast had three stints as a USC defensive coach and this past season marked his second campaign in a row that he was Troy’s defensive coordinator.

No replacements for Pendergast or Baxter were announced on Saturday.

The departure of Pendergast and Baxter was announced on the same day that outside linebacker coach Joe DeForest had taken a coaching position (safeties) at North Carolina State.