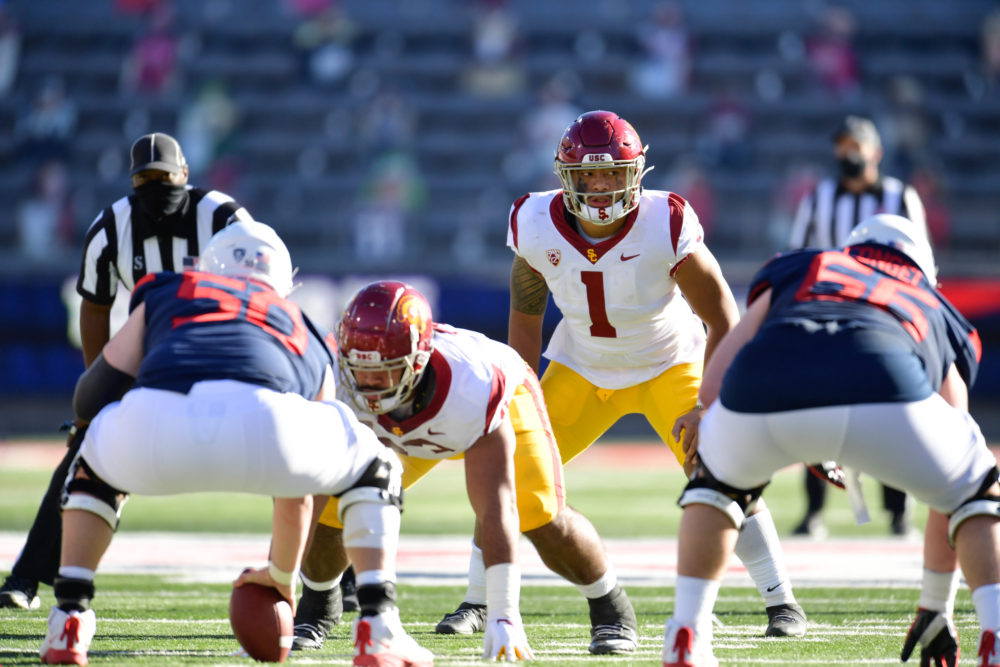 USC has played its last two games without starting inside linebacker Palaie Gaoteote and now it looks as though the Trojans could be without him on a more permanent basis as Gaoteote entered his name into the transfer portal on Monday morning.

Gaoteote entered USC as a five-star prospect and the No. 15 overall recruit in the class of 2018.

He saw the field plenty as a true freshman, starting five games in place of injured veterans and playing in 10 total games. He finished the season with 38 tackles, including two sacks.

He took over a starting spot last season but was slowed by injuries and missed all or parts of seven games. He posted a career-high 14 tackles in a win against Utah last year.

He started this season against Arizona State and Arizona, but left the Arizona game due to a lower leg contusion and a head injury. That put him in concussion protocol, where he has stayed, missing both the Utah and Washington State games. He registered nine tackles in the games against the Sun Devils and Wildcats.

The Trojans have had to find answers at linebacker with Gaoteote injured. They’ve turned to Kana’i Mauga at the position and he’s responded with two good games. But the depth has been tested as both Gaoteote and starting middle linebacker Ralen Goforth missed Sunday’s game. USC used a dime look almost exclusively and had safety Talanoa Hufanga working at linebacker.

If Gaoteote does elect to transfer, USC will have just four scholarship inside linebackers available, with Goforth, Mauga, Tuasivi Nomura and Raymond Scott. USC was hit before the season began with two big injuries at the position, when Jordan Iosefa and Solomon Tuliaupupu were lost for the year.

Gaoteote was one of the players that head coach Clay Helton raved about during fall camp, saying he’d taken extremely well to defensive coordinator Todd Orlando’s coaching and that Helton expected big things out of Gaoteote this season. It’s always been clear that the talent is there for Gaoteote, and there have been real flashes of great play, but it still hasn’t come all the way together for him to be a consistent, dominating presence in the middle of the defense. But Gaoteote would still be eligible to play in the 2021 and 2022 seasons, so if he does decide to transfer, it would be a hit to the USC depth chart at that position.

Another interesting aspect of this decision is that Gaoteote’s younger brother has been committed to USC’s 2021 recruiting class since all the way back in February of 2018. But the four-star linebacker looks to be headed elsewhere at this point, as 247 Sports now projects him to land at Michigan State.

Gaoteote could still make the decision to remain at USC. Entering the transfer portal allows coaches and recruiters from other programs to begin contacting the player to begin the transfer process, but a player is allowed to remain with or return to his original team. USC hasn’t had the same familiarity with the transfer portal as some other programs, but plenty of Trojans have come and gone through it. Recently, outside linebacker Abdul-Malik McClain entered his name and completed a transfer to Jackson State. His brother and wide receiver Munir McClain entered his name but eventually removed it. Kicker Chase McGrath entered his name into the portal last week.

Former USC safety Bubba Bolden was a high school teammate’s of Gaoteote at Las Vegas Bishop Gorman. Bolden and tight end Brevin Jordan — who was also at Bishop Gorman — are at Miami and Bolden was quick to provide that as a potential landing spot for Gaoteote.