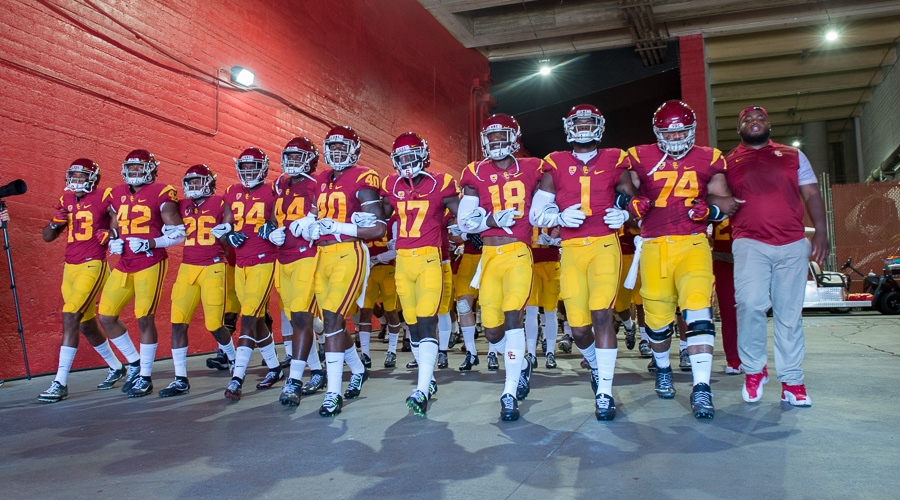 A statement signed by “Players of the Pac-12” was released on Sunday, as a group consisting of players from all 12 conference programs threatened to sit out fall camp and games announced unless their formal demands to address health and safety, fair treatment and concerns over racial injustice are met by the conference.

The statement repeatedly uses the hashtag #WeStandUnited and the first two lines are:

“To ensure future generations of college athletes will be treated fairly, #WeAreUnited.

The opening statement closes: “#WeAreUnited in our commitment to secure fair treatment for college athletes. Due to COVID-19 and other serious concerns, we will opt-out of Pac-12 fall camp and game participation unless the following demands are guaranteed in writing by our conference to protect and benefit both scholarship athletes and walk-ons.”

There are four sections to the players’ statement, and break down into:

Health and safety protections, specific to Covid-19 protections. The players demand the ability to sit out this season without losing eligibility or a spot on the roster. They also want to prohibit and void any agreements that waiver liability. And the players want to appoint a third party to enforce health and safety standards.

Protecting all sports, which includes asking coaches and administrators to reduce excessive pay, end performance and academic bonuses and to end lavish facility expenditures in order to preserve all sports in the conference.

End racial injustice in college sports and society, which asks the conference to form a permanent civic-engagement task force to “address racial injustice in college sports and society.” The players also ask that 2% of conference revenue be directed by players to “support financial aid for low-income Black students, community initiatives, and development programs for college athletes on each campus.” And form a Black College Athlete Summit.

The economic freedom and equity section is the final ask, with players demanding guaranteed medical expense coverage, covering six years after eligibility ends. There is also a demand regarding name, image and likeness, distributing 50% of a sport’s conference revenue to those athletes in the conference, six-year scholarships, elimination of all policies that limit freedom of speech, a one-time transfer without sitting out, the ability to return to school if a player goes undrafted, and due process rights.

There is a lot to unpack in these requests, and the truth is that there is absolutely no way they will, or even could, all be met by the time fall camp begins–for some Pac-12 schools on August 17.

The group says it has participation from players at all 12 Pac-12 programs, though of the 12 players who have come forward at this point as being media contacts for the group, none are from USC. Though, Isaiah Pola-Mao, Frank Martin, Chase Williams and Jalen McKenzie are a few who shared the message or the #WeAreUnited hashtag on social media.

The group who submitted the statement said it did so on behalf of hundreds of student-athletes throughout the conference. Washington defensive back Elijah Molden offered his thoughts on the matter. They read, in part:

“This is a long time coming and I fully support the sentiment of the boycott. While I agree with most of the demands, there are a few that I cannot get on board with. My initial reaction was how some of the demands seem unrealistic and far fetched given the context of our unique situation (COVID, financial restrictions, time, etc.). But that is not the point. The point is, us players need to have our voices heart. We need to stand up for ourselves and our loved ones, especially under the circumstances we are currently in. So I ask you all, please question your emotionally charged reaction to the news. Instead of reacting quickly, consider the entire situation…see both sides and remember that the situation isn’t binary. This way we can actually see some change and implement procedures that protect us players. Then we can FINALLY play some damn football.”

“I agree with everything this movement is fighting especially the health concerns but not playing this season isn’t an option for me I got ppl that need to eat. so if the NCAA wants to use me as a lab rat it is what it is.”

Several of these topics are in the process of being met, as the one-time transfer rule and name, image and likeness are being addressed by the NCAA.

It would stand to reason that the conference and schools would take another look at their procedures regarding testing and quarantine, as questions and concerns about Covid-19 continue for more and more players. Though, the Pac-12 schools that are reporting their testing numbers have been able to limit their student-athletes from testing positive and have stopped any spread from those who do test positive. What will be very interesting to watch is what happens when the general student body begins to return to campus, either due to in-person classes starting, or students returning to the area. USC, for example, had at least 40 cases confirmed along its fraternity row last week.

Jack Yary, who signed with USC in the class of 2020 before announcing that he’s headed to Washington instead, posted today that his father, USC All-American offensive tackle Ron Yary, has been hospitalized.

Giving 50% of college football’s Pac-12 revenue to Pac-12 football players is a massive ask and virtually guaranteed not to happen, especially in light of the demand that all other sports are protected. Simply dipping into endowments–the players suggested Stanford use some of its endowment to fund the sports it announced it would cut–is not a realistic ask, as using endowment funds would have a significant ripple effect on all those things that the income generated from those endowments already funds.

Bumping the guaranteed scholarship from a four-year to a six-year would be a big benefit to players, and a number of players already are on campus for five years. The idea of players being allowed back to school if they are not drafted is something that also should be discussed.

Clearly, this will be an interesting situation to monitor moving forward, and this is just the beginning of the discussion between the players and the conference.