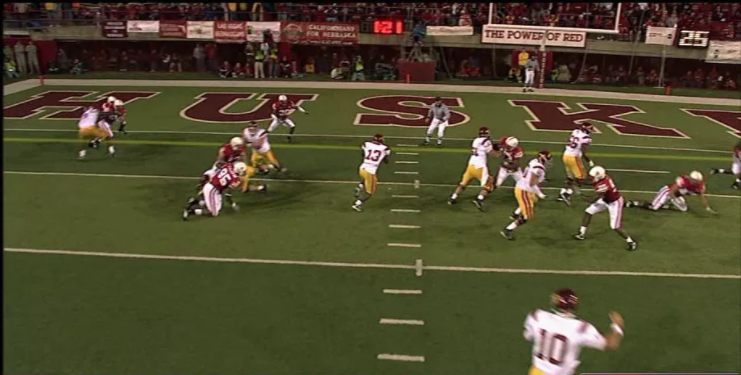 On this date in 2007, USC took its No. 1 ranking on the road and, with ESPN’s College GameDay in town, absolutely demolished the Nebraska Cornhuskers.

The Trojans had two weeks to prepare for their trip to Lincoln following a so-so start to the season against Idaho. But there was nothing so-so about this game.

Nebraska held a 10-7 lead in the second quarter before USC ran off 35-straight points to take a 42-10 lead into the fourth quarter.

USC eventually won 49-31 in a game that wasn’t that close.

The 49 points were the third-most ever scored against Nebraska at home, and the most against the Cornhuskers in Lincoln since 1945.

Led by Stafon Johnson’s 144 yards and one touchdown on just 11 carries, USC ran for 313 yards and five touchdowns against Nebraska. Chauncey Washington scored twice, and Stanley Havili and Allen Bradford added one each.

Quarterback John David Booty didn’t need to do much through the air, but he still threw for 144 yards and two touchdowns–one to Havili and one to Anthony McCoy.

Defensive end Kyle Moore and Terrell Thomas recorded third-quarter interceptions, which helped USC to a 21-0 scoring advantage in the quarter.