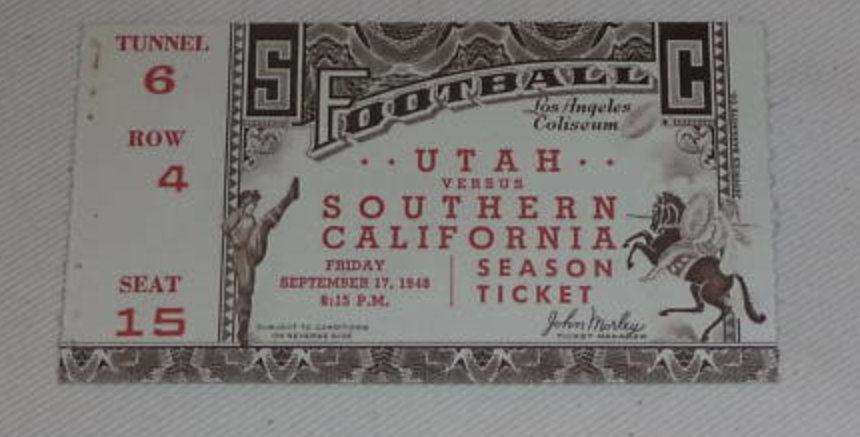 This date in USC history offers a number of games to choose from, though few are all that aesthetically pleasing. Instead, we’ll go with one of historical significance, as on this date in 1948, the Trojans played their first televised game in the Coliseum.

USC took on Utah in the first game ever televised in the Coliseum on the evening of Sept. 17, 1948. This was also the second time ever USC appeared on television, following the previous year’s Rose Bowl game.

KLAC-TV, Channel 13, went on the air that day and its first broadcast was the game between the Trojans and Utes.

USC won the game 27-0, though the broadcast had a few hiccups. Reportedly, viewers saw mostly snowy static throughout the first half, before the signal was able to be cleaned up at halftime.

The USC – Utah series didn’t get off to a great start for the Trojans, as the Utes won the first two meetings in 1915 and 1916. But this win for USC was part of a six-game winning streak and then this one ended, USC had outscored Utah 169-9 over five games.

The Trojans likely needed this win to wash the taste of their previous games out of their mouth. USC began the 1947 season 8-0-1, but lost its final two games–at home to No. 1 Notre Dame and in the Rose Bowl to No. 2 Michigan–by a combined score of 87-7.

This USC team experience a second “first” later in the 1948 season, as the trip to take on Oregon was the first time the Trojans traveled by airplane to a game.

Matt Barkley tied a school record by throwing for five touchdowns in a 38-17 win against Syracuse. He threw for 324 yards, while USC ran for 175 yards. Robert Woods led the Trojans in receiving with eight catches for 82 yards and a touchdown. Marqise Lee, Randall Telfer, Rhett Ellison and Xavier Grimble also caught scoring passes.