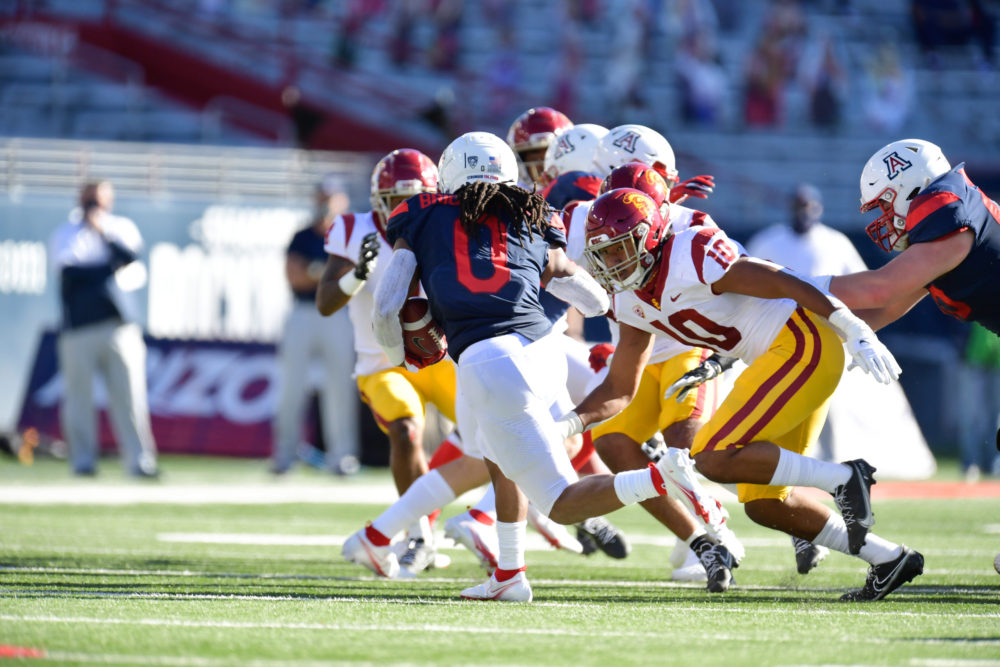 USC’s defense allowed more points, total yards and first downs against Arizona than it did the previous week against Arizona State, but Trojans defensive coordinator Todd Orlando said he saw improvements on that side of the ball against the Wildcats.

“I thought maybe we were a little too uptight in game number one,” Orlando said. “I thought we just played looser and we played faster and I thought we played physical.”

Orlando has mentioned a number of times that without having spring ball, and removing the first week of fall camp as there was no or limited contact, this is just the fourth week of true practice in this new defensive system.

“I think it’s going to get better. Obviously we’re kind of a work in progress right now as we continue to get reps. But it will,” Orlando said. “I’ve been in this system for a long time and at the end of the day, it comes down to the kids learning the way that I process how we want to call the game and the things that we want to do. We want to try to play explosive football on defense — create [tackles for loss] and get people in a predictable third down, and then come after them. I think it will get better as we continue on this season.”

USC was hit by the injury bug before and during that Arizona game, as the Trojans played without defensive linemen Brandon Pili and Caleb Tremblay, then lost outside linebacker Drake Jackson, inside linebacker Palaie Gaoteote and safety Talanoa Hufanga for large portions of the game. In their place, Hunter Echols, Raymond Scott and Chase Williams all received significant reps and Orlando said he was proud of the way all the backups played. He specifically pointed to Scott, who he said saw 47 plays in his first real action at that position.

“Ray is a good example where it’s not oh no, it’s oh yes, when he’s running off the sidelines,” Orlando said. “If a guy jumps on the field for us, that means he’s ready and we feel really good about those guys that ran off the bench…I was really, really proud of those guys who came in off the bench.”

Orlando said there’s still plenty of room for improvement from this defense, and it starts with getting the little things right.

“If it’s third and 16 and we’ve got a guy dead to rights on a tackle, let’s get him down,” Orlando said. “Just a couple things here and there in the game that’s the difference between extending drives and giving up points, and not giving up points.”

USC linebacker Ralen Goforth has taken on the responsibility of starting at middle linebacker in this defense the past two weeks and he said he hasn’t been happy with his performances in either game, citing a need to take better angles and have more success getting off blocks.

“I’m a firm believer in being a perfectionist,” Goforth said. “I grade myself pretty hard each and every day.”

Orlando said taking better angles to the football is something the entire defense can get better at.

“They played a ton better in this game, the physicality part of it,” Orlando said. “Just these minor things that it we can get them cleaned up are the difference between first downs and non-first downs. But they’re all correctable. This isn’t one of these ability deals where really at the end of the day we don’t have the ability to do it. It’s not that at all. They’re all correctable fundamentals and techniques and we’ve already started them this week — yesterday — in terms of our individuals, just thinking these things up.”

Orlando echoed Goforth in his drive for perfection.

“We’re not in this business to be average or a little bit good,” Orlando said. “We want to try to be great and just work at it every day.”

On Saturday, USC is going to be tested in a different way than what Arizona State and Arizona brought. Orlando referred to Utah’s offense as wanting to play “big boy ball” with the defense. This is a veteran Utah offensive line, and while the Utes will have new starters at quarterback and running back, the philosophy on offense will be unchanged. This is a Utah team that, as always, will want to wear down an opposing defense with the run game.

Plenty of focus will be on defensive lineman Marlon Tuipulotu, who has clearly been one of USC’s best players on that side of the ball through two games. Tuipulotu is being asked to do a lot this season and has put together two high play counts in two games. Orlando said they aren’t concerned about his activity level right now, and they are already monitoring it in order to keep his play at that same level throughout the year.

“That guy’s a warrior,” Orlando said of Tuipulotu. “We’re being smart with him during practice…This offense is going to be a little bit different…This game he’s going to have to play really well because these guys are going to run the ball right at us.”

USC is once again seemingly at a slight schematic disadvantage for the second time in a row, as the Trojans don’t have any 2020 film of their opponent. Arizona was able to scout USC from the season opener against Arizona State, while Utah now has two weeks of film to watch. But the Trojans might have the next-best thing, as safeties coach Craig Naivar was the acting defensive coordinator for Texas last season, and the last coach to prepare a defense to face the Utah offense as the two teams met in the Alamo Bowl.

Orlando said Naivar has had a lot of input in the game prep, calling it crazy that this is the third game the Trojans have had to prepare for without being able to study any recent film.

“He’s the last guy who has physically seen these guys,” Orlando said of Naivar. “As we go through the film, he can tell us things that he saw from that game and can tell us about the personnel, too.”

Utah will need to replace Moss as well as longtime starting quarterback Tyler Huntley this season.