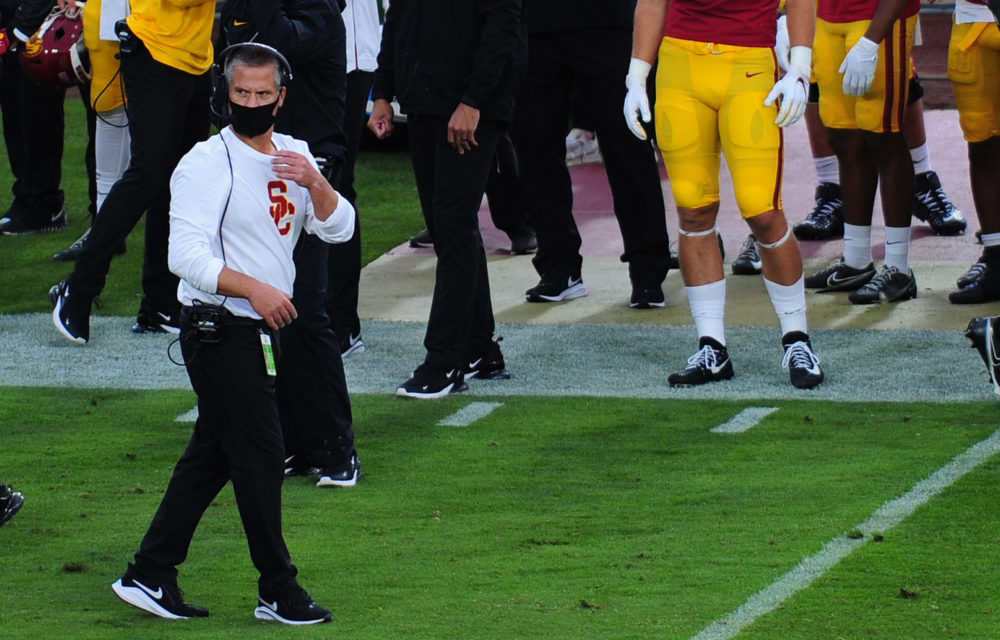 After allowing 258 rushing yards to an Arizona State team breaking in an entirely new group of running backs, USC’s defense has a clear issue to address heading into Saturday’s game against Arizona. Since the 2016 season, no Pac-12 team has run for more yards than the Wildcats, as their 11,358 yards on the ground is nearly 300 yards more than Oregon. Arizona dipped under the 200-yard per game mark for the first time in five seasons last year, but the Wildcats’ 174 rushing yards per game was still good for third in the conference.

Ultimately, Orlando said there are a lot of things to clean up, but that he was proud of the way the defense kept fighting and ultimately made the plays they needed to make at the end of the game.

Orlando said there were a few alignment mistakes from the USC defense as the players were challenged by an Arizona State offense that used a number of pre-snap shifts, trades and motions. Specifically, Orlando said the linebacker play needs to improve.

“Eh, they’re okay,” Orlando said of that position’s performance against the Sun Devils. “I I have no problems with saying that because I coach the position. Gotta do a better job  of getting those guys to play faster, more physical and more violent. They know. We went into that room and anytime you give up the amount of running yards that we did, that is the position you gotta get that stuff corrected. It’s all of us. I gotta do a better job coaching. We gotta do a better job of getting off of blocks and separating. And we will. I can promise you that.”

Orlando was less concerned with the 111 rushing yards piled up by ASU quarterback Jayden Daniels, as he said with talented dual-threat quarterbacks it becomes about picking your poison. But the total rushing yard number was a sore spot for him. ASU true freshman running back Chip Trayanum ran for 84 yards and two touchdowns, averaging seven yards per carry. Junior college transfer Rachaad White averaged more than six yards on his 12 carries, as he finished with 76 yards on the ground, and also took a short pass 55 yards for a touchdown.

“When you’re giving up that many rushing yards, that’s not a good thing with us,” Orlando said. “When you have a dynamic quarterback that maybe scrambles and does that stuff, we’re not talking about those things. Those happen…But just the traditional tailback running game and if you’re not going it good, you have no chance of playing elite defense.”

Orlando said that the emphasis for the Trojans this week will be in that run game defense, which is where Orlando has typically made the most impact when he’s taken over a new defense.

“It was a collection of stuff,” Orlando said about what went wrong this past Saturday. “But it’s all correctable stuff. The ones that we got hit on — we actually had two guys on the same side — was just alignment issues. So that gives you zero chance. But there’s an expectation and obviously from a standpoint of talent level, it’s there. I’ve got to do a better job of getting these guys to play faster, and I have no problem with saying that.”

Playing faster will be a theme on Saturday. While Arizona State didn’t press the tempo against USC, the expectation from Orlando and the Trojan coaches is that Arizona definitely will. While ASU went into a sugar huddle and then worked the play clock a big with shifts and trades, looking at take advantage of alignment mistakes, Arizona is likely to push the pace as often as possible.

“It’s kind of unique to go back-to-back on teams like that,” Orlando said. “So we’re going to have to get to the ball and be fast in terms of our assignments and alignments. And we know they’re going to try to run the football after they saw that (Saturday’s game), so we have to stop the run to begin with.”

Orlando said the linebackers had a positive meeting in the aftermath of the Arizona State game. It was Ralen Goforth’s first game starting at middle linebacker for the Trojans, and neither he nor Palaie Gaoteote had any significant depth behind them to get much of a break. But the expectations for both this weekend is to take their games up a few levels.

“I loved our mindset when we were in the linebacker room,” Orlando said. “It was like, I’ll get this right, I promise you. There was no palms up or pointing fingers and that’s a really, really good sign for, I care and I’m going to get stuff corrected. And I was the same way. I was, I gotta do a better job, and we will. I promise you.”