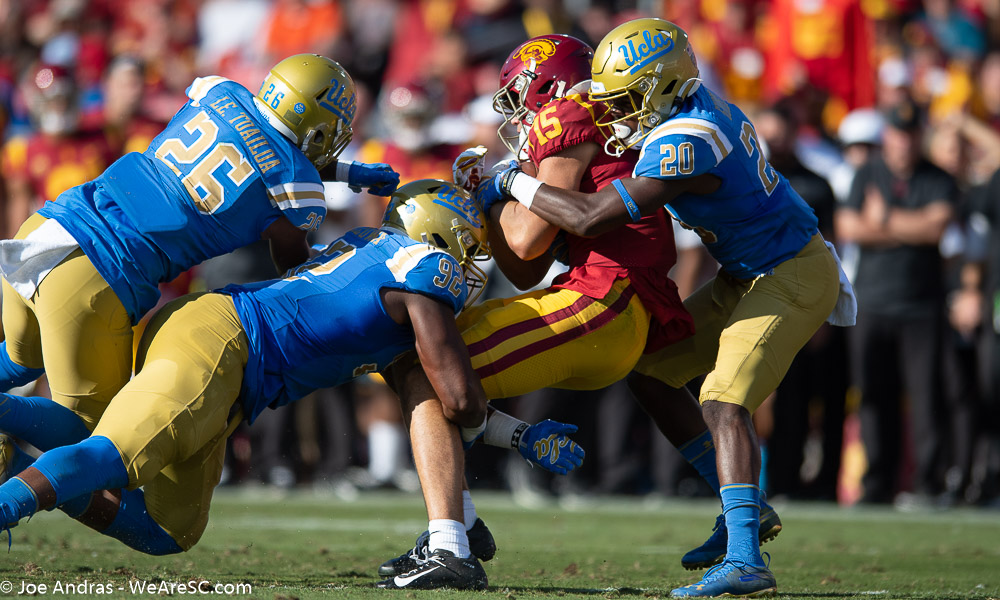 The battle for the Victory Bell kicks off Saturday at 4:30, as the USC Trojans aim to complete an undefeated regular season and lock up a spot in the Pac-12 championship game, and the UCLA Bruins hope to announce themselves with a major win.

UCLA wasn’t expected to do much this season, but the Bruins are 3-2 and pushed Colorado and Oregon in those two losses.

This is Chip Kelly’s offense and one that will always rely heavily on the running game with some pre and post-snap misdirection. The Bruins rank 16th in the country and second in the conference with 227 rushing yards per game. UCLA is an average passing team, so how well USC stops UCLA’s rushing attack could go a long way in determining the winner of this game.

Thompson-Robinson has improved as a passing quarterback, but he still isn’t someone who is likely to beat USC simply standing in the pocket. He’s completed 58% of his passes this year for 230 yards per game and eight touchdowns against two interception. But he’s most dangerous creating extra time inside or outside the pocket, or tucking the ball and picking up yards with his legs. USC got burned early this season by quarterbacks running with the ball and the Trojans have to be prepared for it on Saturday. Thompson-Robinson has run for 210 yards and three touchdowns this season, as he’s averaging 70 rushing yards per game.

Chip Kelly is going to get creative with these two running backs and the Trojans will likely need to be completely buttoned up when it comes to pre-snap assignments and reads. Arizona State challenged USC with a bunch of shifts and motions and Kelly’s offense is capable of doing that as well. Felton is a Swiss Army knife as an offensive player and is just as much of a threat in the passing game as the running game. He leads the team with 578 yards and five touchdowns on the ground and he’s second on the team with 17 receptions. It’ll be worth watching how effectively USC can keep Felton contained, especially if he gets the ball out in space. Brown is a big back who has 290 rushing yards and three touchdowns this season. Of note is that he’s carried the ball 46 times and lost just one yard all season. He’s also a capable pass catcher out of the backfield.

Kyle Phillips has been the top target this season, with 23 receptions for 246 yards and a touchdown. No other receiver has more than four catches this year. But the Bruins have done a terrific job spreading the ball around, as nine different players have receiving touchdowns.

Tight end Greg Dulcich is a big part of this UCLA offense and has been a big-play threat this season. His 16 receptions ranks third on the team, but he leads the Bruins by quite a bit with 312 receiving yards and his two touchdowns make him the only UCLA player with more than one scoring reception.

The UCLA offensive line is playing at a pretty high level right now and it’s paving the way for 5.1 yards per carry. Opponents only have eight sacks this season, but five of those came last week against Arizona State.

UCLA and USC have posted fairly similar defensive numbers this season, though the Bruins have been better against the run. UCLA has given up 373 total yards (46th overall) per game, with 229.4 passing yards (61st overall) and 143.6 rushing yards (47th overall). But UCLA has gotten into the backfield at a terrific rate and has 18 sacks and 39 tackles for loss through five games.

Osa Odighizuwa ranks second on the team with four sacks and has been by far the most active player up on the defensive front. A lot of the defensive stats for UCLA have come from players in the back seven, as the guys up front occupy blockers. One of the stories of the game will be how well USC’s offensive line does against UCLA’s defensive front, because the Trojans were stuffed by Washington State this past Sunday as USC’s big men dealt with an odd couple weeks of preparation.

Linebacker Caleb Johnson leads the team with 4.5 sacks and is tied for the team lead with six tackles for loss. The Trojans didn’t do a great job of getting into the second level and blocking Washington State’s linebackers in the last game, so how they handle someone like Johnson will be worth watching. He also has one of UCLA’s four interceptions. Outside linebacker Mitchell Agude has been a key defender as well, as he leads the team with three forced fumbles and 7.5 tackles for loss. UCLA has the linebackers to play games before the snap with USC’s offensive line and try to create blocking issues in both the passing and running games.

Will UCLA rely on a veteran group of defensive backs and allow them to play man-to-man against USC’s wide receivers? There is talent back there, but they won’t be able to hold up for an entire game. Blaylock leads the team with 34 tackles and an interception, while Eboh is plenty familiar with USC as a grad transfer from Stanford.

UCLA hasn’t generated much in the return game this season, but the Bruin kickers are solid. Punter Luke Akers does have one attempt blocked this season.

UCLA didn’t attempt a field goal through its first three games, but Barr-Mira has gone three-for-three over the past two. He hit one from 44 yards against Arizona State. RJ Lopez handles kickoffs and has allowed 15 returns on 30 kicks, with 13 touchbacks. Opponents are averaging 20 yards per kickoff return.

Akers is averaging 42.6 yards per punt, with eight fair catches on 20 kicks. Opponents are averaging nine yards per return.

Felton has the speed to take any touch the distance, but he hasn’t truly gotten loose on a kick return this season. He’s averaging 21 yards per return this season, and USC did very well covering kicks against Washington State.

Phillips has just five yards on two returns this season, and just like kickoff coverage, USC has done very well in punt coverage this season. Keeping UCLA from grabbing or swinging momentum with a big special teams play could be important on Saturday.