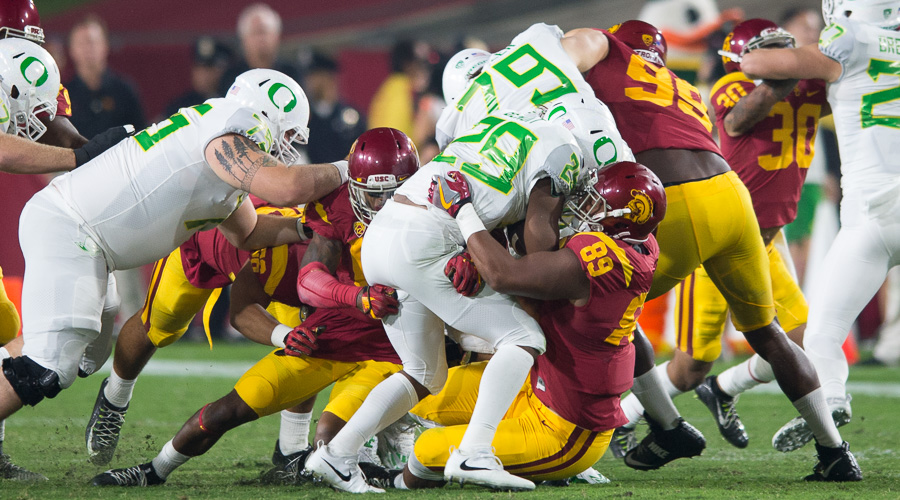 This Oregon offense is driven by a potential Top-5 NFL draft pick in quarterback Justin Herbert, but it’s still an offense that works best when the run game gets going. The Ducks rank third in the conference with 190 rushing yards per game, and last week’s win against Washington State came largely via the legs of CJ Verdell, who ran for 257 yards and three touchdowns. Verdell’s 753 rushing yards leads the team, but the Ducks also have a big body in Cyrus Habibi-Likio, who leads the team with six rushing touchdowns.

The run game is paced by a talented and veteran offensive line, a line that is the best in the conference and arguably one of the best in the nation. Oregon’s offensive line has a combined 193 starts, which is far ahead of the second-place team nationally in that category. Left tackle Penei Sewell receives the accolades, but right tackle Calvin Throckmorton hasn’t allowed a sack in his last 1,868 snaps, and the trio of Shane Lemieux, Jake Hanson and Dallas Warmack register as some of the best players at their position in the Pac-12. Oregon has allowed just 13 sacks this season, averages more than five yards per rush, and the top four runners have lost just 30 yards combined on negative runs.

As for Herbert, he’s completing 68% of his passes for 2,104 yards and has a remarkable 21-to-1 touchdown to interception ratio this season. Last week was the first time in 36 games that Herbert did not throw for a touchdown. Herbert threw for 280 yards and four touchdowns against Washington, but he had some trouble in home games against Cal and Colorado, as the Golden Bears held him to just 214 yards and are the only team to intercept him this season, while Colorado held him to 56.3% completions, though he did manage 261 yards and two touchdowns.

Herbert is physically impressive and can run if allowed to escape the pocket, which is something USC has had varying degress of success against this season.

Jaylon Redd and Johnny Johnson are the outside threats, though Oregon still does a good job of stretching the field horizontally and getting the ball quickly to playmakers. Johnson leads the team with 396 yards, while Redd leads the team with 35 receptions and seven touchdowns, despite just a 9.2-yard average.

This is a very balanced offense, and the only Pac-12 offense with four games of at least 200 yards passing and rushing in the same game. The Ducks have been without standout tight end Jacob Breeland for several games, but Oregon has a number of players who can chip in with a catch or carry here and there and really hurt a defense. Thirteen different Ducks have scored touchdowns this season, while only two receivers have more than 30 catches. Sure tackling and tackling in space will be huge keys for USC against this Oregon offense, as will the play of the interior defensive line. USC went up against a very good offensive line in Notre Dame, and the Fighting Irish imposed their will up front and created running lanes straight through the Trojans defense. The USC defense simply can’t allow the Oregon offensive linemen to pull and easily get into the second level, or open big holes along the line of scrimmage. The Ducks will test the Trojans on the perimeter, but USC has to make Oregon earn their running yards.

The Oregon secondary can get after the ball. The Ducks lead the nation with 14 interceptions, and that is not a fluke. Nickelback Jevon Holland is an absolute ballhawk. He leads the team with four interceptions, while safety Verone McKinley has three and seven other Ducks have one interception each.

Troy Dye is the defensive leader at linebacker and should be healthy enough to play against USC after he missed the Washington State game due to a broken thumb. Dye leads the team with 38 tackles and has chipped in a sack and an interception.

Oregon gets a pass rush from just about everywhere and will bring pressure from all angles. Colorado got to quarterback Kedon Slovis with a number of exotic pressures last Friday and Oregon will certainly bring some looks that Slovis and the USC offense haven’t seen on film.

Fifteen Oregon defenders have registered at least half a sack this season and 25 defenders have at least a half tackle for loss. Both of those statistics are led by true freshman linebacker Mase Funa, who has four sacks and 7.5 tackles for loss. This is an Oregon defense loaded with playmakers from California. Among the top nine tacklers on the team, seven are from the Golden State, and that doesn’t even include USC 2019 recruiting targets Funa, defensive end Kayvon Thibodeaux (2.5 sacks, four quarterback hits) and cornerback Mykael Wright (one interception, two pass breakups).

The Oregon defense ran off a truly remarkable streak earlier this year. The Ducks did not allow more than seven points in five-consecutive games, as they held Nevada, Montana, Stanford, Cal and Colorado to 6, 3, 6, 7 and 3 points respectively. But Washington and Washington State found some answers the past two weeks, as the Huskies piled up 31 points (125 rush yards, 289 passing) and the Cougars scored 35 (40 rush yards, 406 passing).

Kicker Camden Lewis missed his first three field goal attempts of the season, but is 5-for-5 since then and gained plenty of confidence with his game-winning kick to beat Washington State last week. Though, his long for the season is still just 40 yards.

Punter Blake Maimone is averaging nearly 44 yards per punt, with eight kicks of more than 50 yards and eight of his 32 punts downed inside the 20-yard line.

Travis Dye left the Washington State game due to injury, but could be back for USC. The Ducks haven’t been especially dangerous on kickoff returns this year, so it will be up to the Trojans to keep it that way. Oregon as a team averages fewer than 22 yards per return, with a long of 36 from Mykael Wright. With the ball in Holland’s hands after a turnover or on a punt, he is incredibly dangerous. He has an 81-yard punt return this year and is averaging more than 20 yards per return.