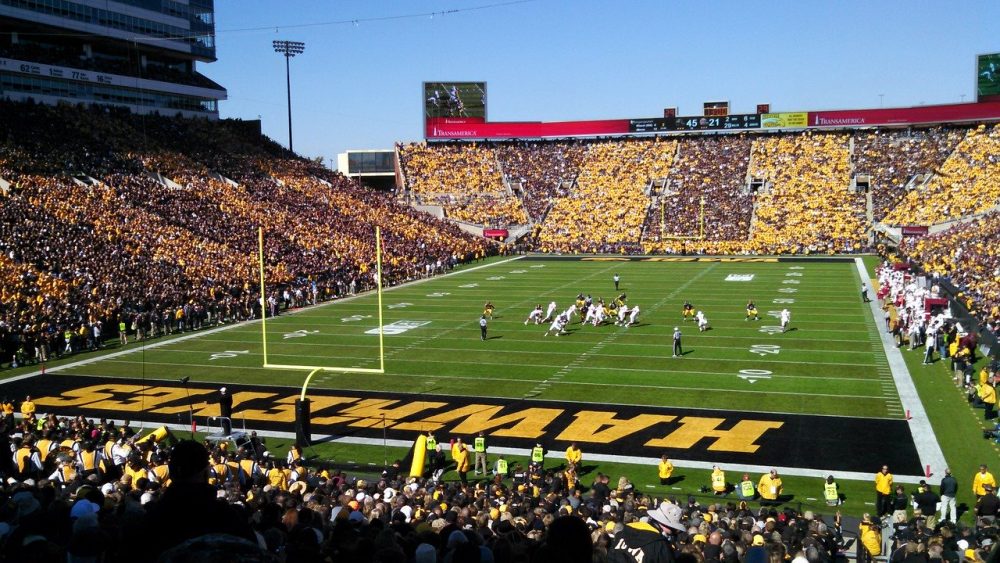 The USC Trojans look for their ninth win of the season on Friday evening, as they take on the No. 16 Iowa Hawkeyes in the San Diego County Credit Union Holiday Bowl.

This is not a dynamic Iowa offense, as the Hawkeyes ranked 98th overall in total offense (369.8 yards per game), 99th in scoring offense (23.8 points), 96th in rushing offense (139.5 yards) and 67th in passing offense (230.3 yards). It’s an offense that can be multiple, and throws the ball far more than typical Iowa offenses of the past.

Senior quarterback Nate Stanley will be starting his 39th consecutive game for Iowa and is second all-time for the Hawkeyes with 66 touchdown passes. He’s thrown for 2,738 yards (58.9% completions) and 14 touchdowns against seven interceptions this season, and run 68 times for 16 yards and a score. He doesn’t run for big plays, but he can pick up a handful of yards at a time. He’s rushed at least a couple times in just about every game this season and Michigan was the only team to completely contain him on the ground, sacking him eight times and not allowing a positive rush.

Iowa’s offensive playmakers are good, but the Hawkeyes don’t possess any threats that match up against some of the top skill players the Trojans have seen in the Pac-12 this season. Freshman tailback Tyler Goodson took over as the lead back late in the season and posted his lone 100-yard rushing game in the season final against Nebraska. He leads the team with 590 rushing yards and is tied with Mekhi Sargent with four rushing touchdowns. Sargent is the more physically imposing back, and finished the season with 543 yards. Both backs are very capable in the passing game. Goodson caught 21 passes for 146 yards, while Sargent had 14 grabs for 138 yards.

Brandon Smith might be the wide receiver to watch, as he is the biggest playmaker on the outside for the Hawkeyes, and could be healthy again for this game after suffering an injury against Purdue in mid-October. Despite playing in just seven games, Smith still finished third on the team with 407 receiving yards and tied for the team lead with four touchdown receptions.

Ihmir Smith-Marsette will get plenty of attention from the USC cornerbacks. He led the team with 676 receiving yards and had four touchdowns. Iowa also found a way to get him involved in the running game, as he carried nine times for 93 yards, including a 45-yard touchdown against Nebraska.

Tyrone Tracy got on the receiving end of a few big plays this season, including a 75-yard touchdown against Wisconsin and a 50-yard pass against Northwestern. Those two catches accounted for more than 20% of his season total.

Nico Ragaini led the team with 44 receptions, but averaged just 8.8 yards per catch, and finished fourth on the team with 385 yards.

Ultimately, Iowa wants to be a run-first (and run-second) team, but they simply weren’t able to do that this year. Right tackle Tristan Wirfs is a first-team All-American, and it’s a big, physical line across the board. But despite Iowa’s defense keeping them in every game this season, the Hawkeyes were never really able to establish a dominant ground game, and that will be very important trend for the Trojans to continue. Despite Iowa finishing the season averaging just 4 yards per carry on the ground with 14 touchdowns (USC averaged 4.1 yards and had 17 touchdowns), the Hawkeyes come into this game believing they have the ability to dominate USC at the line of scrimmage and impose their will in the running game. USC has to find a way to stop the run and force Iowa to beat them through the air.

Iowa has turned 18 defensive turnovers into just 32 points this season and the 27 points the Hawkeyes scored against Nebraska was the most points put up since a win against Middle Tennessee State in late September. It’s not an offense that should be able to pile up points against the Trojans, and it’ll be important for USC to limit big plays and keep getting the ball back for its offense.

Iowa is not a team that hurts itself with penalties or turnovers, as the Hawkeyes ranked fourth in the nation in penalty yards per game, with just 33.2, and fifth in total penalty yards. Iowa also turned the ball over just 12 times, good for first in the Big Ten and 12th in the nation.

Defensive end A.J. Epenesa is the player to watch for the Iowa defense. The Trojans will help offensive tackles Austin Jackson and Drew Richmond with Epenesa, but how well those two linemen hold up against one of the best defensive ends in the country will help dictate how well the USC offense functions on Friday. That makes Richmond’s injury situation even more interesting, as he’s dealing with a foot issue and might not be available. If he’s out Jalen McKenzie will slide outside to right tackle.

Epenesa is coming off a win against Nebraska in which he had 14 tackles and 4.5 tackles for loss. He had 2.5 sacks in a win against Minnesota. He was a consensus second-team All-American and finished the year with nine sacks. Of his 41 tackles, 13 have been for loss and he’s forced three fumbles this season.

Iowa’s number one priority on defense is to prevent explosive plays, so that will be a key to watch for on this side of the ball. Clearly, USC’s offense worked best when it could hit big plays down the field. If those aren’t there, can quarterback Kedon Slovis check it down enough to keep the ball moving and not force the ball downfield?

The Hawkeyes have been very good defensively this season. Iowa finished the regular season 12th in the nation in total defense (304.3 yards per game), 5th in scoring defense (13.2 points), 25th in rushing defense (120.1 yards) and 10th in passing yards allowed (184.2 yards). If USC is going to move the ball against this Iowa defense, Slovis and company will have to earn it.

Like many of the defenses that have given the Trojans fits this season, it’s a good bet that the Hawkeyes defenders are going to be in the right place at the right time. Iowa does not suffer broken coverages or give up big plays, so USC will need to either break that trend, or find a way to pick up tough yards on the ground or after the catch. While Iowa’s offense didn’t light up the scoreboard this season, the defense kept the Hawkeyes in every game. In their three losses, Iowa allowed just 10 points to Michigan, 17 to Penn State, and 24 to Wisconsin, losing all three by just 14 total points.

Duncan is a consensus All-American and a Lou Groza Award finalist. He connected on 29 field goals this season, which is just two short of the NCAA single-season record. Duncan was 29-for-34 this season, hitting 17-of-18 from 40 yards and in. He finished the season against Nebraska by hitting 48 and 49-yard field goals. While he is as consistent as they come, Duncan wasn’t asked to attempt anything longer than 49 yards this season.

Sleep-Dalton is familiar to USC fans, as he transferred to Iowa from Arizona State. He averaged 42.1 yards per punt this season. Iowa opponents averaged 6.6 yards per return, but 36 of the 73 yards came on one return.

Smith-Marsette averaged 25.8 yards per return this season, and took one back 95 yards for a touchdown.

Iowa had some success returning punts this season. Three Iowa returners averaged 9.4 yards per return, led by Ragaini, with nine returns for 96 yards.