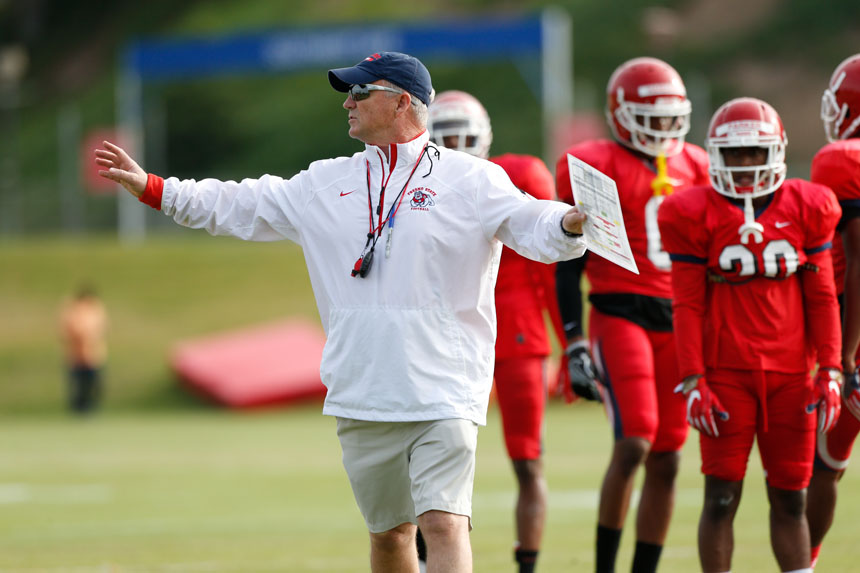 The USC Trojans will kick off the 2019 season by hosting the Fresno State Bulldogs on Saturday night at the Coliseum. While so much focus leading up to the season has been on USC and the changes the Trojans have undergone since a disastrous 5-7 season in 2018, it’s been easy to overlook the Bulldogs a bit as the first opponent up on what the Trojans hope is their redemption tour this season.

But Fresno State won’t be a pushover. As California’s best team in 2018, they’ll bring the nation’s 10th best record over the past two seasons with them into this game. That’s a direct result of head coach Jeff Tedford, who turned the Bulldogs around from a 1-11 team in 2016, to a program that will actually head to the Coliseum this weekend with quite a bit of confidence.

What the Bulldogs won’t bring, however, is last year’s senior-loaded lineup, which should benefit the Trojans greatly as they break in the Air Raid offense and a simplified defense.

Fresno State returns just three offensive starters from last season and will be breaking in a new quarterback, as 6-foot, 215-pound redshirt senior Jorge Reyna will be getting his first start. Getting pressure on Reyna early will be key for the Trojans, though it might not be simple, as the Bulldogs have been terrific when it comes to pass blocking over the past few years. Fresno State allowed just 12 sacks last season and 22 over the last two years. Fresno State has a couple of returning players up front, as junior Syrus Tuitele will man the right tackle position, and big-time NFL prospect Netane Muti will play either left guard or left tackle. Muti missed all of last season due to a ruptured Achilles tendon. The Bulldogs operate out of the shotgun, but are multiple in their formations — occasionally spreading the field with four wide receivers, utilizing two tight ends, lining the tight end up as an H-back, or going out of the pistol. But out of any formation, Muti will be the guy they look to get behind in the run game.

That run game will rely heavily on tailback Ronnie Rivers, who posted 286 all-purpose yards in the Bulldogs’ bowl game victory over Arizona State. The 5-foot-8, 183-pound Rivers rushed for 743 yards last season, with 1,192 all-purpose yards and a team-high 13 touchdowns. The Bulldogs have also shows that they aren’t shy about letting the quarterback keep the ball in the zone read, as former quarterback Marcus McMaryion was especially dangerous down by the goal line, with eight touchdowns and 294 rushing yards.

USC will bring a very inexperienced secondary into this game, and they’ll be met by a group of receivers who might have even less experience. Fresno State lost eight seniors from its 2018 wide receiver group. The top three returning pass catchers are a tight end and two running backs, as Darion Grimm, is the leading receiver, with 20 receptions for 212 yards and two touhdowns. While USC will rely on a few true freshman at receiver this season, Fresno State will certainly want to highlight true freshman Jalen Cropper, a huge recruiting win over several Pac-12 programs.

That aforementioned tight end is Jared Rice, a 6-foot-5, 243-pound senior who is easily the most accomplished offensive threat for the Bulldogs. The All-Mountain West Second-Team selection in 2018 was Fresno State’s second-leading receiver last year in receptions and receiving yards, with 55 for 664. He’ll test the middle of the USC defense throughout the game.

Ultimately, this offense shouldn’t pose a ton of problems for the Trojans in terms of scheme or personnel. USC has seen running attacks like this before and Fresno State will use some pre-snap movement, but nothing too exotic. And Fresno State breaking in nearly an entirely new passing game should give the USC secondary some confidence. But two years in a row we’ve seen the USC run defense gashed in the first game of the season, as the Trojans allowed 263 rushing yards to Western Michigan to open the 2017 season, and 308 rushing yards to UNLV in last year’s season opener. Gap control has been a buzzword for the USC defense line all offseason, and Saturday will go a long way toward showing whether improvement there is real.

Returning experience is a bit better for Fresno State on this side of the ball, as six starters return for the 2019 season. That group is headlined by Mykal Walker, who led the team in tackles for loss and tied for the second-most tackles. But Fresno State brings back plenty of experience up front, so Walker will move to middle linebacker this season, as the Bulldogs lost all three linebackers from last year’s team. In fact, all three Fresno State linebackers wound up there from different positions, as Justin Rice is a converted running back and Arron Mosby was a safety.

Fresno State’s defensive front will be an interesting test for the Trojans, as the Bulldogs didn’t get to the quarterback or create tackles for loss last season with any regularity, but they were stout at the line of scrimmage, finishing 30th in the country in rushing defense, 22nd in 3rd-down conversion percentage, third in scoring defense, and first in red zone defense.

Those numbers were also helped by a defensive backfield with a nose for the ball, as Fresno State recorded 19 interceptions (against just 15 passing touchdowns allowed). Holding onto the ball will be an absolute key against a defense that will want to get off to another strong start in that area.

USC’s veteran receivers will be challenged by a pair of preseason Thorpe Award nominees in cornerback Jaron Bryant and safety Juju Hughes, who intercepted four passes in 2018. Former USC commitment Wylan Free is a likely starter at safety, and he’ll certainly be excited to play against the Trojans in the Coliseum. One area where USC’s Air Raid offense could be especially dangerous is if the Trojans can use its fast tempo and high play count to get into the Bulldogs’ defensive back reserves, where Fresno State has a ton of freshmen and inexperience, as Fresno State has just three returning cornerbacks and four returning safeties from its 2018 roster.

Up front, this will be a really nice test for the USC offensive line, and one that could quickly determine the trajectory of the season. This is a talented Fresno State front four, but won’t compare to the likes of Utah, Washington, or Notre Dame to come. It remains to be seen how much the run game will truly feature for the Trojans, but getting it going at least somewhat on Saturday night will go a long way toward creating some confidence in and with the offensive line.

USC should have the advantage here, as they have better athletes across the board and what should be two of the best kickers in the country in punter Ben Griffiths and placekicker Chase McGrath. But Fresno State brings some talented kickers into this one as well, as punter Blake Cusick was named to the preseason Ray Guy Award watch list. Cusick averaged 42.2 yards per punt in 2018, with 11 of his 65 punts downed inside the 10-yard line, and held opponents to just 12 returns for a total of 42 yards.

The Bulldogs also bring back kicker Asa Fuller, but newcomer Cesar Silva won the job with a strong fall camp. Fuller will handle kickoffs and has 21 touchbacks in 2018.