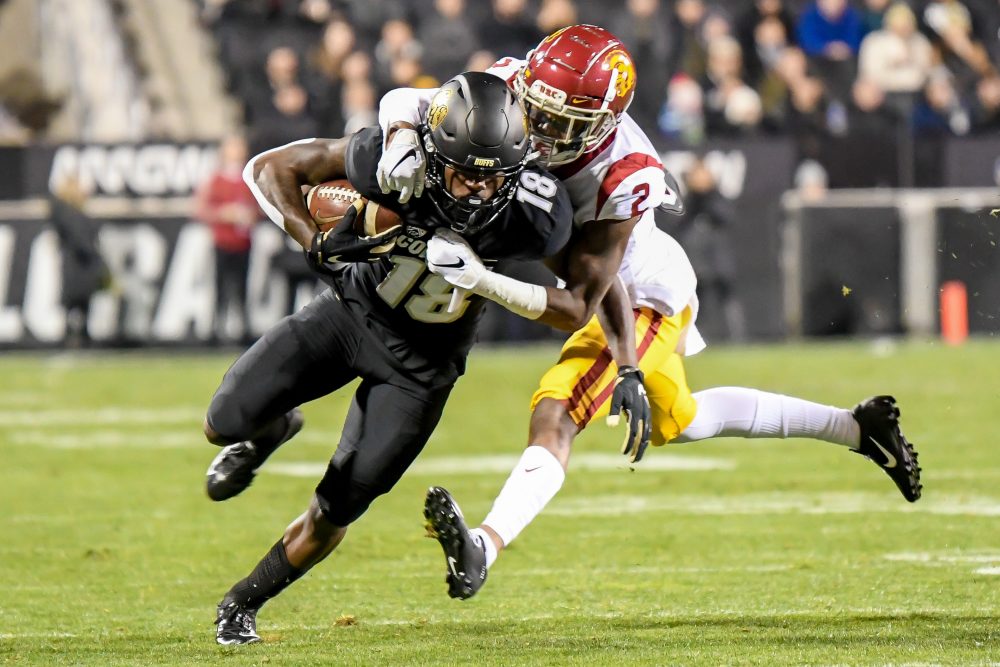 The Colorado Buffaloes are scheduled to visit the Coliseum this weekend in a matchup of undefeated teams for control of the Pac-12 South. The Buffs shot out to big leads in taking down UCLA and Stanford to open the season, then were off last week when their game against Arizona State was canceled.

Colorado has a new coach but it’s a familiar face to USC fans, as former UCLA head coach Karl Dorrell takes over the program. Defensive coordinator Tyson Summers returns as the defensive coordinator, and there is familiarity on offense, as Darrin Chiaverini moves into the coordinator role in his fifth year on staff, and Colorado brought in former Oregon State coordinator Danny Langsdorf as an assistant coach and passing game coordinator.

Colorado’s offense has been fairly explosive through two games as the Buffaloes are averaging 41.5 points and 478.5 yards per game. Both are top-20 marks in the nation.

Noyer has taken an interesting path to the starting quarterback spot for Colorado. Last fall, he was in competition at the position but asked to move to safety, where he played in four games. Noyer was set to graduate and transfer elsewhere, but elected to stay and move back into the quarterback competition. He won it and has been very good through two games. He’s completed 63% of his passes for 512 yards and three touchdowns against one interception.

His athleticism makes him a real threat on the ground, and that’s something the USC defense will absolutely need to account for after giving up big rushing days to Jayden Daniels of Arizona State and Grant Gunnell of Arizona. Noyer has run for 100 yards and is especially dangerous close to the goal line, as he has three rushing touchdowns this season.

Broussard has been one of the revelations of the early part of the season in the Pac-12, as he’s run for 308 yards and three touchdowns in two games. He’s also caught three passes and all eyes will need to be on him as Colorado will absolutely look to establish a run game against USC.

Mangham hasn’t gotten going this season as he has just 24 yards on 17 carries, but he does have two touchdowns.

Nixon hasn’t played this season while dealing with a hamstring injury, but he could return for this game and he would be a huge boost for the Colorado offense. He caught just three passes against USC last season, but two of them went for touchdowns. Dimitri Stanley has been the clear No. 1 target in the passing game this season, as he has 12 receptions the the No. 2 receiver — Maurice Bell — has just five.

Colorado loves to use the tight end, but injuries have decimated the position and the Buffs lost two players here against Stanford. Brady Russell was second on the team with five catches for 77 yards and a touchdown this season. Schmanski is a walk-on and was likely either the fourth or fifth option at tight end heading into the season. Colorado has already moved two defensive players to tight end this season to account for injuries at the position. This could be an interesting spot to watch as a major drop in production here could hurt both the passing and running game for Colorado.

This is a good line, but it’s a group the Trojans should be able to match up against. Fillip might turn into the standout, as he started as a true freshman last year and has been very good through two games. Lytle and Roddick are big, physical guards and Kutsch has been a senior anchor in the middle.

Colorado has gotten off to huge leads in its first two games this season but has needed to hold on as both UCLA and Stanford have been able to pass their way back into things and make both games close at the end. The Buffs have allowed an average of 37 points and 315 passing yards per game.

Mustafa Johnson is the player to watch up front, as he led Colorado with 8.5 sacks last season and already has one this year. Colorado, like USC, will vary its looks up front as the idea is a 3-4, but outside linebackers can come up to join the line and

Nate Landman is a tackling machine in the middle of this defense and most plays get funneled to him to clean up. He leads the team with 20 tackles — double what anybody else has. Wells has a sack this season and leads the team with 2.5 tackles for loss. Wells also has the only interception for Colorado.

Chris Miller looks as though he might make it back onto the field after missing the Stanford game. The STAR position is listed as a linebacker for Colorado, but it’s a hybrid safety/linebacker position and more of a defensive back in this defense. Against USC, Colorado is sure to employ an extra defensive back and likely will drop into zone coverage to make USC beat them with the run game or short passes.

Gonzalez has gotten the starting assignment as a true freshman and performed well. He’s second on the team with 10 tackles, but it wouldn’t be surprising to see USC attack him as they did with Utah true freshman cornerback Clark Phillips.

Isaiah Lewis could also get some time in the backfield and he leads the conference with 2.5 pass deflections per game.

Colorado hasn’t been that strong when it comes to special teams this season, and this is an area where USC could find an advantage.

Price took over the kicking duties for good when 33-year-old James Stefanou announced his retirement. Both Stefanou and Price had field goals blocked in the UCLA game. That was Price’s first miss, as he was 5-for-5 last season. His long this year is 45 yards and he has three touchbacks in nine kickoffs.

Watts is averaging just over 38 yards per punt and has forced three fair catches in nine attempts. Opponents have been able to return just two of those nine punts, totaling nine yards.

Stanley has 24 total punt return yards on four attempts, while Bell is averaging 23.75 yards on his kick returns. If K.D. Nixon is fully healthy, it wouldn’t be surprising to see him in the backfield. USC’s specialists have been terrific at limiting returns this season, as Utah’s biggest punt return came on a missed tackle as soon as the returner caught the ball. USC kicker Parker Lewis has been consistent in forcing touchbacks.