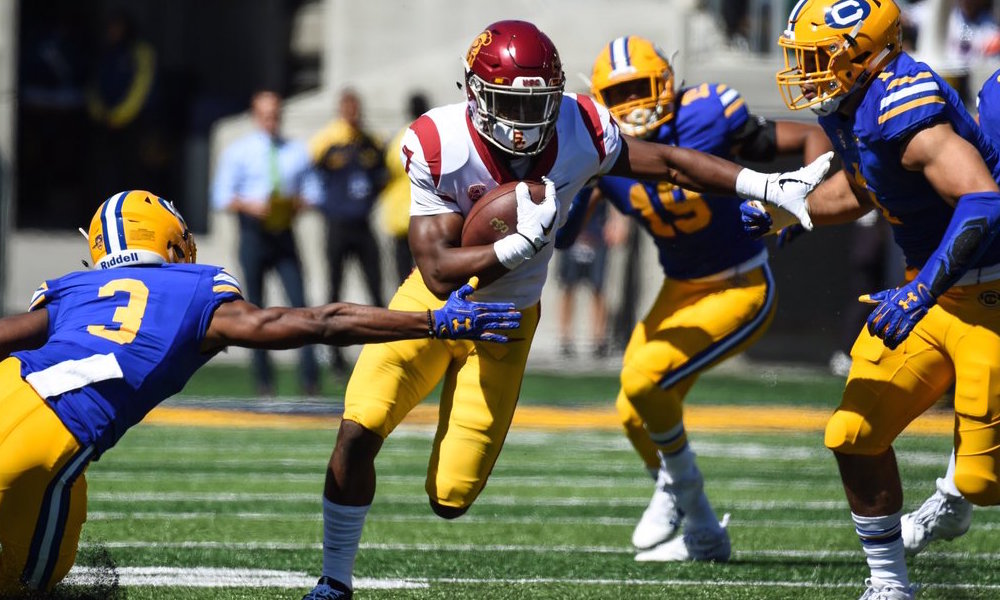 USC has another opportunity to finish the 2019 season on a high note as the Trojans travel north to take on the California Golden Bears. Cal snapped a 14-game losing streak against USC last season, in a game that featured one of the uglier second-halves for the Trojans, as they lost a 14-0 halftime lead in a 15-14 loss.

The biggest news for Cal this week came on Monday, when it was announced that quarterback Chase Garbers was cleared to return to the field. He’d been out since late September with a broken collarbone and Cal simply cratered with him on the sideline. After beating Washington and Ole Miss on the road on the way to a 4-0 start, the Golden Bears lost the game in which he was injured, then dropped the next three, including a 35-0 thrashing at Utah.

There’s no word yet if Garbers will start, but backup quarterback Devon Modster had his best game of the season last week against Washington State. It was the first time since Garbers was injured – and just the third time all season – that Cal threw for more than 200 yards and had more than one touchdown pass. Garbers is certainly the best option at quarterback if fully healthy, but no Cal quarterback has been great this season. Garbers was completing just under 60% of his passes, for 952 yards and eight touchdowns against two interceptions before he was injured in Game 5. Modster is at 51% completions, for 610 yards and five touchdowns against three interceptions in his five games. Both are capable on the ground in scrambling situations, as both have rushed for more than 120 yards this season.

USC head coach Clay Helton said Cal ran more 12 and 13 personnel packages against Washington State, and that could be the case against USC as well, as Cal goes big along the line of scrimmage to let running back Christopher Brown Jr. try to set the tone on the ground. USC did a terrific job against Arizona State tailback Eno Benjamin last week and the test will be similar this Saturday. Brown is very good at breaking tackles and he’s a big, physical runner. USC’s defensive line should match up well against a Cal offensive line that is paving the way for just 3.4 yards per rush and has allowed 35 sacks this season, but Brown can create yards after contact and USC defenders have to bring him down.

On the outside, Cal’s leading receiver would rank fifth on the USC roster in receptions. Jordan Duncan leads the way with just 18 receptions for 282 yards and two touchdowns. Brown is a significant threat out of the backfield, with 16 receptions and a team-high three scores. Sure tackling on the outside will be important, as Cal will throw quickly and look for yards after the catch. True freshman Makai Polk turned a quick screen into a 52-yard touchdown last week against Washington State.

The heart and soul of Cal’s defense is middle linebacker Evan Weaver. He leads the nation with 137 tackles, is tied for the team lead with 8.5 tackels for loss, has 2.5 sacks and leads the team with three forced fumbles. He is absolutely everywhere on the field, has tremendous instincts, and can be a force in the run game, against receivers after a reception, or reading and stepping into windows to intercept a pass. USC will need to know where is on every snap. Next to him, Kuony Deng feeds off the attention given to Weaver, as he ranks second on the team with 87 tackles and has 2.5 sacks of his own.

Like Arizona State, Cal hasn’t intercepted many passes this season – just four total – but the secondary can be considered a strength, with plenty of starters who hail from Southern California and will be fired up to go against the Trojans. Cal ranks fourth in the Pac-12 in passing defense, sixth in rushing defense, fifth in total defense, and third in scoring defense. Ultimately, the only real strength defensively for Cal has been keeping teams out of the endzone, as the 20.7 points per game allowed ranks 26th overall, while the yardage numbers are 56th (total yards), 51st (rushing yards) and 78th (passing yards). That will be something to watch on Saturday, as the Trojans can occasionally do well moving the ball but struggle to punch in touchdowns. Cal has allowed just nine passing touchdowns in nine games this season, which is first in the Pac-12. And only two teams (Arizona State and Utah) have scored more points against Cal than their average against other teams this season, as the Golden Bears held Oregon and Washington State to just 17 and 20 points, respectively.

Special teams will absolutely be an area to watch this season, as the Trojans again struggled in kickoff coverage against Arizona State, allowing multiple long returns before settling on squib kicking for the rest of the game. Cal ranks just seventh in the Pac-12 in kickoff return yards, and 10th (118th overall) in kickoff coverage. Cal has also struggled punting this season, averaging just 35.7 net yards per punt, good for 11th in the Pac-12 and 114th overall. But Cal has a dangerous return man in Ashtyn Davis, who has a kickoff return touchdown in his career. He’s averaging just 21.3 yards per return this season, but is a candidate to break one every time he touches the ball. He returned a punt 14 yards against Washington State, but Nikko Remigio has been good as a punt returner this season, picking up 101 yards on eight returns. For as poorly as USC has recovered kickoffs this season, it has been very good on punt coverage in terms of not allowing return yards.

Kicker Greg Thomas has struggled of late, missing four of his last five kicks, making him 9-for-14 on the year. He missed a 32 and 46-yarder in a close loss to Oregon, then missed a 39-yarder last week against Washington State. Cal has had some luck on the other side as well, as opponents began the season 7-for-7 on field goals, but are just 6-for-12 since the fourth game of the season.

Cal has used two punters this season and Steven Coutts has worked his way back from injury. Opponents have been able to return 18 punts for 151 yards against Cal, while Coutts is averaging 38.5 yards per punt, with fair catches forced on just 13 of his 30 punts.