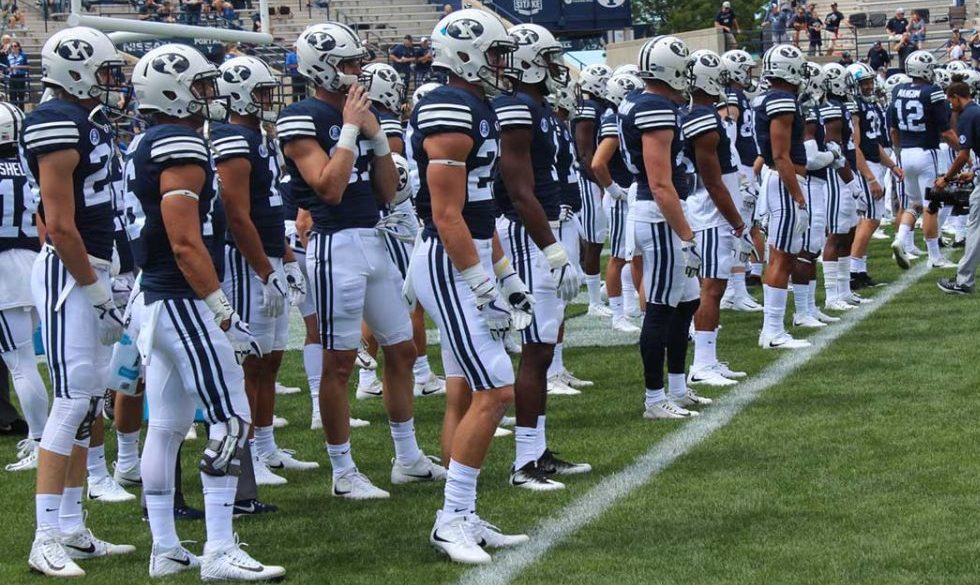 The No. 24 USC Trojans will take their 2-0 record on the road for the first time in the 2019 season, as they travel to take on the 1-1 BYU Cougars. BYU started its season with a 30-18 loss to Utah in the Holy War, but got off the mat this past weekend. Down by three with less than one minute remaining, BYU converted a third-and-six with a 64-yard pass, which set up a game-tying field goal with just one second remaining. The Cougars eventually won in double overtime with a five-yard touchdown run.

BYU will try to slow down a USC offense that caught fire against Stanford, with true freshman Kedon Slovis at quarterback and an array of talent at every skill position.

BYU rotates plenty of players defensively, as six positions have seen two different starters through two games of the 2019 season. The Cougars are capable of lining up in a 4-3 or 3-4 look, and the Trojans will likely see a lot of that 3-4 as they spread the field out with three or four wide receivers. The strength of the defense feels like it’s up front, with some big bodies along the defensive line and in the linebacker unit, but the numbers haven’t shown that this season, as BYU has allowed 252 rushing yards per game (128th in the country) and just .5 sacks per game (121st in the country). Last season, BYU’s defense ranked No. 27 overall in stopping the run, allowing just 130.1 yards per game, and holding four opponents below 100 yards on the ground. This year, the Cougars have allowed at least 160 yards rushing to both starting tailbacks they’ve faced, while neither Utah nor Tennessee ever really got things going through the air. BYU’s 141 passing yards allowed per game ranks 20th overall. Obviously that will be the matchup to watch on Saturday, as BYU’s previous opponents weren’t nearly as reliant on the passing game as USC is. The Trojans have the weapons in the passing game to stick to their script as a pass-first offense, but they’ve also shown that they can move the ball on the ground. And with the success other teams have had there, it will be interesting to see how often USC puts the ball in the hands of running backs Vavae Malepeai and Stephen Carr.

The linebackers are one of the strengths of the defense, as BYU is led by Kavika Fonua—17 tackles, one interceptio—and Ksaiah Kaufusi—14 tackles, three pass deflections. The Cougars’ lone sack on the year came from defensive back Chaz Ah You, and the Cougars have just one quarterback hit and nine tackles for loss this season.

Ultimately, this doesn’t look like a defense early in the season that is capable of stopping the USC offense if the Trojans hold onto the football and run their offense as efficiently as they did throughout the final three quarters of the Stanford game. There are plenty of veteran players scattered throughout the BYU defense, but there aren’t the athletes, or the overall team speed, to keep up with USC, if, and again, if, the Trojans are running their offense at a high level.

BYU runs a fairly balanced offense, with 63 pass attempts compared to 52 runs this season, though the Cougars have mostly been playing from behind. The offense runs through quarterback Zach Wilson, a good athlete who could give the USC defense problems if allowed to move inside and outside the pocket. The Trojans did a much better job of finding the quarterback and not allowing him to escape against Stanford than they did against Fresno State, and that will again be a key this weekend.

Overall, Wilson is 40-of-62 for 440 yards with one touchdown against two interceptions this season, and has rushed 14 times for 37 yards—with negative 21 yards on five sacks. His top target this season has been wide receiver Micah Simon—10 receptions for 162 yards, including the game-saving 64-yard reception to help force overtime against Tennessee—though tight end Matt Bushman—eight receptions for 102 yards—is a weapon as well.

But BYU went to running back Ty’Son Williams—a graduate transfer from South Carolina—often against Tennessee, after he had just seven carries in the season-opener against Utah. Against the Vols, Williams rushed 17 times for 92 yards and two touchdowns, incuding the game-winner in double overtime. He is averaging 5.7 yards per carry this season and is a physical back who can run through tackles and move the pile. He won’t be the best back that USC faces this year, but he’s a good one and the Trojans will need to tackle well against him.

In the passing game, receivers Aleva Hifo—six receptions for 55 yards—and Gunner Romney—five catches, 48 yards—have chipped in as well. And Hifo can be dangerous in the run game as well, as BYU is capable of running some misdirection with him out of the slot—something we saw Fresno State and Stanford both utilize against USC.

Overall, BYU has struggled to get much going on offense this season. They are a perfect 8-for-8 in redzone scoring—four touchdowns, four field goals—but the Cougars rank outside the top 75 teams in total offense, passing offense, passing efficiency, rushing offense, scoring offense, total first down, sacks allowed, yards per completion and time of possession.

Jake Oldroyd is a terrific kicker. He’s 5-for-5 this season and is kicking with a lot of confidence right now. He hit a game-tying, 33-yard field goal against Tennessee with one second left last weekend. As a punter, Oldroyd is averaging nearly 50 yards per punt on seven attempts. Three of his punts have traveled more than 50 yards.

BYU is allowing just 6.67 yards per kickoff return this season—thanks to a zero-yard return from Utah—though they’re giving up a little more than 10 yards per punt return. Kickoff specialist Skyler Southam has four touchbacks on nine kickoffs.

The return units haven’t done much of anything for BYU this season. They have just two kick returns for 32 yards, and haven’t recorded a punt return yard to this point.