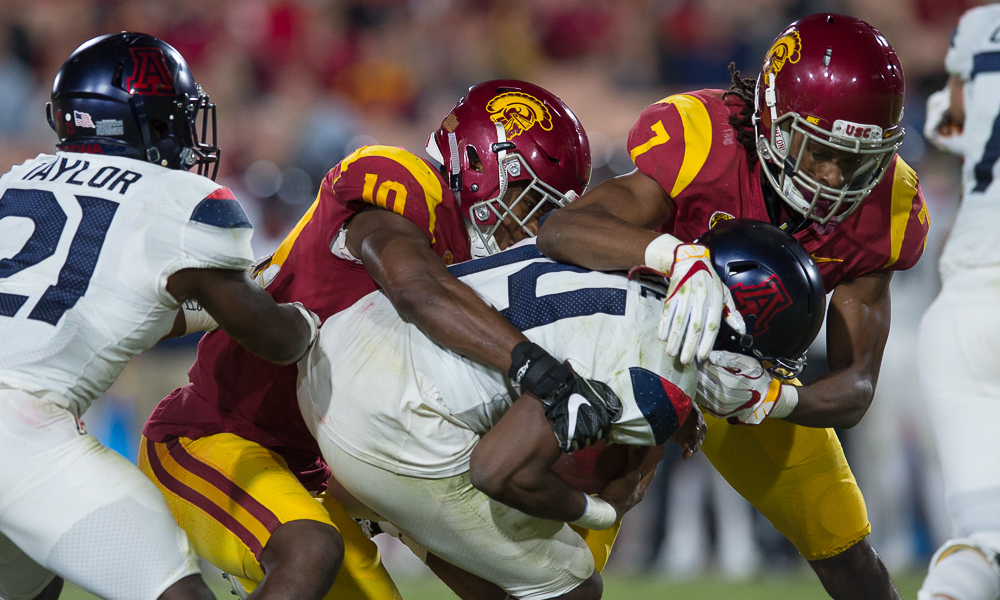 A massive shakeup is coming to the Pac-12 South this weekend, as the four 2-1 teams in the division square off. If Utah can knock off Arizona State at home, the Trojans will have an opportunity to take sole possession of first place in the South with a win against Arizona, by virtue of owning the tiebreaker against Utah. But whatever the outcome of the earlier game, every Pac-12 matchup has taken on must-win significance for USC

Arizona brings a 4-2 record with them to Los Angeles, thanks to a typically-Pac-12-opening-week loss to Hawaii, conference wins against Colorado and UCLA, and blowout loss against Washington last weekend.

Arizona’s offense is the Khalil Tate show, as the Wildcats quarterback is the arguably the most talented player in the conference when he is healthy and playing well. Arizona is No. 2 in the Pac-12 in total yards (509.3), rushing yards (209.3) and passing yards (300) per game.

Though it should be noted that Wildcats haven’t played many good defenses this season, they are still putting up impressive numbers on offense, across the board. Arizona has three games with more than 350 yards passing, and two games this season with more than 300 yards on the ground (including a rushing performance against Northern Arizona of 431 yards and four touchdowns).

Tate is the guy who makes it all go. Arizona runs a devastating RPO game, where Tate can hand the ball off, keep in on the option, or pass quickly to a wide receiver. He’s also dangerous in the dropback game because of his big arm and his ability to pull the ball down and scramble whenever he wants to. Notre Dame quarterback Ian Book was able to pick up a couple of huge first downs with his legs due to USC defenders getting out of their rush lanes. If that happens against Tate, he has the ability to take it for a touchdown, rather than just a first down. His strong suit is not sitting in the pocket and delivering strikes down the field, so it will be up to the USC defensive front to keep his running ability in check, and potentially up to a group of true freshmen injury replacements at cornerback to come up with big plays in the passing game.

Despite missing the game against UCLA, Tate is completing nearly 65% of his passes for 1,272 yards and 10 touchdowns against six interceptions. He’s rushed 44 times for 233 yards, with an 84-yard touchdown.

But Tate isn’t alone when it comes to the Arizona running game. There are four backs for the Wildcats who can cause problems, and all are rushing for at least 5.6 yards per carry this season. JJ Taylor is the lead back, with 301 yards and three touchdowns. But Gary Brightwell (286 yards and four touchdowns), Darrius Smith (186 yards and a touchdown) and Nathan Tilford (146 yards and four touchdowns) are all capable runners. USC is allowing 197.2 yards per game on the ground and nearly five yards per carry. If Arizona hits those numbers, the Wildcats will be tough to beat.

Arizona spreads the ball around through the air, as eight players have at least 10 receptions this season. Brian Casteel leads the way with 22 receptions, but his 8.1 yards per catch is by far the lowest number of the Arizona receivers. Cedric Peterson has been the big-play guy for Arizona this season, with 14 receptions for 270 yards, including a 75-yard touchdown grab. Jamarye Joiner is a converted quarterback who has the kind of athleticism that Arizona head coach Kevin Sumlin simply needed to get on the field. He’s a guy who is definitely one to watch, as the Trojans have given up chunks of yards against trick plays and misdirection this year.

Arizona’s offensive line is a significant step down from the one USC just faced in South Bend, but the Wildcats can create angles in the run game that give Tate and their stable of backs enough room to operate. Arizona has allowed 11 sacks this season. One number to watch on Saturday is Arizona’s third down percentage. The Wildcats have been terrific there, registering as one of the top teams in the nation in converting 49% of their third downs. Arizona is also 6-for-6 on fourth down.

As good as Arizona has been offensively this season is as bad as they’ve been defensively. The Wildcats have allowed at least 40 points in half their games this season and rank 10th in the Pac-12 in total defense per game (473.2 yards), 11th in passing defense (320.7 yards) and 6th in rushing defense (152.5 yards).

After spending years in a pure three-man front, Arizona has tried mixing things up there, lining more players up along the line of scrimmage, and sending extra rushers. This will again be something to watch against the Trojans, as BYU, Washington and Notre Dame were all content for the most part to drop eight players, with two safety deeper than normal to take away USC’s big-play ability.

The numbers would indicate that USC could throw the ball with success against this Arizona defense. But Clay Helton and Graham Harrell have noted that what teams show on tape haven’t been what they’ve played defensively against USC, so the Trojans’ ability to adjust to whatever Arizona does early in the game will be important. If Arizona dares the Trojans to run the ball early and often, can USC have enough success with it to control and eventually win the game?

Arizona’s defensive strength lies in its linebackers, with Tony Fields, Colin Schooler and Anthony Pandy. They are the top three tackles on the team, and both Schooler and Pandy have racked up tackles for loss this season. USC offensive linemen have to be away of linebacker coming on blitzes in the passing game, but also have to do a good job getting to the second level and getting their hands on players who can come up and cut the running game off at the line of scrimmage. Fields and Pandy both have interceptions this season. Arizona has just 26 tackles for loss this season (compared to 37 for the Trojans) and just five sacks (to USC’s 14). If there’s a sack to be had for Arizona, it’ll likely be defensive end Jalen Harris, who has 3.5 and is tied with Schooler for the team lead with 5.5 tackles for loss.

The secondary is opportunistic, as Lorenzo Burns and Jace Whittaker each have three interceptions this season (to go with six and four pass deflections, respectively).

Havrisik has been very good this season, hitting 5-of-7 field goals and 26-of-27 extra points. He’s missed from 34 and 51, but he has made two field goals of 50 yards or more this season. He’s also forced 32 touchbacks on 38 kickoffs, so he has the ability to shut down the USC return game.

Arizona ranks 11th in the Pac-12 in net punting, as Aragon averages just 39.8 yards per punt.

There is some talent in the group Arizona sends deep to return kickoffs, but it hasn’t clicked so far this season, as Arizona is averaging just 19.3 yards per return. Joiner has the long on the season, with a 44-yard return, but none of the other have anything more than 23 yards.

Casteel has only had three opportunities this season, and 42 of his 44 total yards came on one return. USC had some troubles getting balls downed deep inside Notre Dame territory last weekend, but have only allowed four returns all season.