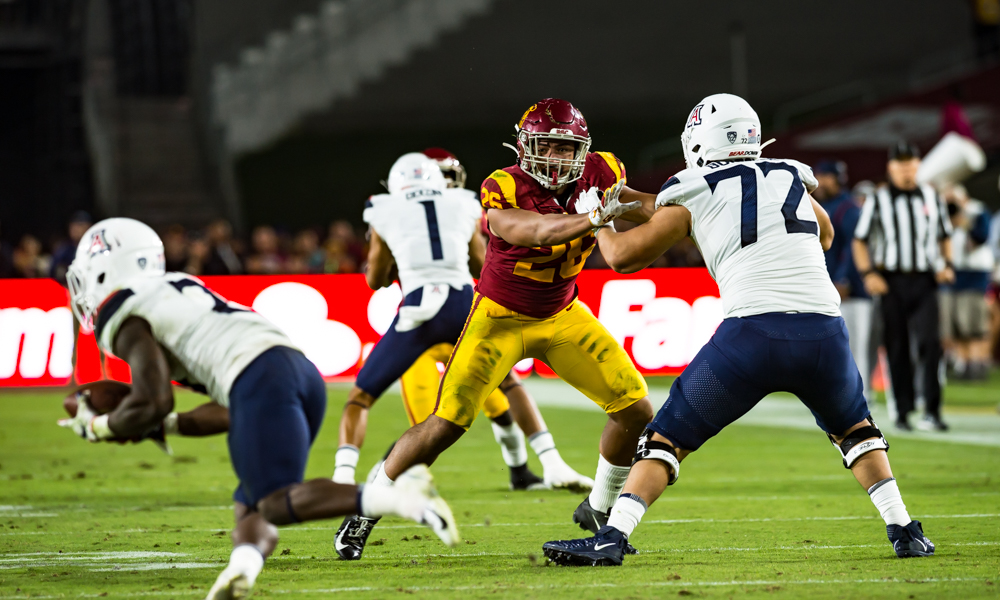 USC makes its first road trip of the season this weekend, as the Trojans travel to Tucson to take on the Arizona Wildcats. USC will be looking for its eighth win in a row over Arizona, as the Wildcats are set to play their first game of the 2019 season and first game under a revamped defensive staff.

Arizona will bring a fast-paced, RPO-based attack against USC, though the quarterback is not nearly the danger on the ground that Arizona State’s Jayden Daniels was. USC defensive coordinator Todd Orlando said preparing for Arizona is similar to preparing for a triple-option team in how sound the Trojans will need to be with assignments against this RPO scheme.

Arizona lost longtime starting quarterback Khalil Tate in the offseason, but Grant Gunnell got some playing time last year, so he isn’t entirely new to the role. He’s nowhere near the running threat that Tate was, but he’s a much more accurate passer. He completed more than 65% of his 155 passing attempts last season, on his way to nine touchdowns against just one interception. His lone interception came against USC in mop-up duty last season, when he completed 16 of 26 passes for 196 yards and two touchdowns.

Arizona lost more than 1,100 rushing yards from last year’s team with the departures of Tate and running back J.J. Taylor, but Gary Brightwell was already starting to make some noise. He rushed for 390 yards and a 5.9 yards per carry average to go with five touchdowns. He also caught four passes for 59 yards and another score.

Joiner began his Arizona career as a quarterback but moved to receiver last fall and was hitting his stride toward the end of the season, as he caught seven passes for 140 yards and two touchdowns against Arizona State. Casteel led the Wildcats with 45 receptions last season but averaged just 8.8 yards per catch. This group didn’t get the same kind of recruiting hype Arizona State’s true freshmen receivers got, but it’s a much more veteran group and will likely provide a bigger challenge for the USC defensive backs. Arizona often spreads the field with four receivers, so USC will see a lot of this group on Saturday.

Wolma caught just five passes for 62 yards and one touchdown last season, so he won’t be expected to be a huge part of the offense this year.

Arizona hasn’t played a game this season, so there are still some questions about the makeup of the offensive line, as there are co-starters listed at right guard. Donovan Laie is the best player up front and Arizona almost lost him as he entered the transfer portal and then elected to return to the Wildcats. The left side of the line is the strong side. USC probably lost a couple of sacks last weekend due to the athletic ability of ASU’s Jayden Daniels, but the Trojans still finished with just one sack. They’ll need to get more pressure on Gunnell this week and while this is a pretty veteran line, it’s one the USC defensive front should be able to match up with.

This is a group that has some huge holes to replace due to transfers. Arizona lost linebackers Colin Schooler and Tony Fields and safety Scottie Young. Those were the Wildcats’ Nos. 1, 2 and 4 tacklers last season

Arizona desperately needed help along the defensive front and were able to land two grad transfers in Aaron Blackwell and Roy Lopez, who immediately joined the starting unit. Blackwell came over from New Mexico, while Lopez came from New Mexico State. Barrs is a real talent, but USC has to find a way to establish a run game against this group.

Jalen Harris is making the same kind of transition USC’s Drake Jackson is doing, as he’s now a standup outside linebacker, having moved from hand-in-the-ground defensive end. He’s still the pass rusher to watch for Arizona. USC will have a similar sight this weekend, as another standout No. 8 linebacker will set the tone for the Wildcats’ defense. Anthony Pandy is a really good player and was supposed to be one of a group of really talented players at the position. But Arizona lost two veterans as grad transfers and will now turn to a couple of freshmen to start for a very undermanned linebacker group.

Pandy finished last season No. 3 on the team with 66 tackles, and had two sacks and an interception. Harris led the team with four sacks.

Burns led the team with four interceptions last season and he’s the standout in the back end. This is a group USC’s passing attack should be able to find success against, though it did reasonably well against Kedon Slovis last season. Slovis threw for just 232 yards on 19-of-28 passing against the Wildcats, though Arizona had few answers for USC’s running game and then-true freshman Kenan Christon, who got into the Arizona secondary a couple times on his eight carries for 103 yards and two scores.

Havrisik has a big leg as his career long is from 57 yards. But he’s just 19 for 32 on field goal attempts in his career and missed both kids against USC last season. He was 10 for 17 last season and missed two extra points as well. His big leg works well on kickoffs, as he forced 48 touchbacks on 62 kickoffs in 2019.

Ostendorp takes over as the starting punter this season, though he handled 21 attempts last season. He averaged nearly 40 yards per punt in 2019, with five traveling more than 50 yards and five resulting in fair catches. Opponents found some success returning punts against Arizona last year, as they averaged eight yards per return.

J.J. Taylor was the lead kickoff returner last season, but Cunningham averaged 19.7 yards on his seven attempts. Gary Brightwell and Jamarye Joiner could also get looks on kickoffs. As a team, Arizona averaged just 21.1 yards per kick return and 6.4 yards per punt return in 2019.