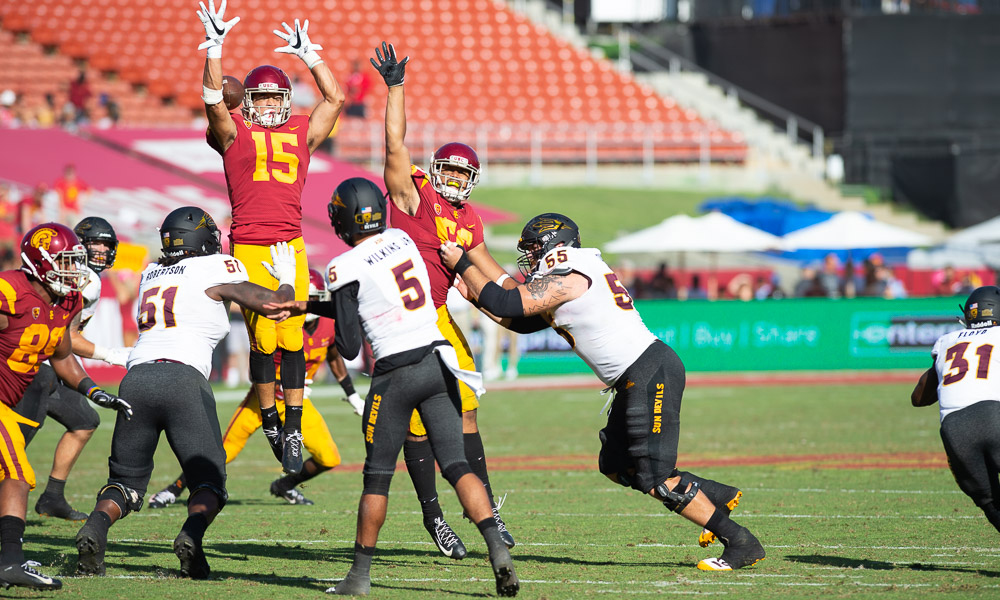 If the USC Trojans are going to avoid another late-season slide, they’ll need to generate momentum on the road this weekend, as they travel to Tempe to take on the Arizona State Sun Devils.

Arizona State is similar to USC at the quarterback position, as it appears the Sun Devils have their signal-caller of the present and future in true freshman Jayden Daniels. He has been terrific at times, but there have also been struggles typical of a true freshman at that position. Daniels has thrown just two interceptions this season, but is only completing 60% of his passes and was dominated by a very good Utah defense, which held him to 4-of-18 passing for 25 yards and an interception. He’s coming off a good game against UCLA, where he threw for 267 yards and three touchdowns, albeit in a losing effort. Daniels is also an opportunistic runner. He’s rushed at least five times and gained positive yardage in every game this season, with 273 yards and three touchdowns. Daniels can be extremely dangerous with his legs on third down, as he’s rushed for 11 first downs in that situation this season, and the Trojans have been burned at times by mobile quarterbacks.

The offensive line starts two true freshmen, in Henderson and West, and it’s a line that does not rate as one of the Pac-12’s best. The Sun Devils are allowing 2.5 sacks per game, which ranks 93rd overall, and 5.6 tackles for loss per game, which is 8th in the Pac-12. Neither the running nor passing game have been prolific for Arizona State, as it ranks ninth in the conference in both statistics, despite a talented quarterback and one of the best tailbacks in the country.

That tailback is Eno Benjamin, who forces missed tackles about as well as any back in the nation. But he’s been held in check at points this season, despite four 100-yard performances, including three-consecutive against Cal, Washington State and Utah. At UCLA, Benjamin rushed 13 times for 46 yards, and Michigan State was able to hold him to just 38 yards on 11 carries. Benjamin is also a threat out of the backfield, having caught at least two passes in all but one game this season.

On the outside, Arizona State lives by big plays made by receivers Brandon Aiyuk and Frank Darby. Aiyuk is one of the fastest players in the conference and averages 19.5 yards per reception. He ranks second in the nation in yards after the catch and has touchdown catches of 33, 40, 53, 77 and 86 yards. Darby is not far behind Aiyuk, as he averages 17.8 yards per reception. Tackling in the secondary will be an absolute key to the game against these receivers, as they can catch quick passes and shake loose for big gains.

One area where Arizona State has been very good this season is in the turnover department. Daniels has thrown just two interceptions (one was a end-of-half hail mary attempt) and the Sun Devils have committed just seven turnovers as a team. They rank second in the conference and tenth nationally in turnover margin.

While the Arizona State offense has been fairly middling this season, the defense has been very good. The Sun Devils are third in the conference in total yards allowed, third in rushing defense, fourth in scoring defense and sixth in passing defense. After playing the conference’s most opportunistic secondary in Oregon, the Trojans should be a little safer with the ball in the air against Arizona State, as the Sun Devils have just three interceptions this season. The Arizona State defense is filled with solid tacklers who do not allow busts in the coverage or much in terms of yards after contact. They are one of just four teams to not allow a play of 50 yards or more this season, and the Sun Devils have allowed just 22 rushes go for more than 10 yards this season — good for 8th in the country.

The passing yards allowed numbers are skewed a bit by games against Colorado (337 yards) and Washington State (466), so the Trojans will still be challenged there, as the Sun Devils haven’t allowed another team to throw for more than 300 yards against them this season. Arizona State had also been incredibly stout against the run — not allowed a team to run for more than 138 yards this season — until Utah went for 151 and then UCLA got them for 217 yards on 57 carries.

Linebacker Darien Butler leads the team with 55 tackles, while Lole, Kearse-Thomas and Lea share the team lead with 2.5 sacks each. This is a defense that will rip at the ball, so ball security will be extremely important for true freshman quarterback Kedon Slovis, true freshman running back Kenan Christon, and any USC receiver fighting for extra yards after the catch. Eleven Arizona State players have forced fumbles this season, led by Aashari Crosswell with three. The Sun Devils have also recovered 11 fumbles.

Certainly more attention will be paid here this week after the Trojans allowed a 100-yard backbreaking return to Oregon this past weekend. The Sun Devils put Brandon Aiyuk deep to return both kicks and punts and his speed and tackle-breaking ability makes him a threat every time he has the ball in his hands. While he hasn’t taken a kick all the way back yet, he’s been close. Aiyuk is averaging more than 12 yards per punt return, with a long of 38. On kickoffs, he’s averaging nearly 26 yards, with a long of 35.

Overall, Arizona State allows fewer than 21 yards per kickoff return, though opponents have had a few opportunities to return punts this season.

Crisitian Zendejas is a solid kicker for the Sun Devils, having made 13-of-17 kicks this season. But he’s just 4-of-7 from 40 yards or further this season, and after starting the year making his first eight kicks, he’s just 5-for-9 in his last five games.

This is a very good kickoff coverage unit for Arizona State, as the Sun Devils have just eight touchbacks on 41 kickoffs this season, but opponents average just 20.8 yards per return on 25 attempts.