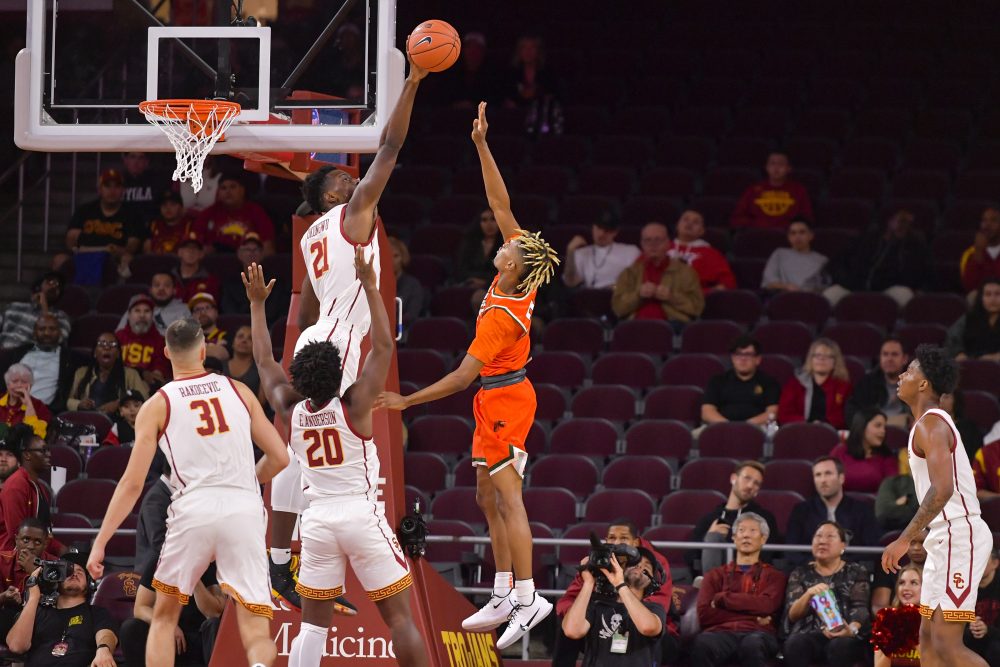 In a tale of two halves, the worst of halves was followed by the best of halves. The Trojans broke open a 1 point game after halftime, and won going away by 29. Let’s start with a few preliminaries – the A&M Rattlers are who we thought they were. They are not a very good basketball team. The SC freshmen class all contributed, and in many respects carried the team. But that is an over simplification, and needs more explanation, which I’ll provide below.

Before getting into the game details, I want to make a plea on behalf of this tram and staff. Trojan fans, you must come out to Galen and support this team!  A true home court advantage matters, and this is a fun and exciting team to watch. Drown your football sorrows with basketball cheers. There was a good student turnout, but the entire crowd including the students needs to get more involved in the game to help the team. This year can be the start of something big for Trojan basketball.

Now, I’ll get off my soapbox and provide some comments about the game. And where else to start but with the Big O. In 25 minutes, Okyeka Okongwu had 20 points on 9 for 12 shooting, 13 rebounds and 8 blocks. The 8 blocks tied the SC single game record. He has an incredible even demeanor. When told after the game that he had tied the record, his expression didn’t change, not even a grin. I spoke to him briefly before the game, and it is obvious that he is one very focused young man.

Other than O and Elijah Weaver, the Trojans had a miserable first half. As a team, they were 11-33 from the field, 1-9 from the free throw line (after forfeiting one made shot for stepping into the lane too early), and 1-8 from three. The defense was good all night. Troy held A&M to 32% from the field for the game, and held top returning scorer MJ Randolph to one basket, which came with 1:21 left in the game. After the game, Coach Enfield said he was very pleased with the defensive intensity, especially in the second half.

But Andy had no explanation for the poor first half, commenting after the game that the Trojans had the same issue in the Villanova and Santa Clara exhibitions. This will be something the staff will address over the next few days before the game Friday night against the University of Portland.

The four other freshmen all contributed. After having no points and one rebound in the first half, Isaiah Mobley was a different player in the second half. He turned up his intensity, finishing with 17 points on 5-7 from the field , including hitting his only three point shot, along with seven rebounds. Max Agbonkpolo didn’t play in the first half, but in the second half he shot 3-3 from the field including one from three, and 3-3 from the line for 10 points in less than 8 minutes on the floor. And freshmen point guards Ethan Anderson and Kyle Sturdivant finished with 11 assists and only two turnovers between then, a great ratio for any pair of lead guards. As a team, the Trojans finished at 45.5 % from the field making 19 of 33 shots after halftime.

But all was not rosy. The free throw shooting picked up greatly in the second half, but as a team the Trojans shot only 61% for the game. And the most troubling stats were the 3-17 performance from behind the three point line and the 17 turnovers. The Trojans must shoot much better from the outside in order to get space for O to roam underneath. Isaiah played mostly on the perimeter in the first half, and was guarded by much smaller guards, but could not get untracked. In the second half, he played inside more, and his athleticism and energy produced at a very high level.

I continue to be impressed by Elijah’s improvement over last season. He seems quicker and much more confident in every phase of the game. I expect a big season from him.

Andy said after the game that they will continue to play all 11 players over the next several games at least, and might have different lineups depending on matchups and how the players are performing at practice. Jonah Mathews did not start due to a minor team issue, and Elijah started at the shooting guard spot and Ethan started at the point.

The team played a man defense for all but a few possessions, and pressed a few times and got at least one turnover from the press. Andy said the team needs to do a better job converting on fast break opportunities. He also said that Max needs to work on his physicality, but praised his effort.

Drake London was in a warmup suit and was on the bench. Before the game, Andy said they would see how quickly Drake could learn the offense and defense and get into basketball shape after football season ends. He also praised Drake’s athleticism which he said has been on display on the football field. George Raveling was at the game and sat behind the A&M bench. He told me that the A&M coach, Robert McCullum, is a friend.

And, finally, I was told by multiple sources that the expectation is that the AD position will be finalized on Thursday, with an announcement on Thursday or Friday.