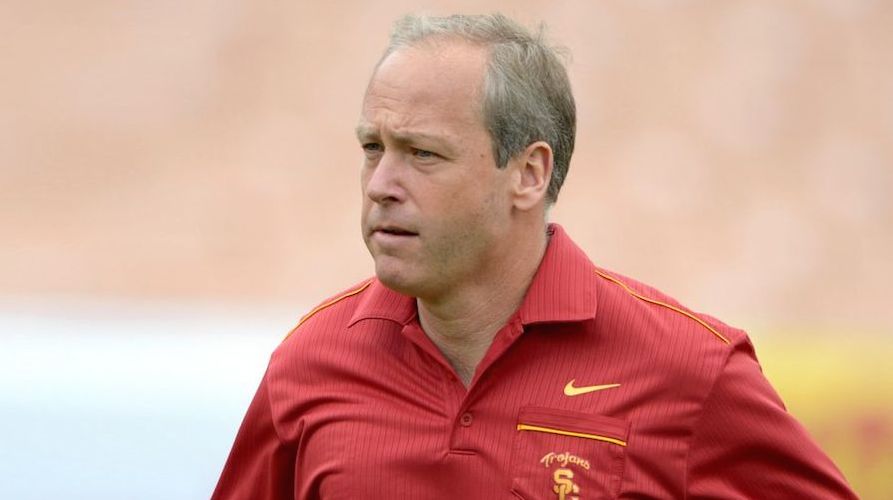 The Not So Obvious: The O/NSO knows nobody within earshot that doesn’t like Baxter and Pendergast, both as coaches and people. Each is easy going in public, respected, and very unassuming. It’s well documented how Pendergast took a porous Trojans defense and turned it into the Pac-12’s best in 2013. As for Baxter, his knowledge and performance of special teams is considered amongst the best in the country.

The Obvious: Many observers were stunned and disappointed after the 2013 season when former Trojans head coach Steve Sarkisian elected to let Clancy Pendergast go to in favor of Justin Wilcox and also giving John Baxter the pink slip, as well.

The Not So Obvious: Hindsight is always 20/20, and as we know now, Justin Wilcox was not a good fit, and the Trojans overall special teams performance slipped, as well. There will further evidence of the aforementioned in 2016 if Pendergast resurrects a lackluster Trojans defense and returns it to the top or near top of the Pac-12 defensive statistics next season. As for Baxter, we all know what the Trojans did under his guidance, especially in terms of blocked kicks (24) from 2010-13 and ranking Top 15 in the nation every season.

The Obvious: Having filled the DC position and special teams, Trojans head coach Clay Helton will now focus – along with Clancy Pendergast – on coaching positions of the defensive line and secondary, respectively.

The Not So Obvious: The two defensive position openings are of critical importance. Would Helton and Pendergast elect to elevate grad assistant Kenechi Udeze, a promising defensive line coach, to fulltime status? After all, the former All-American and No. 1 draft pick wants to coach, apparently did a good job in Holiday Bowl practices, was received well by the players, and was tutored by Ed Orgeron.

As for the secondary coaching position, if Pendergast doesn’t assume the responsibility, might former Trojans All-America Tim McDonald Sr., currently a defensive backs coach with the Buffalo Bills, be in the mix? We should find out on both positions soon because recruiting season reopens next week.

The Obvious: Tyson Helton has been named running back coach/passing game coordinator for the 2016 Trojans.

The Not So Obvious: Helton has one year of experience as a running back coach, having tutored backs at Alabama-Birmingham in 2012. He also played quarterback at Houston (1996-99), after starring at Clements High in Sugar Land (Tex.). His father, Kim, was the head coach at Houston during Tyson’s playing days. Nothing like brotherly love when it comes to hiring.

The Not So Obvious: While under Callaway’s watch, six different Georgia offensive linemen earned All-Southeastern Conference honors on 10 occasions. One of them — Max Jean-Gilles — received All-America honors in 2005.

The Not So Obvious: A native of Macon, Georgia, and a member of the Macon Sports Hall of Fame, the O/NSO finds one of the more intriguing aspects of Callaway is that he played numerous positions during his Crimson Tide playing days (1974-77) under legendary coach Bear Bryant. Callaway, 60, was a guard, tackle, defensive end, nose guard, and linebacker at various times at Alabama.

The Obvious: Neil Callaway, who will bring that Alabama drawl to Los Angeles, is listed on the 1977 Alabama roster as an offensive tackle (6-0, 215).

The Not So Obvious: The Trojans played Alabama in 1977 and Neil Callaway was on the Tide team that defeated the Trojans 21-20 before 63,140 at the Coliseum. Of note, Callaway’s teammates on that 1977 Alabama team included the likes of DL Mary Lyons, WR Ozzie Newsome, LB Barry Krauss, and QB Jeff Rutledge. Of note, Callaway was named the Frank Thomas Award winner in 1977 as the Alabama’s most outstanding athlete.

The Obvious: A number of Trojans commits and possible commits will be on display on Saturday (10:00 a.m. PT/NBC) in the annual U.S. Army All-America Game from the Alamodome in San Antonio, Texas.

The Obvious: The Trojans are hoping to sign standout Concord (Calif.) De La Salle tight end/defensive lineman Devin Asiasi for the Class of 2016.

The Not So Obvious: If you listen to Asiasi in interviews from the U.S. Army All-America Game in San Antonio, you really get the impression that the big kid from California’s premier high school program is dead serious about the Trojans. What should be exhilarating news for Trojans fans is that when Devin takes his official recruiting trip to Troy later in the month, he will also be bringing along fellow DLS teammate and defensive lineman Boss Tagaloa, who was really the “Boss” in the Spartans state championship victory over Corona Centennial.

The Obvious: Standout linebacker Mique Juarez, who will appear in the U.S. Army All-America Game, has eliminated the Trojans from recruiting consideration.

The Not So Obvious: Of course, as we know, anything can happen in recruiting until the ink is dry on a letter of intent, but it was no shock that Juarez listed UCLA in his final two choices, but Ole Miss. Seriously?

The Obvious: As the USC Trojans get ready for their last recruiting push for the Class of 2016, it’s also that time when already committed players suddenly decommit and “look” at other options.

The Not So Obvious: Was it just a coincidence that the Trojans received a decommit from defensive lineman Keanu Saleapapa (La Mirada, Calif./La Mirada) and then days later offered JUCO defensive end Jonathan Kongbo lll (6-5, 255) of Arizona Western? Probably not. Kongbo has now decomitted from a University of Tennessee offer. FYI, the big defensive lineman hails from Surrey, British Columbia, Canada.

The Obvious: Over the years, Arizona Western has provided the Trojans with All-American level players.

The Not So Obvious: To refresh your memory, the big names from AWCC are former All-America linebackers Willie Hall and Charlie Weaver.

The Not So Obvious: In a recent tweet sent out by Amari, he was wearing a uniform from helmet to toe that was half Clemson and half USC. The O/NSO would be shocked to not see that uniform become totally cardinal and gold. Let’s face it, Rodgers says the best coach he has ever had was his dad.

The Obvious: And finally, the Trojans have re-offered Gardena (Calif.) Serra defensive back Brandon Burton.