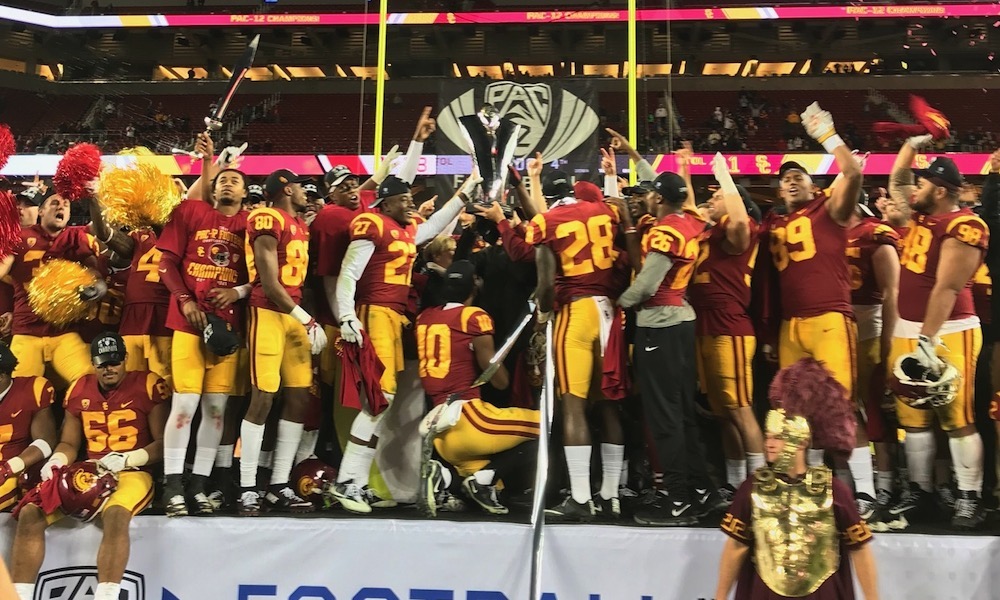 The Not So Obvious: It’s not often that the Trojans are underdogs in a college bowl game, but the fact remains that Ohio State was a controversial exclusion for the College Football Playoff semi-finals and the Trojans were not. It figures that Ohio State will be out to show the nation they belong as one of the top four teams in college football, and the Trojans will be out to show there should have been more consideration them than a few token courtesy comments. Bottom line: The Buckeyes will probably be looking to light up the AT&T scoreboard as supporting evidence, and the Trojans will try and provide their own fireworks against an Ohio State team that will be the best combination offense and defense the Men of Troy have seen this season.

The Obvious: With former Trojans’ quarterback coach and play-calling contributor Tyson Helton off to the OC job at Tennessee, the full play-calling responsibilities for the Ohio State game rests squarely with titled offensive coordinator Tee Martin, who must figure out a way to penetrate the vaunted Buckeyes’ defense.

The No So Obvious: Tee Martin is well aware that Ohio State brings the eighth-ranked defense in the country to the Cotton Bowl. Addressing the Buckeyes’ defense, Martin said, “They have really good players. They’ve shown the ability to go against teams like Wisconsin, smashmouth and running teams. They’ve gone against spread teams and the kind of things that we do. I have a lot respect for their defensive coordinator (Greg Schiano) and what he’s done over his career. Their players are playing right now at a high level. Their linebackers can really run around, and they’re very athletic and up front. They’re good versus the run and have a good pass rush. They’re No. 5 in the country for a reason. This is biggest game against the highest ranked team we’ve played, so they’re best defense we played all year, I think so.”

The Obvious: Tee Martin knows the strength of the Ohio State defense is their front, a group that is physically imposing and NFL ready.

The Not So Obvious: Assessing the Buckeyes’ D-line, Martin said, “They’re very similar to our defensive line, which we face very day. They have athletes that do well versus the run and get to the quarterback. We face a (USC) defense that leads the nation in sacks every day, and when you turn on the film and watch this Ohio State defense, they’re very similar to the guys we face (in practice). I give them (Ohio State) credit; they’ve been getting after the quarterback all season. Those guys are relentless in terms of that. Arguably, these are two teams that could have been the No. 4 team in the playoffs.”

The Obvious: Trojans’ defensive coordinator Clancy Pendergast will have his work cut out in trying to scheme an Ohio State offense that is averaging 45.2 points per game.

The Not So Obvious: In his early assessment of the Buckeyes’ offense, Pendergast said, “They are very explosive in the run and the pass. (J.T.) Barrett is a very good quarterback. I have a lot of respect for his game. He’s tough, he’s physical, he’s competitive, and he’s really a good leader. I think their offense is a little like Texas and Penn State from last year. Their offensive is one of the best we’ve played all year. They’ve got a lot of great players and they spread the ball around with the pass and everything starts with their running game. They have a lot of unique blocking schemes and different run plays, so I am very impressed with what they do.”

The Obvious: The Trojans have been traditionally challenged by quarterbacks that can both run and pass the ball, and in Ohio State quarterback J.T. Barrett (6-2, 220), he may be the best combo they’ve seen all season.

The Not So Obvious: Clancy Pendergast knows it will be a real challenge trying to contain J.T. Barrett, the straw that stirs the Buckeyes’ drink. The defensive coordinator says, “His leadership skills gets them in the right plays and formations, and you can see the players really rally around him. From a physical standpoint, he’s a tough runner. He has a tough mentality. He can throw the ball and he delivers the ball and just doesn’t look at his first read but goes through his whole progression. I am really impressed with how he plays.”

The Not So Obvious: While the selection of Darnold was expected, the O/NSO thinks it was also deserving that Nwosu was recognized for such a prestigious award as a result of his outstanding performances on defense throughout the season.

The Obvious: Although it was more a question of not if but when, at the Trojans’ team banquet head coach Clay Helton announced that walk-on true freshman kicker Chase McGrath and redshirt junior punter Reid Budrovich would be scholarship players for the 2018 season.

The Not So Obvious: Consider the O/NSO an old emotional sap for such announcements (pass the Kleenex), but it was total class that Helton make McGrath and Budrovich scholarship players next season for the important contributions they made to this season’s 2017 Pac-12 champions. Congrats to Chase and Reid for a well-deserved surprise. As Helton told the team, they were the season’s most-valuable non-scholarship players.

The Obvious: Tavita Pritchard will always be remembered as the Stanford backup quarterback making his first start when he helped engineer one of college football’s all-time upsets, leading the 41-point underdog Cardinal over Pete Carroll’s Trojans, 24-23, in the Coliseum back in 2007.

The Not So Obvious: Pritchard has been named the new Stanford offensive coordinator, taking over for Mike Bloomgren, who took the head coaching job at Rice. As the new Stanford OC, don’t expect Pritchard to change the Cardinal pound and ground offense. Tavita came up through the Cardinal ranks both as a player under Jim Harbaugh and a coach under David Shaw.

The Not So Obvious: With all the rumors swirling about Darnold’s destination next season, ESPN ran a story this week regarding the top candidates returning to college football and where they were positioned for the 2018 Heisman Trophy. As a sign of the times, Darnold was not listed among the returning players in the 2018 Heisman hunt. Stay tuned.

The Not So Obvious: Some might argue effectively that RoJo deserved another “team” up on the AP All-America three teams. It’s nice that he is being recognized nationally for his season, but the icing on the cake is if he can run for over 100 yards against an aggressive and talented Ohio State defense and execute a couple of signature TD runs.

The Not So Obvious: So, who was more surprised by Jack Jack’s selection, Jones or the Trojans’ fan base or both?

The Obvious: Linebacker Palaie Gaoteote (Las Vegas Bishop Gorman), who was an early verbal to the Trojans, is considered one of the top prep linebackers in the country.

The Not So Obvious: Gaoteote made national headlines this past week when he let it be known that he had cancelled an official recruiting visit to Ohio State, which was slated for last weekend. In fact, Palaie informed that he was done with the recruiting process. In Thursday’s WeAreSC mailbag, Garry P. stated the he expected Gaoteote is expected be one of the early December signees, which would certainly ignite some January recruiting momentum.

The Obvious: Mike Riley was the Trojans’ offensive coordinator back in 1995 when the Cardinal and Gold played in the 1996 Rose Bowl game and beat Cinderella Northwestern.

The Not So Obvious: Riley, who was Nebraska’s head coach until his firing this past season, has now resurfaced at Oregon State, a school that he was previously the Beavers’ head coach – twice.  Mike will work under new Oregon State head coach Jonathan Smith, a former Beavers’ quarterback who played at OSU under Riley. In coaching, what comes around sometimes really does come around. FYI, the Trojans will play at Oregon State next season on Nov. 3.

The Obvious: And finally, after the Trojans practice on Monday and Tuesday, they’ll have the rest of the week off before heading to Dallas on Saturday, Dec. 23.

The Not So Obvious: Nothing like spending Christmas in Dallas. And, BTW, next Friday’s O/NSO will feature our annual “Gift Giving edition” where we hand out our special treats to the Trojans players, coaches, fan base, and even a little something for the beloved Coliseum. Ho, ho, ho!