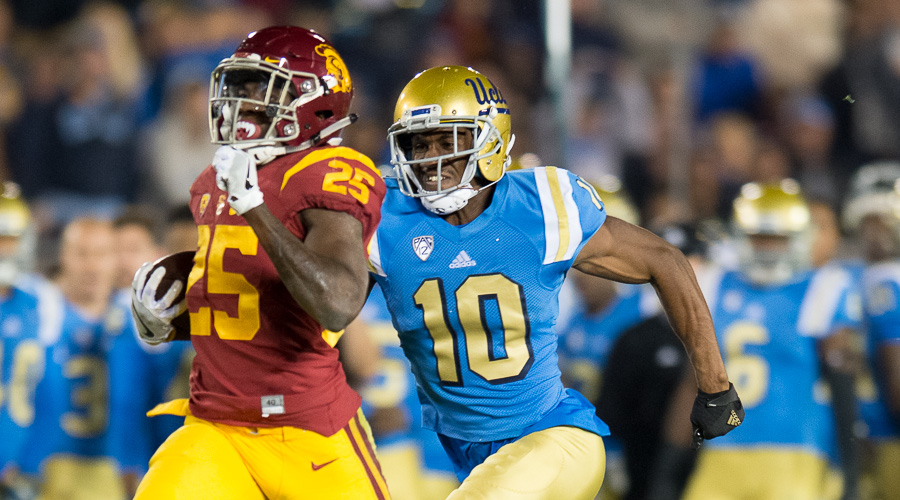 The Obvious: The CFP No. 11 USC Trojans (9-2, 7-1 Pac-12 South), the recently crowned champions of the Pac-12 South Division, host the crosstown rival UCLA Bruins (5-5, 3-4 Pac-12 South) in the Los Angeles Memorial Coliseum on Saturday (5 p.m. PT), and the Men of Troy will be looking to make it three consecutive victories over the Westwooders in the 87th meeting of the nation’s most intense 13-miles-apart rivalry.

The Not So Obvious: Aside from bragging rights and the Victory Bell, some may argue successfully that the marquee matchup of quarterbacks is the game’s major attraction. However, there are some emotional subplots from a USC perspective. If you’re a Trojans fan, you’d better take a selfie of the Coliseum because this will be the last time you see the Grand Old Lady from the inside as she historically looks today. When next you see the Trojans in the Coliseum, there will be major construction going on and for select season ticket holders, current seating locations will probably be a thing of the past.

And you might also want to take a selfie of Trojans’ starting quarterback Sam Darnold, who may be playing his last cardinal and gold game in the Coliseum. It would shock no one if No. 14 heads to the NFL after the upcoming bowl game. So, just the major architectural surgery on the Coliseum and the possible departure of one of USC’s great quarterbacks are enough to tug at your Tommy Trojan heartstrings and please pass the Kleenex.

The Obvious: The Trojans opened a 15-point favorite over the Bruins.

The Not So Obvious: The USC/UCLA series began in 1929 and the Trojans lead the series 46-31-7. You know the old clichés like “you can throw out the record books and the odds in this heated rivalry.” For Trojan fans, UCLA can present a list of quarterbacks that have brought pain and misery to the Trojans when the Bruins were the underdog. Ask any knowledgeable USC fan and they can raddle off UCLA quarterbacks like Norman Dow and John Barns, both of whom broke the odds. For the underdog Bruins, junior quarterback Josh Rosen is certainly capable of making things happen, especially when UCLA needs one more win to be bowl eligible. It should be noted, however, that the Bruins have yet to win a 2017 road game (0-5) while the Trojans have a current 15-game Coliseum home winning streak.

The Obvious: Saturday’s game featuring the Trojans and Bruins will be nationally televised on ABC (5 p.m. PT/ 8 p.m. ET).

The Not So Obvious: The ABC broadcasters for Saturday’s game will be Chris Fowler (play-by-play), Kirk Herbstreit (analyst) and Maria Taylor (sidelines).

The Obvious: Saturday’s radio broadcast from the Coliseum will air live (5 p.m. PT) on ESPNLA 710 AM with Pete Arbogast (play by play), John Jackson (analyst) and Jordan Moore (sideline).

The Not So Obvious: The local UCLA broadcast can be heard on flagship station KLAC (570 AM) with Josh Lewin (play-by-play), Matt Stevens (analyst), and Wayne Cook (sidelines).

There will also be a live ESPN national radio broadcast with Bill Rosinski (play by play), David Norrie (analyst) and Ian Fitzsimmons (sidelines).

The Obvious: Saturday’s Los Angeles weather forecast calls for sunny with a high of 78 and a low of 50 degrees, 38 percent humidity, and 0 percent precipitation.

The Not So Obvious: The real weather report is whether the Trojans will be emotionally ready for the Bruins, having already clinched the Pac-12 South Division and a trip to the Pac-12 Championship Game assured. We’ll see whether USC or UCLA is the more motivated team for different reasons. We’ll get a first-hand look whether the potent USC offense can make bread out of a very porous UCLA defense, whose obvious weakness is stopping the run. Without question, all eyes will be on the quarterbacks of the two teams, but watch how Trojans’ offensive coordinator Tee Martin elects to use the Trojans’ running game, which is led by a future high NFL draft pick, junior tailback Ronald Jones ll (photo above). We’ll see whether Tee Martin and the other Trojan offensive masterminds decide to do the obvious – run the ball – rather than put all their marbles on the gifted right arm of quarterback Sam Darnold. The strength of the UCLA defense is the secondary, and it will be interesting to see how UCLA head coach Jim Mora tries to unsettle and press young USC receivers like Tyler Vaughns and Michael Pittman. Like all games, it’ll get down to the lines, both offensively and defensively – not to mention turnovers. The Trojans have led the nation in sacks and UCLA QB Josh Rosen is not only a prime target but has a history of injury. You can bet that the Trojans front 7 will be in the mood for a blue and gold feeding frenzy, and we’ll see whether the UCLA offensive line can contain Trojans’ defensive coordinator Clancy Pendergast’s game plan. Rosen can expect to see plenty of blitzes and the uniform of Trojans’ outside linebacker Ucheena Nwosu leading the way. As for the UCLA running game, they have capable physical backs like junior Soso Jamabo (6-2, 210) and Bolu Olorunfunmi (5-10, 215), so there is a defensive challenge there for the Trojans. As for the UCLA receivers, they have a good one in junior Jordan Lasley (6-1, 210), but their injury list of receivers is problematic. The Trojans secondary, however, will be sternly tested by Rosen, but this group of Bruins’ receivers have been known to drop footballs. We’ll see whether the USC secondary can intimidate the UCLA receiver with smart, physical play while avoiding the dreadful pass interference flags and blown coverages so prevalent during the season. We’ll find out if Trojans’ sophomore corner Jack Jones is again the target of an offensive coordinator’s game plan and how will the expected return of junior corner Iman Marshall play into the Bruins’ plans. As for special teams, we’ll see whether Trojans placekicker Chase McGrath still has issues with his groin injury, which was part of his missing a field goal and a PAT against Colorado.

The Obvious: The 2017 Trojans’ offense averages 35.45 points per game while the UCLA defense is allowing 38.60 points per outing.

The Obvious: The Trojans are hoping that defensive coordinator Clancy Pendergast can come up with a game plan that will limit the UCLA offense and Bruins’ quarterback Josh Rosen. Pendergast said, “Obviously we have to stop the run offensively. They like to run the ball particularly early in game. Josh has a very good skill set, he spreads the ball around a lot. He obviously has a big arm and can make all the throws. He’s very accurate in all parts of the field. I am very impressed with his game and his ability not only to deliver the ball, but he has a very quick release. He’s very good at reading coverages.”

The Obvious: One of the great revived traditions of the USC/UCLA game is that both teams wear their home uniforms.

The Not So Obvious: Aside from the return of the home jerseys, one of the things that the O/NSO does miss is when the game was traditionally played in the Coliseum, which divided the Grand Old Lady into rooting halves. However once UCLA left for the Rose Bowl, home colored uniforms gave way to tradition home and away colors. Eventually former USC coach Pete Carroll and former UCLA coach Rick Neuheisel agreed to return to the original uniform configurations, and fans should be grateful to both former coaches for reestablishing that glorious tradition.

The Obvious: One Trojan player that UCLA quarterback Josh Rosen will surely be testing is sophomore corner Jack Jones.

The Not So Obvious: Regarding defending the lethal passes of Rosen, Jones said, “I would say we get hyped with any quarterback, but I think we’re really hyped because as a defensive back this is a team (UCLA) that spreads the ball around and they do have a good quarterback who is not afraid to spread the ball. They have pretty good receivers. Theo Howard, I like him. Jordan Lasley, I like him. These are guys I grew up with, went to camps with and stuff like that. Those guys are good, and I look forward to competing against them. I am looking forward to competing against Josh (Rosen).”

The Obvious: A major defensive key for the Trojans will be the ability of senior outside linebacker Uchenna Nwoso to help limit and contain Josh Rosen, but there’s a lot going through Uchenna’s mind regarding his last Coliseum game, the upcoming Pac-12 title game, and trying to defeat UCLA for a third consecutive time.

The Not So Obvious: Besides stopping Rosen, Nwoso will also be making his way down the Coliseum tunnel for the last time. Uchenna said, “It feels great having the year that I have had, and I am going out with a bang. I am trying to stay focused and keep my emotions down. I still have to get that championship because that’s the ultimate goal. You just have to take it one game at a time and being 1-0 every week. Running down the tunnel for the last time, lots of greats have come through and to follow those footsteps, you know, it’s been a blessing, I feel honored to be able to represent the school. It means a lot. USC owns L.A. and we have to go out and prove it one more time.”

The Obvious: As per every season, there are a number of USC-UCLA “connections.”

The Obvious: Saturday will be Senior Day, and the Trojans will recognize those that are playing their final game in the Coliseum with the traditional run through the “Heritage Tunnel”, comprised of former players, family and friends.

The Obvious: One of the keys to Saturday’s game will be time of possession.

The Obvious: Being the last game of the regular season and against UCLA, a large number of high profile recruits will be in attendance.

The Obvious: And finally, Saturday’s game will be the last USC regular season game.

The Not So Obvious: Saturday’s game against the Bruins is the earliest that the Men of Troy will have concluded a regular season since 2001 (Nov. 17).