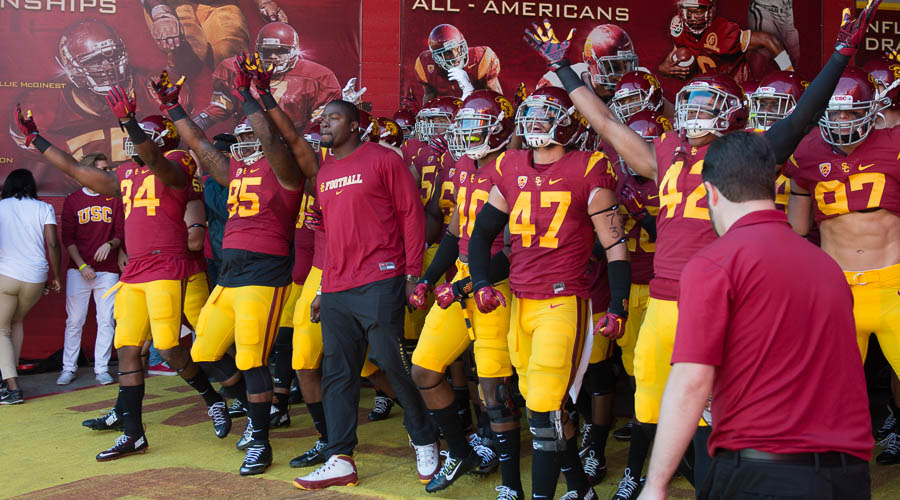 The Obvious: It was announced on Tuesday that the 2016 USC Trojans football opener against defending national champion Alabama on Sept. 3 in Dallas will kickoff at 7 p.m. CT/5 p.m. PT and broadcast live nationally on ABC.

The Not So Obvious: Right now it’s not really the kickoff time that is being the focal point of the upcoming game between two of the nation’s most storied football program but the recent arrest of Alabama’s star All-SEC left tackle Cam Robinson, who figured to be a lock first round draft pick after this season. Robinson and safety teammate Lawrence “Hootie” Jones were arrested on possession of a controlled substance and illegal carrying of a weapon. Alabama coach Nick Saban said the matter will be handled internally, but both players status for the game against the Trojans must now be considered up in the air.

The Obvious: The battle of the 2016 college football magazines will soon be upon us.

The Not So Obvious: How soon? Athlon will put on newsstands everywhere its 2016 college preview on May 24. The O/NSO is surprised that one of these preseason publications doesn’t go and publish a pre-spring practice magazine, but maybe that’s just a matter of time.

The Obvious: Each season it seems like there are fewer and fewer college football magazines on the stands, perhaps a result of information on the electronic super highway.

The Not So Obvious: Are you too young to remember when the No. 1 magazine for college football was Street and Smith? And by the way, whatever happened to GamePlan, which once held its own in the publication market?

The Obvious: Trojans All-Pac-12 junior wide receiver JuJu Smith-Schuster will be a lead candidate for not only post-season All-America honors but for the prestigious Biletnikoff Award.

The Not So Obvious: Part of the early All-America publicity drive for JuJu will be the amount of cover shots he appears in on the preseason college football magazines. In it’s Pac-12 edition, JuJu shares the Athlon regional cover with UCLA quarterback Josh Rosen.

The Obvious: Most preseason magazines will finish with a team preview with a final analysis.

The Not So Obvious: The 2016 Athlon preseason college football magazine, which ranks the Trojans No. 23, is no different. In its USC final analysis, Athlon writes, “There wouldn’t be so much concern about a new quarterback and an inexperienced defensive line if it weren’t for a schedule that ranks among the toughest in the country. Helton, refreshingly humble compared to his recent predecessors, can’t stop gushing about how fortunate he is to have this job. The talent he has, especially at running back, up front on offense and in the defensive secondary, is good enough to contend for a Pac-12 title. But if he can’t go 9–3 or at least 8–4 with this group, he might not feel so lucky anymore.”

The Obvious: Bruce Feldman is considered an authority on college football.

The Not So Obvious: In Feldman’s preseason Top 25, he lists the Trojans at No. 23.

The Obvious: One of the complaints about the Coliseum has always been the cost of concessions.

The Not So Obvious: Although the O/NSO doesn’t know how realistic it is, but the 2017 Atlanta Falcons in honor of their new football stadium have decided to reduce the cost of food substantially. The cost of a beer ($5), refillable sodas ($2), a burger ($5), and a slice of pizza ($3) will be way below the norm. And for you nacho lovers, an order will be $3. Think the Trojans will do the same to inaugurate the renovations of the Coliseum later in the decade?

The Obvious: According to a recent email, the Trojans are offering football season tickets for as low as $50 per game.

The Not So Obvious: Those $50 per game season tickets are located near the very top of the enclosed portion of the Coliseum behind the end zone.

The Obvious: The Trojans will play the Cal Bears in a Thursday night game, Oct. 27, in the Coliseum.

The Not So Obvious: If you thought the Bears would be in bad shape considering their lost quarterback Jared Goff to the Rams as the No. 1 overall pick in the NFL draft, the Berkeley Bears received good news when former Texas Tech quarterback Davis Webb confirmed that he will be eligible to play for Cal as a graduate student. Webb originally committed to Colorado in January.

The Obvious: Sports Illustrated is a national sports publication both in print and on line.

The Not So Obvious: In an interview with Clay Helton, SI asked the coach what he likes to do in his free time. Helton replied, “Now, with my family I do have one hobby: I like to fish. I don’t get to do it often, but every summer we all meet down at dad’s place down south of Naples, Fla. My brother, his family, my family, we all meet down there and fish for a week.”

The Obvious: And finally, the hours of a football coach at the D-1 level are long and can interrupt even the most stable marriages or relationships.

The Not So Obvious: In the Sports Illustrated interview with Clay Helton, the coach revealed he is sort of a family vagabond during the week. Helton said, “I check in on Mondays and I go home on Thursdays during the season. We call date night Thursday—Thursday is date night, here we are, go home. Friday morning, I get a haircut. Usually we have a game on Saturday, so I’ll watch the tape Sunday. I’ll go home for dinner, and then I check into the hotel here for Monday, Tuesday and Wednesday.”