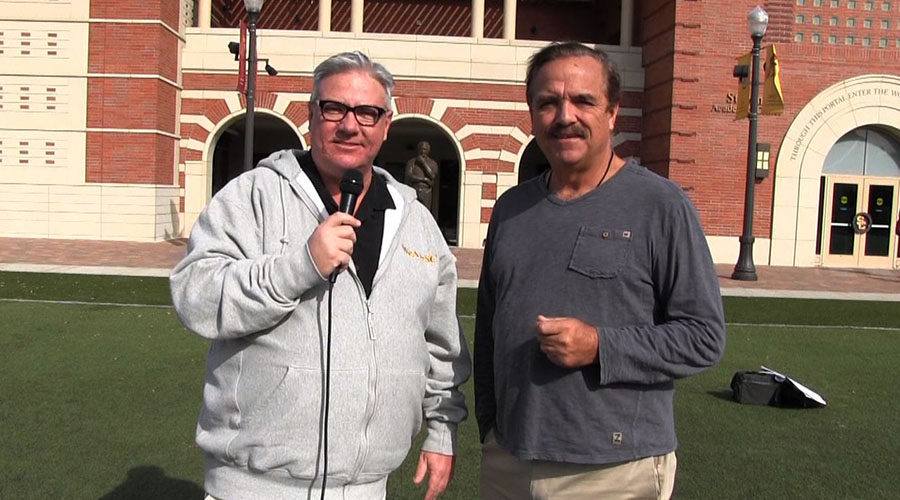 The Obvious: Trojans’ football radio voice Pete Arbogast (photo above on right with WeAreSC publisher Garry Paskwietz) has been named the Radio Play-by-Play Sports Broadcaster of the Year by the Southern California Sports Broadcasters.

The Not So Obvious: The one thing that you notice when you meet Arbo for the first time is that God-given, deep voice. What you hear on the air is exactly what you hear in person. There is no intentionally dropping an octave to gain a larger measure of awe. What you hear is what you get. Like all broadcasters, Pete has his supporters and his detractors, but then again so did the Trojans’ late and legendary radio voice Tom Kelly. Judging a sportscaster is such a subjective matter. Heck, even my late ex-father-in-law from Brooklyn couldn’t stand Vin Scully. He thought that Vin was a Red Barber impersonator. Go figure.

The Obvious: Pete Arbogast has no problem stating is opinion during a broadcast.

The Not So Obvious: Like Tom Kelly, Arbogast speaks to what his heart is thinking. He makes no bones about being a cardinal and gold homer. The beauty of Arbo is when he is really “up” for the broadcast of a big game, it’s hard to find a college football voice any captivating. The son of late local Southern California radio personality, Bob Arbogast, there’s nothing more enchanting than listening to Pete talk about growing up in a broadcasting family and the sports icons he met along the way. Talking sports trivia, especially the Dodgers or local just plain local sports, with Pete is a fun exercise.

The Obvious: One of Pete Arbogast’s play-by-play calling card phrases is “How do you do!”

The Not So Obvious: Arbogast borrowed the phrase from retired legend Vin Scully with, of course, Vinny’s permission. One of the wonderful aspects to Pete’s career, which included a stint as the Dodgers’ public address announcer, is the fact that away from the mike he is devoted to helping the less fortunate, and he has been a summer camp counselor for the Boys’ Club. Over his professional career, which also included a stint doing NFL games with the Cincinnati Bengals, there’s one illusive award that would be perhaps his greatest and most cherished achievement – being eventually elected to the USC Athletic Hall of Fame. Will it come to pass? Well, is there a reason why it shouldn’t? The O/NSO can just hear his immediate response if elected – “How do you do!”

The Not So Obvious: “J.J.”, as he is affectionately called by those close to him, has wonderfully complimented Arbogast on the presentation of USC football games over the years. On a side note, with national letter of intent approaching, J.J. is right in the middle of the Trojans’ recruiting Class of 2018. His son, John Jackson lll, a stellar wide receiver out of perennial power Gardena (Calif.) Serra, is being hotly recruited by the Trojans among others. It would seem to be a no-brainer that Jackson lll going to Troy – given the fact that the late John Jackson Sr. was a highly respected Trojans’ running back coach and offensive coordinator under John Robinson. However, it should be noted the mother of John Jackson lll is a graduate of UCLA. Hmmm.

The Obvious: There are two previous sports broadcasters in the USC Athletic Hall of Fame.

The Obvious: Speaking of media, there are nine journalists in the USC Athletic Hall of Fame.

The Obvious: There is NFL draft talk that Sam Darnold could be taken as the overall fifth pick by the Denver Broncos.

The Not So Obvious: Now being picked No. 5 may seem like a drop after being mentioned as the top overall pick, but if you had your choice of playing for the Cleveland Browns as the No. 1 pick or the No. 5 pick with the Denver Broncos, who would you rather play for? A rhetorical question?

The Obvious: The current executive vice president of football operations and general manager of the Denver Broncos is legendary Broncos’ quarterback and Stanford alum John Elway.

The Not So Obvious: There are some that dare compare Sam Darnold to John Elway by the way they both move around the pocket and seem to play their best in crunch time, something that’s probably not lost in Elway’s evaluation of Darnold.

The Obvious: Tis the season when talks turns to graduate student transfers, and the Trojans are certainly part of that conversation, especially when it comes to quarterback options.

The Not So Obvious: One of the swirling rumors of a graduate transfer focus on former Michigan quarterback Wilton Speight, but a new name is being mentioned with the recent announcement that “former” Stanford quarterback Taylor Chryst is said to be searching for one more “graduate” season.

The Obvious: And finally, the Trojans play their second game of the 2018 season at Stanford.

The Not So Obvious: If it were an option, having an experienced former Cardinal quarterback being the Trojans’ signal caller would have its advantages. First, there would be the experience factor as Taylor Chryst threw for a career 1,926 yards and 19 touchdowns. Second, who would know the Stanford defense and personnel better than a former Cardinal quarterback? It all make for some rather intriguing conversation. And, BTW, Chryst’s uncle is Wisconsin head football coach Paul Chryst.