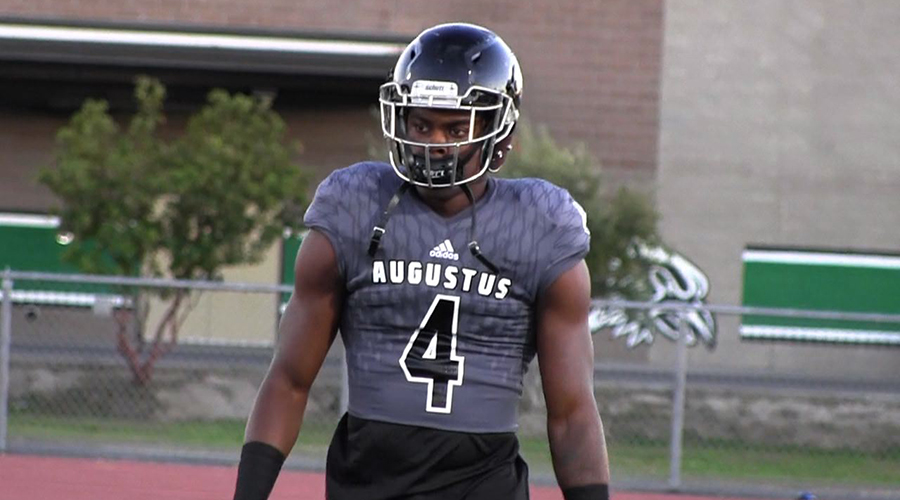 The Obvious: The USC Trojans final recruiting weekend before Wednesday’s National Letter of Intent Day got off to a sizzling start Friday morning, but not by the highly anticipated arrival of the two Los Angeles Hawkins High superstars, athlete Greg Johnson and receiver Joseph Lewis (photo above), but the announcement by Phoenix (AZ) Mountain Pointe High safety Isaiah Pola-Mao that he’ll be attending University of Southern California in the fall.

The Not So Obvious: Like dominoes falling one after another, Pola-Mao (6-4, 196), a three-time All-Arizona selection and nephew of former Trojans legend Troy Polamalu, is the latest to make the announcement that he will be donning the cardinal and gold. And so much for that rumor that Pola-Mao and the Trojans other high valued safety verbal, Bubba Bolden (Las Vegas Bishop Gorman), would not play at the same school. The fact that the Trojans could get commitments from both Bolden and Pola-Mao shows Clay Helton’s program is in a good place. Now, if the Trojans can close the deal on the Hawkins dynamic duo of Greg Johnson (5-10, 183) and Joseph Lewis (6-2, 207), the prospects of a glorious signing day could vault USC into the rare air of final team recruiting rankings.

The Obvious: The state of Arizona has provided the Trojans football program a number former standout prep players.

The Obvious: Every player that selects a college program does so for specific reasons.

The Not So Obvious: After his Friday press conference and explaining his decision to be a Trojan, Isaiah Pola-Mao said, “The biggest thing to me was Coach Helton and he showed love from the heart. He is genuine and treated me like his wife and his sons. I really love that man. I had family go there before me go through USC. I grew up a USC fan and when I actually got the offer and when I was there, it just felt at home.”

The Obvious: In the course of a few recruiting days, the future of the USC Trojans defensive line went from measured concern to concentrated euphoria with the announcement that highly touted defensive lineman Marlon Tuipulotu (Independence, Oregon/Central High), the U.S. Army All-American, would be joining intriguing prospect Brandon Pili (Portland, Oregon/Westview High) as part of the Trojans Class of 2017.

The Not So Obvious: Yet with all the good D-line recruiting news, it could rapidly become great recruiting news if U.S. Army All-American and The Opening invitee Jay Tufele (South Jordan, Utah/Bingham High), too, announces for the Trojans on signing day. If the Men of Troy are fortunate to get a commitment from Tufele (6-3, 297), who is taking his final recruiting visit this weekend at Utah, it would be one of the great West Coast D-line recruiting hauls of high school talent in recent Trojans memory.

The Obvious: Marlon Tuipulotu (6-2, 295) will graduate early from Central High and enroll for the USC’s spring semester, thus participating in spring football practice.

The Not So Obvious: If you’ve been able to watch Marvelous Marlon on film, he has mostly played defensive end and has surprising closing speed for a person his size. To show you just what kind of an athlete the Men of Troy are getting, Tuipulotu was the Oregon Heavyweight Wrestling Champion. On a football field, you can see on film how he works his hands like an athlete that was exceptional in high school wrestling.

The Obvious: Many high school stars are now announcing their college choice through social media rather than the standard news conference at their high school or at a television station.

The Not So Obvious: For Marlon Tuipulotu, once Washington’s No. 1 recruit, his announcement was a first a classy thank you to University of Washington head coach Chris Petersen, his staff, and the university for taking the time to recruit him over a long period of time. It was only in the final line of his five heartfelt sentences that he announced on social media for the Cardinal and Gold. The announcement by Tuipulotu was so personal that he requested no interviews afterward.

The Obvious: The Trojans will begin spring practice in March.

The Not So Obvious: With the Trojans in need of defensive line bodies, Marlon Tuipulotu will – thanks to his early USC spring enrollment – get every opportunity to gain the necessary training and experience to be a contributor for the 2017 season. Based on his performances in the U.S. Army game and The Opening, it would be a shock of “Tui” doesn’t vie for early playing time.

The Obvious: The Trojans are getting two standout defensive linemen in Marlon Tuipulotu and Brandon Pili from the state of Oregon.

The Not So Obvious: So, when was the last time the Trojans got two defensive line studs from the state of Oregon that the Oregon Ducks were unable to keep at home? It should, however, be noted that Pili made his recruiting decision of the Trojans over the local Oregon State Beavers.

The Obvious: Nobody knows recruiting better than the players being recruited, especially with their knowledge of other recruits gained from recruiting trips.

The Not So Obvious: If you agree with the above statement that recruits have the inside knowledge of other recruits, then as a Trojans fan you had to be giddy over the recent comments from current Trojans verbal Hunter Echols, a defensive end from Los Angeles Cathedral High. In a recent WeAreSC recruiting story by Johnny Curren, Echols told Curren, “Just know signing day will be a beauty. Signing day is going to be like a second Christmas. It’s going to be filled with the kind of guys that you wish for. That’s all I can say.”

The Not So Obvious: For McQuay, the Shrine game is about hour away from where he played his high school ball (Seffner, Florida/Armwood HS). Leon had two tackles in the game while Taylor was on the end of a 13-yard reception.

The Obvious: And finally, Michigan coach Jim Harbaugh gained headlines this past week when it was announced that as part of spring ball, he would be taking his Wolverines to Rome, Italy for three spring practice sessions.

The Not So Obvious: Doesn’t it make more sense for Clay Helton to take his team to Rome for a trio of spring practices? After all, they could work out in the original Coliseum.