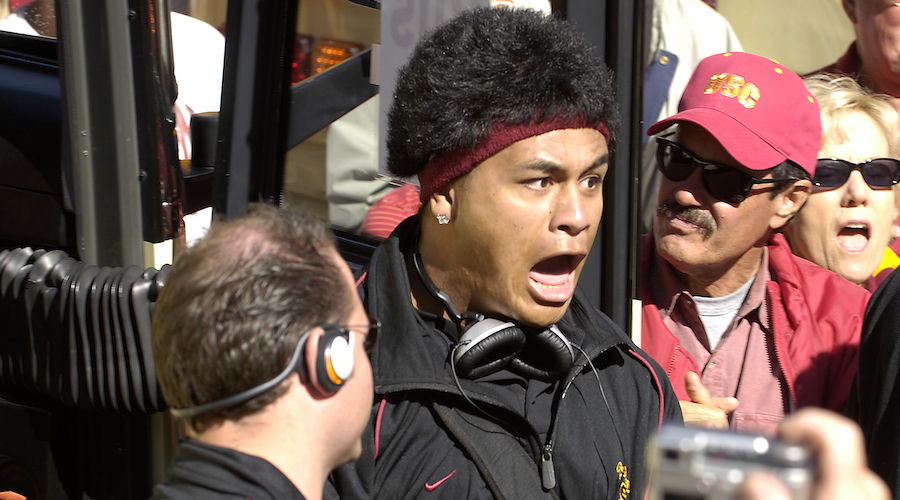 The Obvious: Don’t know about you, but there’s just something about a name that seems to scream out that somebody is not just a football player, but a player that should be feared and respected.

The Obvious: When it comes to quarterbacks, the Trojans can trot out names that sound just as good as they sound.

The Not So Obvious: You just know by the name these athletes were going to be elite quarterbacks at Troy: Morley Drury, Orv Mohler, Cotton Warburton, Grenny Lansdell, Jim Hardy, Jim Sears, Pete Beathard, Mike Rae, Todd Marinovich, Rodney Peete, Carson Palmer, and Sam Darnold. Some names, while super to great players, didn’t initially just jump out at you like Steve Sogge, the starting quarterback on the 1967 national champions. Honestly, for all their greatness, do the names Matt Leinart, Pat Haden, Paul McDonald, or Vince Evans for all their greatness sound like intimidating quarterbacks?

The Obvious: When it comes to running backs, USC isn’t known as Tailback U for nothing, especially when it come to the names of those celebrated running backs.

The Not So Obvious: There are names that just sound like home run tailbacks: O.J. Simpson, Clarence Davis, Anthony Davis, Marcus Allen, Charles White, Ricky Bell, Ricky Ervin, Reggie Bush, and LenDale White. Although he was a Heisman Trophy winner, does Mike Garrett sound intimidating until you add his nickname “Iron Mike” Garrett or Jon Arnett except when you add his nickname of “Jaguar Jon Arnett”? Or how about Frank Gifford? Or Garrett Arbelbide?

The Obvious: One of the forgotten position in today’s era is the fullback, but Troy had some fullbacks whose names you wouldn’t want to meet head on.

The Not So Obvious: Some of those names should just send shivers down the spines of any linebacker: Marlin McKeever, Sam “Bam” Cunningham, Mosi Tatupu, Ben Wilson, and Leroy Holt. Then again some of the best fullbacks didn’t necessarily have names that were scary like Danny Scott, David Farmer, Lynn Cain, Scott Lockwood, and David Kirtman.

The Obvious: It just seems that when you look at names and explosive skill players, it seems like many names are just no-brainers when it comes to translating actions on the field.

The Not So Obvious: Wide receivers seem to have an abundance of names that live up to the lettering: Rod Sherman, Lynn Swann, Sam Dickerson, Keyshawn Johnson, Curtis Conway, Marqise Lee, Robert Woods, Edesel Garrison, J.K. McKay, Dwayne Jarrett, and Big Hal Bedsole. Then there were extremely effective to great receivers whose names wouldn’t shake the boots of any defensive back like Eric Affholter, John Jackson, Steve Smith, and Mike Williams.

The Obvious: When it comes to tight end, the Trojans have had their share of great ones and ones whose names preceded their greatness.

The Not So Obvious: Boy, you talk about breaking into a sweat. Have you forgotten such names as Bob Klein, Charles “The Tree” Young and Jim O’Bradovich? Then again, there were some elite tight ends whose names didn’t really come off like Las Vegas evening signage like Mackey Award winner Fred Davis, Hoby Brenner, Paul Green, Scott Galbraith, and John Allred.

The Obvious: When it comes to intimidating names of offensive linemen, no college football team can trot out names that could cause more nightmares to the defensive line opposition.

The Obvious: Defensive linemen should always have the type of names that make a quarterback’s legs feel like Jello.

The Not So Obvious: When you look at names of legendary Trojan defensive linemen, it’s not hard for quarterbacks and running backs to fear the confrontation: Richard Dimler, Al Cowlings. Bubba Scott, Tody Smith, Monte Doris, Gary Jeter, George Achica, Kenechi Udeze, Shaun Cody, Sedrick Ellis, Jurrell Casey, and Leonard “Big Cat” Williams. Then there were names that weren’t quite as terrifying, but their play was like John Grant, Darrell Russell, and Mike Patterson.

The Obvious: One of the most prolific position for names for battle were the Trojans’ defensive end/linebacker position, names that just shout out beware, beware, beware!

The Not So Obvious: Would anybody not take out life insurance if they had to block the likes of Tim Rossovich, Jimmy Gunn, Charlie Weaver, Willie Hall, or Willie McGinest?

The Obvious: There is no question that when it comes to enforcers on defense, it starts with the linebackers in the middle.

The Not So Obvious: Talk about names that sound like primeval predators, who amongst you would want to deal with Marlin McKeever, Rey Maualuga (photo above), Richard “Batman” Wood, Charles Anthony, Lofa Tatupu, or a Hayes Pullard? Some inside linebackers were tough as nails even though their names didn’t sound like it as Kevin Bruce, Clay Matthews, and Adrian Young.

The Obvious: Then there are the Trojan outside linebackers that can sound like a train wreck waiting to happen.

The Not So Obvious: Who amongst you would like to do battle with names like Junior Seau, Mario Celotto, Chip Banks, or Jack Del Rio? Again, some names just didn’t sound like a bad Halloween moment, but their play certainly caused fear like Dale Mitchell, Duane Bickett, Dennis Johnson, Matt Grootegoed, and Brian Cushing.

The Obvious: The O/NSO seems to think that when choosing a name for a future superstar, it seems that the safety position requires great thought and reflection.

The Not So Obvious: The Trojans certainly have their names here, some of whom even played corner, or have you forgotten enforcers that do their names justice like Mike Battle, Artimus Parker, Charles Phillips, Ronnie Lott, Cleveland Colter, Troy Polamalu, and Darnell Bing. Just as great but not name intimidating would be Mark Carrier, Dennis Thurman, Joey Browner, Dennis Smith, and Tim McDonald.

The Obvious: One of the tougher position to have an intimidating name is probably at corner, and one has to really inspect the options to find those worthy of names that would freeze a wide receiver.

The Not So Obvious: Certainly, a name like Adoree’ Jackson sounds like force or even a “Biggie” Marshall. However, would one be petrified going up against players like Nate Shaw, Danny Reece, or a Brian Kelly, all great players in their own right?

The Obvious: And finally, you can argue and debate over the above names or their categories, but you can’t argue their play. They all lived up to their names one way or the other.

The Not So Obvious: A word of advice. If you’re planning on having a baby boy and you want him to play college football for the USC Trojans, you might want to take great care in choosing a name. It could be a name that dictates their cardinal and gold potential.