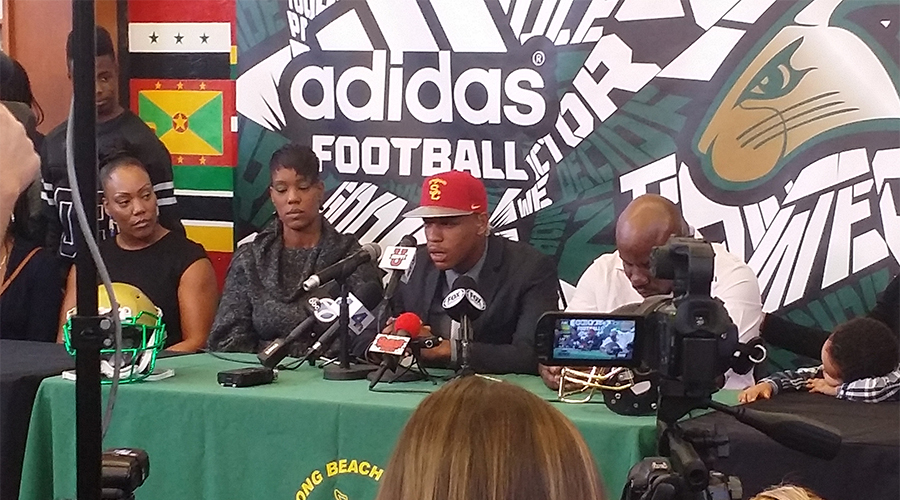 The Not So Obvious: It’s just a sign of the times and if you think that Marshall was over the top consider with his music video announcement consider the College Football Hall of Fame and the NFF Touchdown Club of Atlanta Chapter held a National Signing Day event in which 200 student-athletes from the state of Georgia announced their choices during a seven-hour live webcast, which was emceed by the local FOX Sports team.

The Obvious: By all accounts, Trojans incoming freshman Iman Marshall conducted his recruiting journey with class and dignity.

The Not So Obvious: The O/NSO actually enjoyed Iman’s video and let’s face it, times have changed. Strictly from an entertainment and fun point of view, it very well done, but there is no question that Marshall was marketing himself for the future. The kid obviously has “Biggie”plans and excuse the pun. Was it too over the top? Probably, but in today’s recruiting world and youth in general, it’s a matter of opinion, so what comes next in 2016 announcements? Maybe a parade down Main Street? A Tonight Show announcement with Jimmy Fallon? A CNN special break-in report with Anderson Cooper?

The Obvious: The Iman Marshall video announcement was very professionally made.

The Not So Obvious: If you didn’t see it, at the close of the music video announcement there was a visual disclaimer that USC had anything to do with its production, which would have been an NCAA violation.

The Obvious: Mike Riley is a former USC offensive coordinator and the first-year head coach of the Nebraska Cornhuskers.

The Not So Obvious: In an interesting story, Ed Riley, a professor of anesthesia at Stanford University and the younger brother of Mike Riley, wanted to make the correct decision before letting his sons play high school football. He reviewed the medical research on concussions and the risks of high school players developing degenerative neurological diseases later in life. Ed studied reports from the Centers for Disease Control and Prevention and a Mayo Clinic study that found football presents no larger risk than participating in the band, glee club or choir. Convinced?

The Obvious: Former Trojans head coach Pete Carroll has a son named Brennan, who was once the USC tight end coach and recruiting coordinator.

The Not So Obvious: History repeats as Brennan is rejoining his father with the Seattle Seahawks. This marks the second of the two Carroll boys working for dad up in Seattle. Younger brother Nate has been part of the Seahawks staff as an assistant wide receivers coach.

The Not So Obvious: A number of Trojans fans that liked and appreciated Pendergast when he was the Trojans defensive coordinator. Many are relieved that Clancy was not hired as a DC by a Pac-12 team. There was a faction out there that would have liked to have seen Pendergast return as the Trojans DC, but that was never an option.

The Not So Obvious: Kris, who joined the Seahawks’ staff in 2010 after spending two seasons as a Trojans graduate assistant as a defensive backs coach, is slowly working his way the NFL assistant coaches ladder. He is a rising star and might he one day be considered for the head coaching position at his alma mater?

The Not So Obvious: The Trojans are moving up, now No. 3 in the country behind Ohio State and TCU. Behind the Trojans? No 4 Alabama. How do you like them apples?

The Obvious: The Trojans will travel to Eugene, Oregon, to play the defending Pac-12 champion Ducks on Nov. 21 in Autzen Stadium.

The Not So Obvious: By the time the Trojans play at Oregon at the tail end of the season, the Ducks should be entrenched with a new quarterback. One of the candidates appears to be former Eastern Washington quarterback Vernon Adams Jr., who played locally in SoCal at Alemany High. If Adams, who will be eligible for one season after an outstanding career at EW, is the man to replace Heisman Trophy winner Marcus Mariota, the 5-foot-11 Adams will illustrate whether it’s the Oregon systems that makes the player or vice-versa.

The Obvious: Former Trojans defensive coordinator Monte Kiffin will not return to the Dallas Cowboys coaching staff in 2015.

The Not So Obvious: It would appear that nice guy Monte’s career is coming to a conclusion; however, it would’t be a total shock if somebody still took a chance on Kiffin in some consultant capacity. Might Alabama head coach Nick Saban be interested in having the father join the son? Oy veh.

The Obvious: Last season, the USC Trojans Marching Band was voted by USA Today as the nation’s No. 1 collegiate marching band.

The Not So Obvious: If you enjoyed the TMB during the football season, you might want to attend a special performance when Dr. Arthur C. Bartner directs his famed musicians in “A Tribute to the Music of Film” on April 26 at 3 p.m. in the Bovard Auditorium. RSVP information will soon be released, so stay tuned.

The Not So Obvious: If you know Rocky, he is one of the finest and nicest gentleman and coach you’d ever want to meet. Congrats to him and the O/NSO wishes him the best in his new appointment.