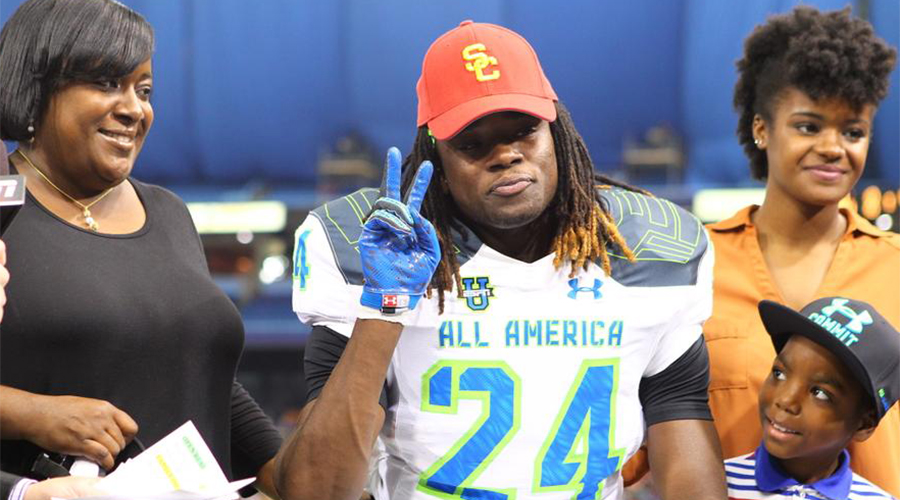 The Obvious: After all the national high school all-star games held earlier this month, there is a new ESPN 300, and the USC Trojans have been one of the main beneficiaries to the talent reevaluations.

The Not So Obvious: According to the new ESPN 300, Trojans tailback verbal Ronald Jones ll (McKinney, Texas/McKinney North – see above photo) is now the No. 1 running back in the country and 34th best prospect in the nation, and when was the last time the Trojans secured the services of the No. 1 running back in the country? Well, many believed in 2002 that a running back named Reggie Bush out of La Mesa Helix High in San Diego County was the best in the land.

The Not So Obvious: Although Chuma has already began his college life at Troy, the ESPN 300 now lists him at No. 21 nationally and the third best prep offensive tackle in America.

The Not So Obvious: This critical tight end recruit made a significant jump in the ratings, now No. 85 nationally in the ESPN 300. Petite is ranked by the ESPN 300 as the Trojans third highest-ranked committed prep star behind Chuma Edoga and Ronald Jones ll.

The Not So Obvious: Well, it’s been quite an odyssey for George as it pertains to his Trojans career – injuries and coaching changes. The O/NSO wishes him well, but the feeling here is this is a college career unfulfilled. Whatever George’s reasons (and don’t think that the two JC receivers the Trojans brought in didn’t get his attention), he was just starting to scratch the potential of his USC career, and it’s unfortunate he didn’t take advantage of one more season of seasoning.

The Not So Obvious: The good news for Ed is that he can stay near his family in Louisiana and be at peace with himself. There was no way he was ever going to coach again at USC under the present situation, and that’s probably a good thing for all parties involved. The Trojans will, however, have to be very vigilant when “Coach O” comes to SoCal and tries to snatch a defensive lineman and sooner rather than later could come with Gardena (Calif.) Serra High’s Rasheem Green, who is officially visiting the Trojans this weekend.

The Obvious: True freshmen Toa Lobendahn and defensive back Adoree’ Jackson have been named to the Football Writers’ Association Freshmen All-America team.

The Not So Obvious: Just two more awards for two very deserving freshmen and don’t think some of the current uncommitted recruits won’t be made aware of this honor.

The Obvious: The Indianapolis Colts will travel to Foxboro to play the New England Patriots on Sunday for the AFC title game.

The Not So Obvious: If case you haven’t noticed, the starting center snapping the ball back to Colts’ quarterback Andrew Luck is former Trojans center Khalid Holmes, the former Santa Ana (Calif.) Mater Dei stud. Holmes, the lone Trojan on the Colts’ roster, has proved some doubters wrong that he wasn’t cut out for the NFL. Even though the Colts are underdogs to Tom Brady and the Pats, don’t be shocked if Holmes and his Colts’ teammates put up a good fight.

The Obvious: Dennis Thurman is a former Trojans All-America safety.

The Not So Obvious: Thurman will accompany new Buffalo Bills head coach Rex Ryan from the New York Jets to the Buffalo Bills.

The Obvious: Former Trojans defensive lineman Willie McGinest was once a linchpin for the New England Patriots defense.

The Not So Obvious: Going into this Sunday’s AFC title game, there are no Trojans on the New England Patriots roster.

The Obvious: The Seattle Seahawks will host the Green Bay Packers for the NFL title on Sunday.

The Obvious: The defending NFL champion Seattle Seahawks, who opened as 7 ½-points favorites to defeat the Packers, not only have former Trojan players on their roster but coaches, as well.

The Not So Obvious: The head strength and conditioning coach for the Seahawks is respected former Trojan Chris Carlisle along with assistant Jamie Yanchar.

The Obvious: Pete Carroll will again find some familiar names and faces when his “SeaTrojans” face the Packers.

The Not So Obvious: Familiar names to Carroll and the Trojans family playing for the Packers include linebackers Clay Matthews and Nick Perry. The O/NSO finds it hard to believe that Clay is already in his fifth season in the NFL while Nick is in his third campaign.

The Obvious: Retired coach R.C. Slocum is a former Trojans assistant coach that became a College Football Hall of Fame inductee for his work as head coach at Texas A&M.

The Not So Obvious: Green Bay Packers special team coach Shawn Slocum, the son of R.C., is a former Trojans assistant coach.

The Not So Obvious: Entering college in the spring of your senior year in high school can give a freshman an added advantage coming into summer training camp. However, it is no guarantee that it’s automatic playing time. Two players who completed their senior year in high school before beginning their Trojans career in the summer were DB/WR Adoree’ Jackson and WR JuJu Smith, and they seemed to do all right.

The Obvious: Academics in athletics have been a priority for Trojan athletic director Pat Haden.

The Not So Obvious: Steve Sarkisian’s football team’s average GPA was its highest ever for a fall semester, including nearly a quarter of the players earning a 3.0-plus semester GPA.

The Obvious: A number of former Trojans, NFL active or retired, have returned to USC to continue their work in the classroom.

The Obvious: And finally, Bob Boyd, arguably the greatest basketball coach in USC history and a three-year letterman (1950-52), passed away on Wednesday.

The Not So Obvious: The coach had planned to attend the Trojans men’s basketball game against UCLA on Wednesday night in the Galen Center with his son, Bill, but he passed away earlier in the day. Had it not been for UCLA’s John Wooden dynasty and the fact that in those days the NCAA tournament and basically did not take at-large teams, the Trojans might have won a national championship or two under Boyd.

Boyd’s teams were still able to beat the mighty Bruins even with UCLA’s legendary center Kareem Abdul Jabbar. In fact, Boyd’s wins over UCLA in 1969 and 1970 were the Bruins’ first losses in Pauley Pavilion.