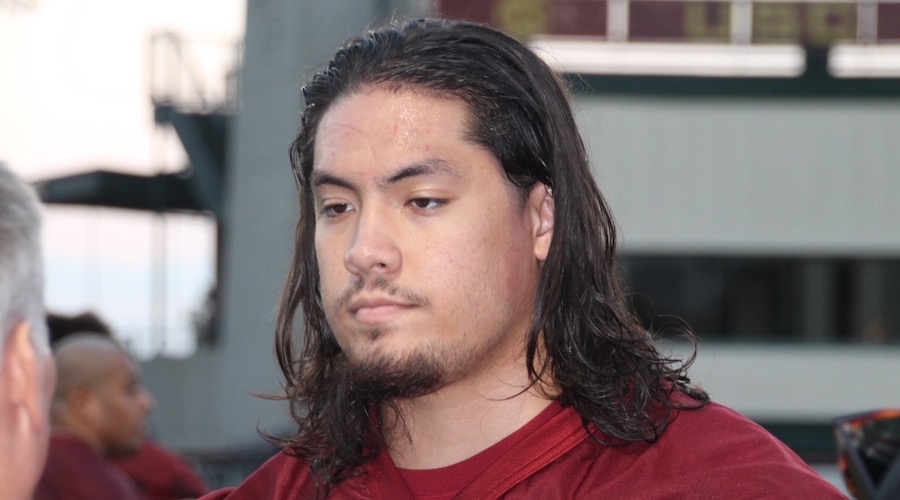 The Obvious: As the Trojans ready for the start of spring practice on Tuesday afternoon (3:13 p.m.) on Howard Jones/Brian Kennedy Fields, those that will be attending campus to watch the gridiron festivities will have their own specific items in which to scrutinize.

The Not So Obvious: As a public service, the O/NSO will tell you, good readers, what we’ll be specifically scrutinizing in the coming weeks. It will be a time for the obvious and not so obvious competition.

The Obvious: The battle of quarterbacks between Matt Fink and Jack Sears.

The Not So Obvious: In some ways, it’s a bit disappointing that incoming freshman JT Daniels won’t be part of the spring competition. However, that won’t stop anybody from watching the battle between Fink and Sears. The O/NSO wants to see just who the better passer is and who is the better runner on a consistent basis and perhaps more importantly, just who is the better leader of the offense. It’ll be interesting to see if the Trojans alter the offense to play to the strengths of each quarterback. The surprise may come in time by seeing which quarterback’s strengths rise to the occasion as spring ball runs its 15-day course.

The Obvious: The competition at tailback becomes paramount with the news that sophomore stud Stephen Carr is out for the spring.

The Not So Obvious: Sure, it’s disappointing that Carr won’t be available while recovering from a back injury. However, the competition between Aca’Cedric Ware and Vavae Malepeai should be fascinating, as each brings a different style of running. Ware more of a straight-ahead pounder who dishes it out as well as he takes it and Malepeai the slasher who provides great lower leg power. Neither player is a Ronald Jones ll, but they’re certainly good enough to contribute to a potentially good offense.

The Obvious: The first grouping of offensive linemen appears to be set if you consider senior Toa Lobendahn (photo above) as the likely replacement for former starting center Nico Falah.

The Not So Obvious: The O/NSO thinks that the battle for the backup spots for all positions will all be worth the price of admission, but we’re intrigued by the battle for the backup center position between youngsters Brett Neilon and Justin Dedich. However, that’s just one of the main interesting battles. Actually, we’re also intrigued just how dominate sophomore Austin Jackson can be at starting left tackle. Jackson could be as big a key to the offensive line’s ground production as anybody. With Roy Hemsley using a graduate transfer to Arizona State, it will be riveting to see how the depth of the 2018 O-line evolves into place.

The Obvious: The wide receiver battle between Randall Grimes and Velus Jones.

The Not So Obvious: Whether these two are actually pitted against each other remains to be seen, however, each has a big investment to make in the spring. For Grimes, there is still some question to burning his freshman eligibility, but he has a heck of a lot of talent and, of course, we keep hearing just how fast and explosive Velus Jones can be as he hits his stride. Both these players will be under the microscope.

The Obvious: Tight end could be a position of surprise.

The Not So Obvious: Surprise? Yep, much of it revolves around the health of Daniel Imatorbhebhe and his health and durability. Since that could be an issue, expect to see healthy competition from Tyler Petite, not the athlete of Imatorbhebhe but a hard worker nonetheless. It might be a little early, but if youngster Josh Falo can block consistently, he could make some real headway and throw his helmet into the ring. In fact, Falo is the O/NSO’s choice as one of the top stories in the spring.

The Obvious: It goes without saying that the biggest news before the hitting starts would be the return of defensive line coach Kenechi Udeze.

The Not So Obvious: Okay, we agree, enough of the Udeze is he coming or is he going? We’ll assume he’s back, and the biggest intrigue on his defensive line will be JC transfer Caleb Tremblay. The Trojans have gotten good mileage from some of their recent transfers or have you forgotten the likes of Stevie Tu’ikolovatu and the recently departed Josh Fatu? We’re intrigued by Trembley and the possibility of him not just being an important player for depth but making a push in the spring for a starting position.

The Obvious: Other than the offensive line starters, it would appear that the linebacking spots – at least the starters – look pretty obvious.

The Not So Obvious: While the starting linebacking unit looks fairly set, the O/NSO is very excited at the possibility that sophomore Levi Jones could make a significant push somewhere amongst the starting four…if you consider the starting four as Cameron Smith, John Houston, Porter Gustin, and Joseph Iosefa. Another player we want to see is early freshman enrollee and Hawaiian legend Kana’i Mauga, a real headhunter.

The Obvious: And finally, the Trojans secondary will need to be scrutinized, but there is some very intriguing talent that could push for playing time.

The Not So Obvious: Two players the O/NSO wants to see up-close are young safeties Bubba Bolden and early freshman enrollee Talanoa Hufanga, although it wouldn’t be a shock to see Hufanga work a little at linebacker, as well. In terms of the corners, well, Iman Marshall and Jack Jones would be the obvious starting choices, but for the sake of interest and curiosity, it will be fun to see how early admission freshman corner Chase Williams adjusts to the D-1 college game. All in all, there will be a lot to watch and analyze during March and April.