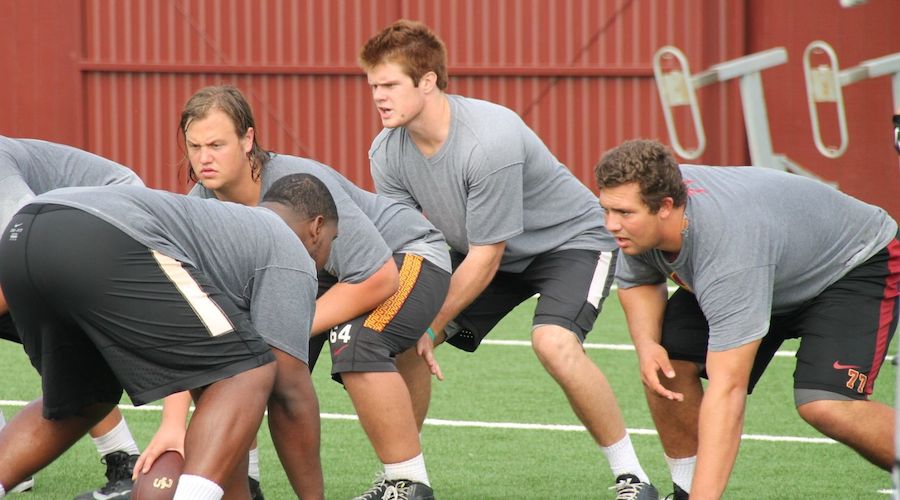 The Obvious: The USC Trojans took this week off for Spring Vacation and will resume hitting this Tuesday at 3:00 p.m. on Howard Jones/Brian Kennedy Fields.

The Not So Obvious: A reminder to those that will coming down for future practices on campus, unless there is a change, the 11-on-11 drills will continue not on the main field you see upon entering through Goux Gate, but the side practice field that is away from the public viewing area. If it’s permissible, the O/NSO suggests you watch practice from atop Dedeaux Field. The main field is still excellent viewing for individual position and 7-on-7 drills but not for general team drills.

The Obvious: Junior quarterback Max Browne got most of the first team reps before the spring recess and the results were predictably uneven.

The Not So Obvious: Last Saturday, Browne threw for two touchdowns but was intercepted three times. Even though Browne is considered the heavy favorite to open up against Alabama in the fall, you can be sure that head coach Clay Helton and his quarterback coach brother, Tyson Helton, will expect greater improvement from Mad Max, especially in the interception department.

The Obvious: Redshirt freshman quarterback Sam Darnold (above photo) is considered the signal caller that will eventually back up Max Browne in 2016.

The Not So Obvious: Darnold figures to get his opportunities in the coming days. In fact, the O/NSO predicts that San Clemente Sam will be better and better and could put some heat on Browne in the coming weeks, especially in scrimmage situations.

The Obvious: USC football has had some pretty catchy and memorable “names” in its glorious history, such a Cotton Warburton, Orv Mohler, Morley Drury, Gaius “Gus” Shaver, and Grenny Lansdell.

The Not So Obvious: The O/NSO has no idea if junior corner Yoofi Quansah (Chino Hills/UC San Diego) will be a USC star someday, but he’s certainly got his own name identity if he makes a cardinal and gold impact on the football field.

The Obvious: Much is being expected from sophomore defensive end Porter Gustin, who so far this spring has looked like a man amongst boys.

The Not So Obvious: Gustin is another Trojans defender that seems to be really thriving in Clancy Pendergast’s attacking defense. Looking much bigger than last season, Porter is now listed at 6-foot-5 and 250 pounds. Given his youth and obvious ability to increase in size, the sky is the limit for this Utah native’s future. Note: In a recent WeAreSC article by Johnny Curren, Gustin says he has put on additional weight from his listed 250 pounds and now weighs 262 pounds.

The Obvious: With a new defensive coordinator in Clancy Pendergast, there is always the question of does a player make a system or does the system make the players?

The Not So Obvious: If any Trojans defender can make claim that a system can make a player, it’s senior Leon McQuay lll. McQuay has had quite a rollercoaster career at Troy, but some of his best days were when he was younger and playing under Pendergast before Clancy was jettisoned by Steve Sarkisian. During the first week of spring practice, McQuay certainly looks improved, and Clay Helton believes that the return of Pendergast is a major reason for McQuay’s sudden consistency and effectiveness. McQuay played for Pendergast back in 2013, so Leon already knows the system.

The Obvious: Clay Helton is on record after the first three practices that he loves the aggressiveness of his defensive line, and when he stands behind the quarterback he, too, can feel the pressure from his front four.

The Not So Obvious: Conversely, of course, is the question of has the defensive line improved that much under new coach Kenechi Udeze, or is the “veteran” offensive line still a work in progress under first-year O-line coach Neil Callaway? Probably a little bit of both.

The Not So Obvious: Much has been expected from Green, and most Trojans fans remember his 31-yard touchdown fumble recovery and run in the 40-21 victory over UCLA. Thus far in spring ball, Green has impressed head coach Clay Helton with his grit, quickness, and determination.

The Obvious: During the spring buildup, Clay Helton said it was his intention to upgrade the production of the Trojans tight ends.

The Not So Obvious: In the early going of spring, the Trojans tight ends have been very active, and one of those that’s benefiting from Helton’s tight end focus is senior tight end Taylor McNamara, the former transfer from Oklahoma.

The Obvious: A number of Trojans are coming off of injury and are in the process of rehabilitation, thus not participating in spring ball or doing so in a limited fashion.

The Not So Obvious: One of those players coming off of injury and surgery and making his presence known is sophomore wide receiver Ajene Harris, the former Los Angeles Crenshaw star. Harris is coming off of 2015 hip surgery and has shown some of the flash in the first week of spring ball that turned some heads.

The Obvious: One of the noticeable differences between last season and spring ball is the size of the Trojan players.

The Not So Obvious: If you’ve heard from your friends and colleagues that have been to practice that senior left tackle Chad Wheeler is looking enormous, you have been given accurate information. Wheeler is listed on the roster at 6-foot-7 and 280 pounds, but after seeing Chad walk by the O/NSO a couple of times, it would be fair to say the height is accurate, but the former Santa Monica High star is definitely over 300 pounds. Thus far, Wheeler looks on track to return to his starting left tackle position.

The Obvious: And finally, the first week of spring practice was like the prologue to a book. It excites the reader, but it’s the body of the book that will decide the ultimate evaluation.

The Not So Obvious: The same could said of the way Clay Helton’s spring practice. Like his predecessors, Helton scheduled a full first week of spring ball before spring break and will be in the stretch drive the next four weeks. According to Helton, the first week of practice was the basic installment of the offense and defense and the next month will be fitting in the proper pieces. And for that, the intrigue of spring ball should make for some interesting interpretations.