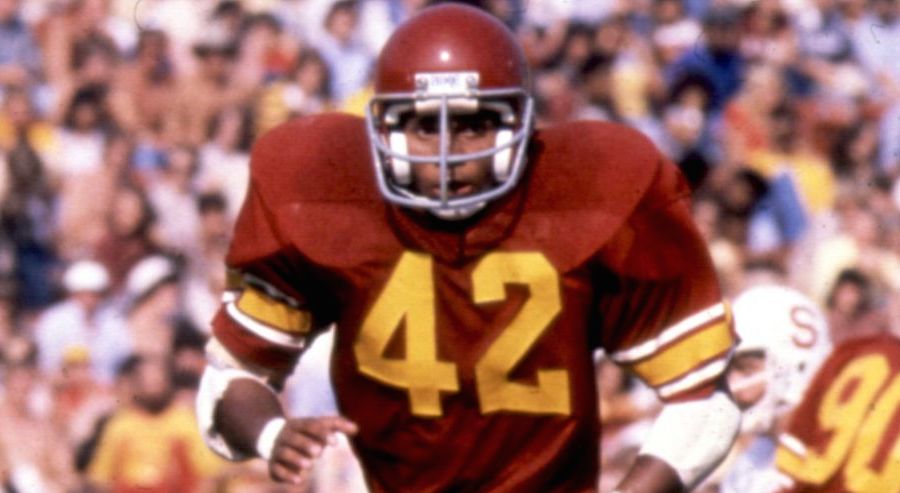 The Obvious: Ronnie Lott (photo above) is one of football’s greats from high school to USC to the NFL.

The Not So Obvious: Bill Hancock, Executive Director of the College Football Playoff (CFP), announced on Wednesday that Ronnie Lott has have been appointed to the selection committee by the CFP Management Committee. This is a three-year term. Other new members named were Paola Boivin, Joe Castiglione, Ken Hatfield, Todd Stansbury and Scott Stricklin. Guess Trojan fans can have faith now that in the future the cardinal and gold will be represented at the CFP committee level at some level.

The Obvious: Of the four NFL teams vying for a spot in Super Bowl Lll, three of those teams (Jacksonville, Philadelphia, and Minnesota) have a Trojan representative on their roster.

The Obvious: Former Trojan wide receiver Nelson Agholor, now in this third season with the Eagles after being a first-round draft pick in 2015, is a starting wide receiver for the Philadelphia Eagles, which will host the Minnesota Vikings on Sunday (3:40 pm PT/FOX) in the NFC Championship Game.

The Not So Obvious: Agholor’s early career began with ups and downs and constant struggle, but he never gave up. Nelson, who will wear No. 13 on Sunday, said, “I don’t really think about what I went through (in the past). It’s football. Sometimes you don’t make the greatest plays. For me, it was about continuing to get better each year and trying to get comfortable with being who I know I could truly be. It’s not about me feeling like, ‘Oh my God, everything was terrible.’ Not everybody steps into this league and dominates Year 1 or Year 2. You have to have the mindset of progression each year and trust that. I think that for me that’s where I’m at and I’m happy that people trusted the continual growth in me and people put me in position to continually grow.”

The Obvious: Former Trojan wide receiver Marqise Lee, now in his fourth season after being originally drafted by Jacksonville in the second round (39th overall) of the 2014 draft, has shown steady improvement, and now he and his team travel to New England the AFC Championship on Sunday (12:05 pm PT/CBS).

The Not So Obvious: Marqise, who will wear No. 11 on Sunday, was the seventh Trojan draft selection by Jacksonville in the history of the franchise. He played in 14 games this season and averages 9.3 yards per catch. Last Sunday against Pittsburgh, Marqise caught three passes for 28 yards. Against the Steelers, Lee’s first catch (13 yards) was on the opening touchdown drive and he later converted a third-and-2 (four-yard catch). In the second half, Lee’s 11-yard catch converted a third-and-8. He continues to make steady progress.

The Obvious: Former Trojan defensive end Everson Griffen, now in his eighth season in the NFL after being draft in the fourth round back in 2010, is a starting D-lineman for the Minnesota Vikings and was recently named to the 2018 NFC Pro Bowl roster.

The Not So Obvious: Who can forget how Everson announced he was going to the NFL early. Not waiting for a press conference or social media text, he announced it on the field after the Trojans’ 2009 Emerald Bowl victory over Boston College in San Francisco. Griffen, who will wear No. 97 when he lines up against New England on Sunday, said right after last week’s miracle win against New Orleans, “I’m happy. I was sad. Now I’m like — wow. I, oh, my goodness, I’m shocked. I don’t know what else to say.”

The Not So Obvious: Needless to say, Kennedy will always be beloved by the Trojan family, and there are those that would love to see him fill the current Troy’s running back coaching position made possible by the departure of Deland McCullough to the Kansas City Chiefs. However, the O/NSO doesn’t expect Polamalu to return to Troy, but it wouldn’t shock me in the future if his name isn’t eventually mentioned for the Mater Dei High School job when current legendary Monarchs’ head coach Bruce Rollinson elects to retire. Kennedy played his prep ball at Mater Dei.

The Obvious: This past Monday was the deadline for any current eligible Trojan to enter the 2018 NFL draft, which means the final Trojan to declare for the NFL was defensive end Rasheem Green.

The Not So Obvious: With the blessing to go pro by defensive line coach Kenechi Udeze, the draft value of Green was that in the 2017 season, Rasheem was third in the nation in sacks, which didn’t go unnoticed by ESPN draft guru Mel Kiper Jr., who has No. 94 listed as the third best defensive end in the 2018 draft. There is a growing list of experts that say Green could be a late first round selection.

The Obvious: The USC Trojans will travel to play the 2018 Arizona Wildcats on Sept. 29.

The Not So Obvious: It should be one of the interesting games next season, as the Trojans will face a Wildcats’ team lead by recently hired head coach Kevin Sumlin, who was 51-26 in six seasons as the head coach at Texas A&M. Considering that Sumlin had Johnny Manziel as his quarterback during those successful seasons, it will be interesting to see what he does with explosive quarterback Khalil Tate. FYI, former Texas A&M and UCLA offensive coordinator Noel Mazzone will follow Sumlin to Tucson as the new OC. And, BTW, Sumlin predicted Arizona would go to the Rose Bowl, but he didn’t say when.

The Obvious: One of the Trojans’ remaining big time recruits for the Class of 2018 is Mission Viejo (Calif.) High CB Olaijah Griffin, a former UCLA commit.

The Not So Obvious: Given the dramatic need for cornerbacks, a Griffin commitment would be a major coup for Clay Helton’s recruiting class. It was interesting to see that the two-way star Griffen was wearing No. 2, Adoree’ Jackson’s old USC number, in a social media photo. You don’t think that Helton suggested that Olaijah would be a perfect fit in filling the role of the once multifaceted of Adoree’, do you? Nah (wink).

The Not So Obvious: Make no mistake about it, the Trojans need standout corners and Taylor-Stuart takes a backseat to nobody in this secondary recruiting class. If the Trojans could secure both Taylor-Stuart and Olaijah Griffin, they would be in great shape for the future.

The Not So Obvious: Although the 6-foot-4 Williams is currently an Oregon verbal, he did say in social media that he had a good visit. More importantly, however, is the fact that his parents were also on the USC campus visit. It certainly doesn’t hurt when a local kid visits Troy with his parents. It’s a lot easier to watch, follow, and communicate with your son when he is living in Los Angeles rather than Eugene.

The Obvious: The New York Giants are expected to name Pat Shurmur as head coach.

The Not So Obvious: Shurmur is currently the offensive coordinator for the Minnesota Vikings, and you don’t think that Sam Darnold is paying attention to that possibility? BTW, ESPN draft guru Mel Kiper now sees Sam going to the Denver Broncos as the fifth pick. I am sure that Broncos’ CEO John Elway see a lot of himself when he sees Darnold. The Broncos would be thrilled if No. 14 became available.

The Obvious: And finally, the Houston-based Lombardi Foundation announced 21 candidates for the 2017 Lombardi Award, which will be presented to an NCAA Division I player, regardless of position, based on performance, leadership, character, and resiliency.

The Not So Obvious: Although there were no Trojans  candidates for this year’s award, the Cardinal and Gold do have a past winner in former All-America offensive guard Brad Budde (1979). And you don’t think that Trojans’ offensive line coach Neil Callaway could use a Brad Budde in his starting five for 2018?