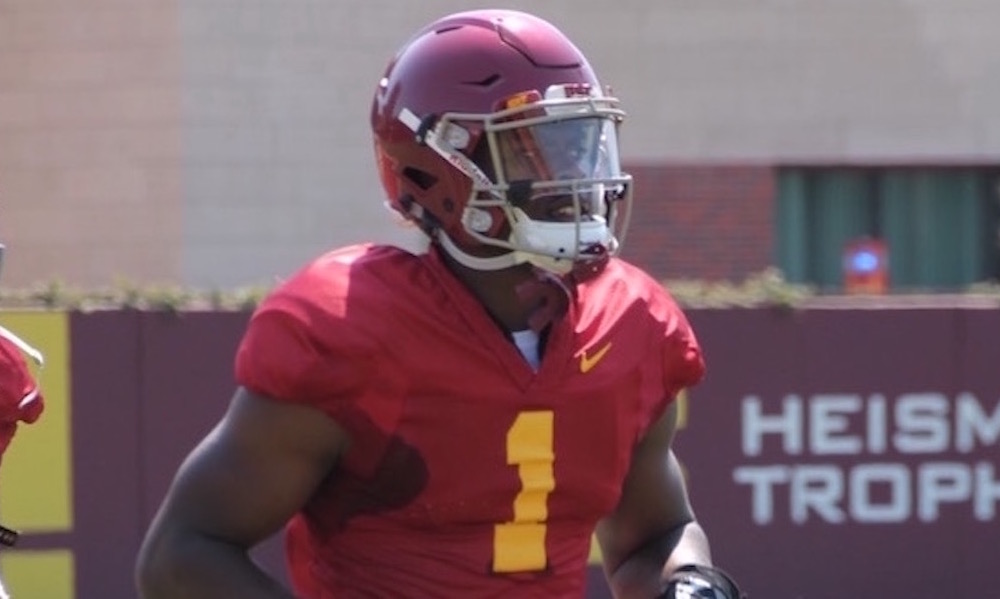 The Obvious: With the Trojans looking forward to Saturday’s second on-campus scrimmage of training camp, one of the main areas to scrutinize will be the talented but inexperienced receiving corps.

The Not So Obvious: Fear not, Trojans fans. Although the Men of Troy did lose two standout starting receivers in JuJu Smith-Schuster and Darreus Rogers, there are excellent replacement candidates. According to receiver coach Tee Martin, not to worry. Martin says, “Not concerned at all. They are doing good, coming along, a very talented group. They’re big, fast, physical and great route runners, learning a lot. I’ve thrown a lot of football at them, and Sam (Darnold) is doing a really good job not just now, but it started in the spring in throwing them the football in the off-season with the other quarterbacks. Deontay Burnett, Jalen Green, Steven Mitchell, they’ve played a lot of football here and are doing a good job of leading the group and pushing them (the freshmen).”

The Obvious: One of those wide receivers expected to make an impact in 2017 is redshirt freshman wide receiver Tyler Vaughns (photo above), the former superstar ball catcher from La Puente (Calif.) Bishop Amat.

The Not So Obvious: Regarding Vaughns, Tee Martin says, “Man, he has it all – size, speed, great hands, acrobatic, tough, everything you look for in a wide receiver. He has learned a lot of football and has gotten stronger in the weight room. He put in the work in the off-season to get stronger. We challenged him to gain weight. He has earned the right to go with the starters in the spring and he is in the rotation right now.”

The Obvious: Although there is still intense competition in training camp, it appears that wide receiver Tyler Vaughns (6-2, 187) has placed himself in a strong position to lock down one of the starting spots.

The Not So Obvious: According to Vaughns, “Everything is going good right now. I mean the team is looking good and so is the offense. I am not where I want to be, but I am never comfortable where I am at. I need to work harder more so on the field and getting my body more healthier and all that. I need to work on getting in and out of my breaks (cuts) and get into transition faster. It would mean a lot to start (against Western Michigan). All the work I put into last year and into the spring, I am a more solid receiver for USC. The strength of my game is the 50-50 balls and route running.”

The Obvious: Sam Darnold is working extra hard to learn as much as he can about the strengths and weaknesses of his new receivers.

The Not So Obvious: One thing that Darnold can’t do is give his new receivers experience. Philosophically, Sam says, “Some guys rise to the occasion when the lights get brighter and some shrink.” Darnold’s statement was not aimed at any current player but more of a general observation, and you never know how a player will perform in game before a huge crowd and national television.

The Obvious: Defensively, all eyes continue to focus on the Trojans defensive line – specifically nose tackle – and the attempt to replace departed superstar Stevie Tu’ikolovatu.

The Not So Obvious: Thus far, the candidates to replace Tu’ikolovatu are true freshmen prodigies Marlon Tuipuloto (6-3, 295) and Brandon Pili (6-4, 320) and seniors Josh Fatu (6-2, 315) and Kenny Bigelow (6-3, 300). According to second-year D-line coach Kenechi Udeze, “At this point, everybody is doing a great job and understanding what we want from our defense, our assignment, our alignment. What it comes down to is as we finish our training camp, it’s just understanding the consistency of the position and knowing the guy we are putting in that position is a technician over and over and over again. Nothing is etched in gold until somebody proves it. Everybody has done a pretty solid job from Kenny (Bigelow), (Brandon) Pili, Marlon (Tuipulotu), and Joshua (Fatu). So, again, as time progresses, the leaders are going to stick out as we get ready for Western Michigan.”

The Obvious: D-line coach Kenechi Udeze has a great deal of respect and expectations regarding the return of senior nose tackle Kenny Bigelow from a second knee surgery.

The Not So Obvious: Reflecting on the return of Bigelow, Coach Udeze said, “Kenny has done a tremendous job, a young man that has dealt with a great deal of adversity since he’s been here. I commend him for still showing up, giving me everything he’s got on a day-to-day basis, and more importantly, being a big brother to the younger guys and teaching the young guys with things they’ve been struggling with.”

The Obvious: The Trojans are hopeful that Kenny Bigelow can be a constructive contributor, but there is guarded optimism as to fast Bigelow can return to “football shape.”

The Not So Obvious: Regarding his comeback and his biggest challenge, Big Kenny said, “It’s football conditioning, something you can never get from rehab no matter how many times or how hard you go through it, and summer conditioning the same way. Football shape is a monster of its own; it’s something I have got to get back into. I feel like my movement is good and I feel I need to do better with some of my football techniques, but physical movement I feel I am doing fine, yes.”

The Not So Obvious: Regarding the competition from the youngsters, Kenny Bigelow says, “They’re great young guys, and I think they’re going to be great young players in the future. Brandon is going to be more of a Stevie (Tu’ikolovatu) kind of guy – bigger guy, able to hold gaps – and, Marlon, he’s got some real quickness and some real pop to him.”

The Obvious: There are high expectations that as the defensive line gains more experience and help from the younger players, this could evolve into an exceptional unit.

The Not So Obvious: From a players’ perspective, Kenny Bigelow is very high on his D-line teammates. Bigelow says, “Overall, top to bottom and left to right, I think we look great on the defensive line. Uchenna (Nwoso) and Porter (Gustin), they’re going to be animals to every team in the Pac-12. Rasheem (Green) is going to be a dominant guy for us this year. Christian Rector and Malik Dorton are coming into their own this year. They’re going to help us this year and make us tough to beat with that much more depth.”

The Obvious: Some are calling the Trojans offensive line the team’s weak link on the entire team.

The Not So Obvious: Nonsense. The O/NSO doesn’t subscribe to that evaluation. The core returning linemen are experienced and talented. Yes, there is no consensus group of five that is the foundation just yet, but there is a massive amount of playing experience, and it’s just a matter of time for some positions to be sorted out. For those ready to push the panic button, the word “patience” would be well advised. There is, however, a developing story at left guard where junior Chris Brown (6-5, 310) is trying to withstand the challenge of sophomore Roy Hemsley (6-5, 315). Keep an eye on this left guard competition. Hemsley is definitely making a push to start.

The Obvious: The Trojans probably have more depth and more talent at tight end than they’ve had in a long time.

The Not So Obvious: The problem is that three of those gifted tight ends have been out with various ailments (Daniel Imatorbhebhe (6-3, 235) – hip flexor, Tyler Petite (6-4, 250) – concussion protocol, and Josh Falo (6-6, 235) – (knee). Clay Helton is hoping for a quick return. However, on the bright side, tight ends Cary “Big Bird” Angeline and Eric Krommenhoek have picked up the slack. At 6-foot-7 and 245 pounds, Angeline can be a nightmare for smaller defensive backs, and Krommenhoek, 6-foot-5 and 245 pounds, has generally been an intriguing receiver for much of training camp.

The Obvious: The Trojans are loaded at running back.

The Not So Obvious: And, yes, you heard right that junior tailback Dominic Davis played some corner at Thursday’s practice, and it appears that Dominic may be looking at playing time and his future. Whatever the reason, the O/NSO thinks he’s making a wise decision in at least giving it an audition. FYI, Dominic did play some DB at Mission Hills (Calif.) Bishop Alemany High back in his prep days.

The Obvious: With quarterback Sam Darnold on its regional cover this week, Sports Illustrated published its 2017 Top 25 teams and a list of its Top 100 college players.

The Obvious: And finally, the Trojans open the season on Saturday, Sept. 2, against Western Michigan in the Coliseum.

The Not So Obvious: However, four Pac-12 teams open their seasons before the Trojans. On Saturday, Aug. 26, Oregon State travels to Colorado State while Stanford and Rice battle it out on Thursday, Aug. 31, in Sydney, Australia. In addition, on Friday, Sept. 1, rivals Colorado and Colorado State have at it in Denver.