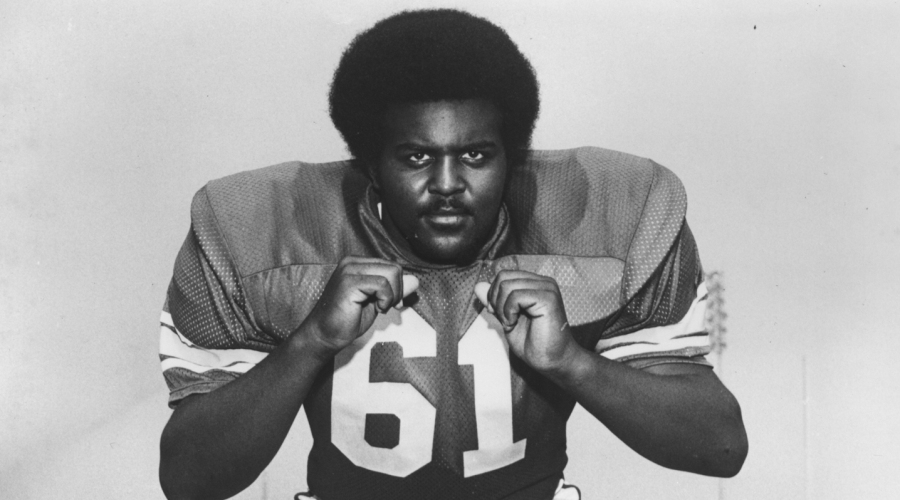 The Obvious: Donnie Hickman, a two-year starting offensive guard at USC who was a member of the Trojans’ 1974 national championship team and a 1976 first-team All-Pac-8 selection, died last Saturday of cancer in Glendale, Ariz.  He was 60.

The Not So Obvious: For many younger Trojan fans, Donnie Hickman (above photo) probably won’t ring a bell. However, the O/NSO remembers Donnie (1974-76) during his playing days, and he was a very nasty 6-foot-3, 250-pounds of muscle. You could have made an argument that in playing next to All-America tackle Marvin Powell in 1976, they formed the best tackle-guard tandem in the country.

The Obvious: Gary Jeter is a former Trojans All-America defensive lineman who was a teammate of Donnie Hickman and often battled Donnie ferociously in practice.

The Not So Obvious: On social media, Jeter wrote, “The Trojan family has just lost a true warrior from the class of 1977. All American Guard Sweet Donnie Hickman from Flagstaff, Arizona. Introduced me to the beautiful metal turquoise. We had legendary battles in the PIT at SC. We made each other tough!!!!! Did we like one another NO……did we respect one another without question.! We all are going to miss you!!! See you in the after life….we will continue our battles then. My deepest sympathy to His wife Bridgett and family……FIGHT On!!!”

The Obvious: Donnie Hickman, who wore No. 61 with the Trojans, was the consummate, physical collegiate offensive guard during the John McKay and John Robinson eras.

The Not So Obvious: Donnie Hickman played professionally for the Detroit Lions and the Washington Redskins and a spent a number of seasons in the Canadian Football League. A Flagstaff, Arizona, native, in 2014 he was inducted into the Flagstaff Athletic Hall of Fame. After his professional playing career was over, Donnie spent time as a football coach for Glendale and Mesa Community College.

The Obvious: Donnie’s son, Justin Hickman, was an All-America defensive end at UCLA.

The Not So Obvious: Justin truly followed in his father’s footsteps by playing in the NFL and now currently in the CFL.

The Obvious: It is often said that offensive linemen play in anonymity.

The Obvious: The Trojans continue to have spirited summer volunteer workouts that are being reported and videoed by the various Trojans media outlets.

The Not So Obvious: The reporting of the workouts is very good, and fans get an excellent chance to get a good look at many of the new freshmen. The question becomes how much can you really learn from these workouts? Well, for one thing you can see effort and team bonding.

An often unnoticed aspect of the workouts is not who shows up, but who does not and for what reason. Even though there are a lot of smiles and ribbing during the workouts, one can also tell just how competitive the players are in facing each other.

The best way of putting these summer workouts in perspective is using baseball as an analogy. It’s one thing to take batting practice in a cage with nobody watching and quite another to face a live pitcher in front of 50,000 fans with national TV cameras.

The Not So Obvious: With his track obligations completed, it didn’t take long for Adoree’ to show his strengths as a cornerback. He has been in the thick of it, and you have to love the matchups between him and wide receiver all–star candidate JuJu Smith.

The Obvious: It is being reported that NFL scouts will evaluate JuJu Smith during his sophomore season.

The Not So Obvious: Shocking. Who would have thunk the NFL would be interested in JuJu Smith as a sophomore? To put it more bluntly, the sun rises in the east and sets in the west.

The Obvious: Trojans Hall of Fame football coach John Robinson was once the head coach of the old Los Angeles Rams.

The Not So Obvious: In a social media video, Robbie says he believes the Rams are returning to Los Angeles and will be joined by the San Diego Chargers. Sorry Raider fans.

The Obvious: The Trojans will travel to play Colorado this season in chilly mid- November.

The Not So Obvious: Colorado will be wear a new “Frosted Steel” uniform this fall, which is appropriate considering the expected “weather factor” for game day might possibly be frosty.

The Obvious: The USC Ticket Department sent out an earlier email announcement that football season tickets would be sent out in July and August.

The Not So Obvious: Well, it’s July and better start checking that mailbox for that much anticipated package of joy.

The Obvious: Running backs Ronald Jones ll and Dominic Davis are two of the fastest incoming back in the country.

The Not So Obvious: Don’t know about you, but the O/NSO can’t wait to see Jones and Davis run in their first Trojans scrimmage. If they can take the pounding as true freshmen, they could be a real treat to watch.

The Obvious: The Trojans host Stanford on Sept. 19 to open Pac-12 play.

The Not So Obvious: The O/NSO has said it before, but it bears repeating. The Trojans game against the Cardinal could be the biggest game of the season. A win over what figures to be a very motivated Stanford team, led by surging Cardinal senior quarterback Kevin Hogan, would really be a real confidence builder for Sark’s men, especially with the a trip to Arizona State the following week. A loss to the Cardinal could present a real rebounding challenge for the balance of the season.

The Obvious: And finally, the Trojans received a verbal this week from Rancho Cucamonga DB Thomas Graham for the class of 2017.

The Not So Obvious: Two things about the Graham announcement stand out to the O/NSO. First, he was recruited by the likes of UCLA, Oklahoma, and ASU, so that speaks for itself regarding his talent level. Much of Graham’s recruiting suspense was alleviated knowing his sister would be attending Troy to run track next season. There’s nothing like blood being thicker than recruiting, and in the world of recruiting, you’ll take‘em any way you can get’em.