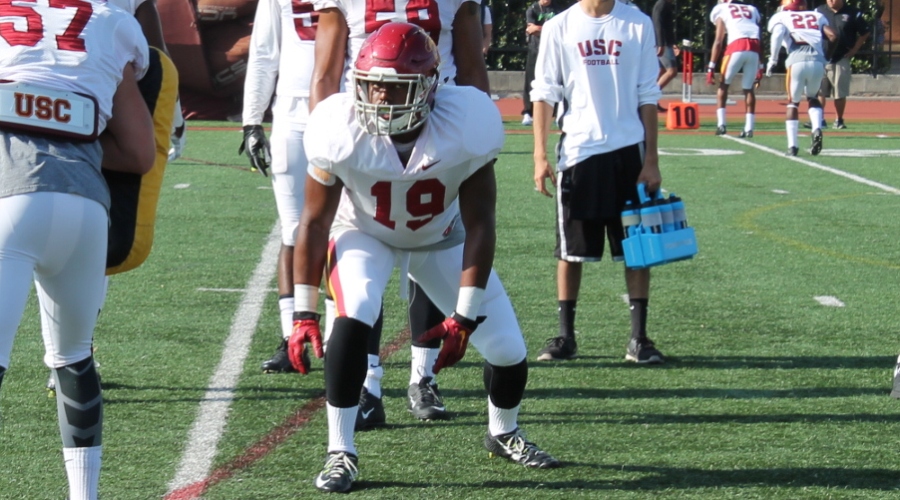 The Obvious: While the USC Trojans head into Saturday’s shortened public scrimmage on campus (10 a.m.), it’s become quite clear the new coaching staff changes by head coach Clay Helton and his new vision has rejuvenated the careers of a number of returning team members.

The Not So Obvious: Combined, it would be safe to say that Helton’s staff redo has affected seniors such as inside linebackers Michael Hutchings (above photo) and Quinton Powell, defensive end Jabari Ruffin, and safety Leon McQuay lll. All four of these elder cardinal and gold statesmen have greatly benefited with the return of defensive coordinator Clancy Pendergast, who saw potential with all four players back in 2013 when Clancy was in charge of the defense.

The Obvious: As mentioned, one of those rejuvenated players is Michael Hutchings, the former Concord De La Salle superstar linebacker, who sees the benefit of once again being coached by Clancy Pendergast.

The Not So Obvious: Regarding Pendergast, Hutchings said, “That’s one thing about Clancy, he just stays level everyday. We get the same guy – no ups and no downs. Everyday, you get the same coach in Clancy, and I think that’s what all these coaches are all about. I think that’s what Coach Helton wants. Everyday is going to be high intensity no matter what. No matter what the performance the previous day.

The Obvious: Defensive coordinator Clancy Pendergast is on record as saying that all 11 positions are open on defense, and there are no “anointed ones.”

The Not So Obvious: For a veteran like Michael Hutchings, this certainly makes his final spring at USC one of opportunity. Hutchings said, “With Coach Pendergast, it’s definitely great to have him back. It’s a little bit easier for myself and some of the other guys to pick up things, but it’s still a new defense from two years ago, so there is going to be some ups and downs and things we need to fix. We might be a little bit ahead of guys that weren’t here before, but it’s still kinks that are going to be made, and that’s part of spring ball.”

The Obvious: Michael Hutchings doesn’t see himself as “filling in” for 2015 Freshman All-America inside linebacker Cameron Smith, who is currently being held out of spring hitting while recovering from knee surgery.

The Not So Obvious: Asked if he sees himself as a fill-in until Smith returns, Hutchings said bluntly, “No, when you come out here, you don’t think where you are on the depth chart. You come out here to compete. No matter where you are, you compete. The ones, twos, and threes, all that can change. In spring ball, they try all different kinds of combinations. This is where you are showing what you can do. You’re not really trying to keep a spot, you’re just putting on tape what you can do. You come back in fall camp, and that’s when those things are decided.”

The Obvious: For much of his USC career, Michael Hutchings has played inside linebacker.

The Not So Obvious: Discussing his role as an inside linebacker and a new system, Hutchings said, “The terminology changes with coaches, but things don’t change too much. It’s a similar scheme and the same principals, so it’s similar to what I did last year. A lot of the same techniques. Football might be different in coverages. For me and the linebackers, it’s kind of the same stuff. It’s a lot of head-banging into the middle. It’s just football and a hard game at linebacker. You’re in the trenches, and you’re going to have to take on blocks everyday.”

The Obvious: Thus far in spring ball, the offense appears to be ahead of the defense, and a veteran linebacker like Michael Hutchings can see a difference this spring.

The Not So Obvious: Hutching said, “You see us running laps after practice every day, we’ losing the competition to the offense. Right now the offense is rolling. I see it every day coming out here and beating us down. It’s shows that those guys have been together for a long time. They’re showing what they can really do. The offensive line is getting very good every day. Each day it’s getting tougher and tougher for the defense to run against them. We have to tip our hats to them each day because they’re not slowing up each day.”

The Obvious: The Trojans will hold their annual spring football game in the Coliseum on Saturday afternoon, April 16, at 3 p.m. PT.

The Not So Obvious: Defending CFP National Champion Alabama Crimson Tide, the Trojans first opponent for 2016, will also hold its spring game on Saturday afternoon, April 16, and it will be televised on ESPN (3 p.m. ET).

The Obvious: There is no fancy name given the USC Spring Game.

The Not So Obvious: Alabama refers to its spring game as “A-Day.”

The Obvious: It wouldn’t be shocking if USC eventually names the actual Coliseum playing field after a legendary football player.

The Not So Obvious: Of course, money would probably play a part in the process. For example, Colorado State has announced that the name “Sonny Lubick Field” will continue at the university’s new on-campus stadium when it opens for the 2017 season, thanks to the second $20 million gift announced this month. Hmmm. Maybe one day the Coliseum will have “O/NSO Field,” but raising 20 million for a university gift might be a tad challenging.

The Obvious: This Saturday will be the 36th annual Swim With Mike swim-a-thon at USC’s Uytengsu Aquatics Center to raise money for the nation’s leading scholarship fund for physically challenged athletes.

The Not So Obvious: Swim with Mike begins at 7:30 a.m. with the opening of the “treasure chest” in front of the Lyon Center. Football practice, of course, is open to the public next door on Howard Jones Field from 10 a.m. to noon followed by the “Football & Song Girl Relay” in the pool at 12:30 p.m. The barbecue will take place from 11 a.m. to 2 p.m.

The Obvious: It figures that as USC gets more into Coliseum bookings, you can expect some real headliners making their appearance in the Grand Old Lady.

The Not So Obvious: Michigan is using its famed “Big House” by hosting an international soccer match between Real Madrid and Chelsea at Michigan Stadium on July 30. No word of Jim Harbaugh had to give final approval.

The Obvious: And finally, the USC Football Coaching Clinic, featuring the Trojans staff and some guest lecturers like former Trojan DB and current Rams coach Jeff Fisher, is this weekend (Friday/Saturday) at the John McKay Center on campus.

The Not So Obvious: With the Trojans “new” Clay Helton environment, a large gathering of high school and junior college coaches is a big deal. And thus far, Helton will have plenty to show and interact in terms of public relations and field activity. The coaches will also get a chance to watch Saturday’s practice and see some of the theory put into practice.